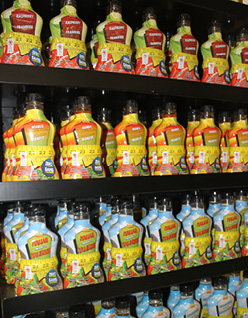 One way to define 3Gyros is by its growth.

After six long years of economic struggle and strife in the small town of Amherstburg, Ont., 3Gyros, a small Canadian business, has managed to experience a whirlwind of prosperity.

Business plans will provide you with a general idea or scope for the future, but when the right opportunity knocks, an entrepreneur must be able to change gears. The business that initially began as a restaurant quickly transformed and changed focus and ultimately became a national salad dressing leader.

3Gyros began their retail venture bottling the salad dressings the old fashioned way, with a whisk and funnel in hand, within their restaurant operation. With the help of Walmart, this small company that was originally only capable of producing 30 salad dressing bottles per hour, has now evolved to a complete manufacturing food processing plant,  capable of producing 3,000 bottles per hour, enough to satisfy and delight all Canadian and U.S. customers alike.

There was a lot of work in developing a retail stable Greek salad dressing. According to Zikantas, it took about two years to get everything right, from the texture/recipe formulation, the packaging, to the marketability of the brand.

The Greek dressings were initially tested in specific Wal-Mart Supercentres to determine their sustainability and potential. “There is a lot of behind the scenes work to develop any kind of product,” Zikantas said. “The products sold very well and as a result Walmart decided to expand the products in additional markets.  As a result, we increased the test market to include additional stores in southern Ontario, and then we went full launch in all of the Canadian Walmart Supercentre stores.”

“Very few opportunities are afforded to smaller players because of the advantages larger manufacturers have in the marketplace. We’re lucky that the right person came in and the right product. We were in the right place at the right time.”

Upon securing its national distribution across all Canadian Walmart Supercentres, it was at this time when 3Gyros began to evaluate its next steps, studying its marketplace, the demographics, and its respective industry as a whole.

“We’re in an industry that needs to move closer to health and wellness.  After determining what our consumer wanted and most importantly what they deserved, we decided to give them the healthiest salad dressing in the market. Heck, if you’re going to do something, do it right,” Zikantas said. When opportunity and hard work meet, great things happen. “We ultimately leaped the competition with an innovation that has propelled us to the head of the line.

Being the only Zero Calorie, Zero Fat, Zero Sugar, Low Sodium, Gluten Free salad dressing producer in Canada, we are absolutely delighted to offer customers the healthiest and tastiest salad dressing alternatives in the market today.”

Establishing its niche, 3Gyros again went back to the drawing board, studying product innovation, while also subscribing to a core focus of corporate responsibility. With this, 3Gyros began focusing upon its product marketability.

“Seventy per cent of the purchasing decisions are made in the salad dressing aisle, so how do we stack up compared to everyone else on the shelf? Many categories including juices and snack foods were taking advantage of new packaging technologies, but this did not appear in our category,” Zikantas recalled.

“Recognizing this ultimately led to the development of our second generation packaging that quickly grabbed the consumer’s attention while simultaneously delivering our health and wellness message.

“With this new and exciting approach to the salad dressing category, we were able to increase distribution in the United States, and list with additional Canadian retailers. Buyers and customers love it, and everything is absolutely flying right now. In fact, we are pleased to be finalizing a deal with Essex Angel Capital Corp (TSX VENTURE:EXC.P) which allows us access to the necessary capital to accommodate this explosive growth.”

According to Zikantas, “Now we’re unstoppable. What appeared as a fluke coincidence with a Walmart executive popping into the restaurant for lunch one afternoon has completely transformed the company into a national brand. It’s absolutely crazy.”