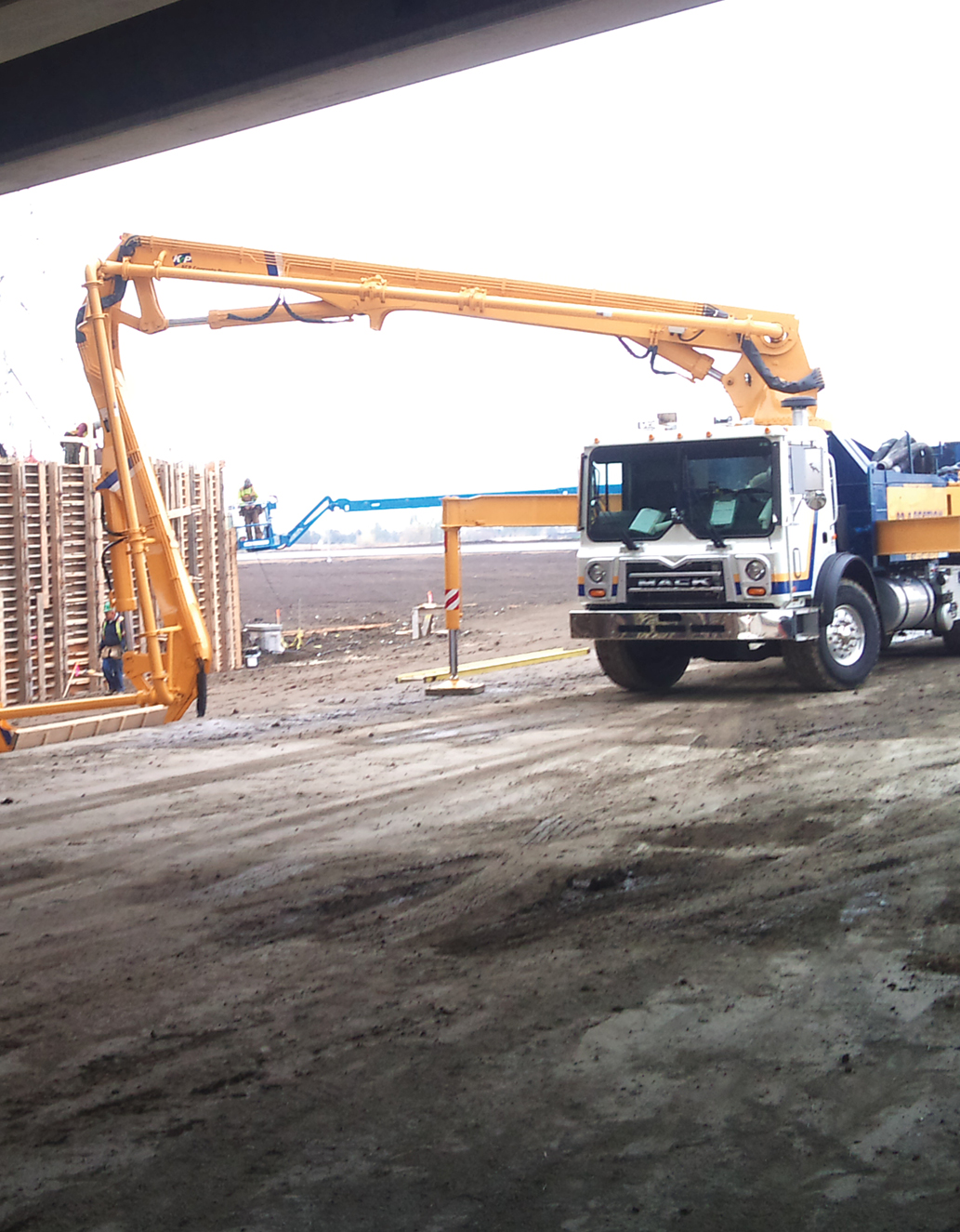 Established in 1978, A & B Concrete Pumping specializes in custom concrete pumping applications. With over 35 years of experience in the marketplace, the company is an industry leader and the go-to operator for projects ranging from Edmonton, to Barrhead, Fort McMurray, Saskatoon, and Regina. Family owned and operated, A & B Concrete Pumping is part of a concrete pumping group that is the largest concrete pumping service provider to the Western Canada, currently operating with 54 pumps, two Placing Booms, and two Telebelts.
Given its knowledge and experience in the industry, A & B Concrete Pumping works across several sectors, including residential construction, commercial construction, and heavy industrial applications. The company supplies concrete pumps and telebelts to construction sites and efficiently brings the foundations of construction within reach, whether it is a high rise application or a house foundation. A & B is the company of choice for many owners and contractors.
“If the application requires concrete, we can pump it,” Jason Mercier, President of A & B Concrete Pumping, told The Canadian Business Journal. “For instance, in Edmonton alone, we have 24 concrete pumps of various configurations, from line pumps right up to 56-metre boom pumps and telebelts.”
Projects
The company has been intimately involved with many projects in the Alberta’s capital, such as in its early days when it provided concrete pumping for several marquee projects, including work with West Edmonton Mall and Commonwealth Stadium.
More recently, the company has been a major player within Edmonton’s residential construction industry, and it has also completed a wide range of commercial and industrial projects in the city. The effects of Alberta’s booming oil and gas sector have also been realized by the group’s concrete pumping entities, completing residential, commercial, and industrial projects across Northern Alberta and throughout Saskatchewan.
The company also operates across all major construction sectors in Saskatchewan, primarily operating in commercial, potash mining, and uranium mining. Across its Saskatoon and Regina operations, A & B Concrete Pumping manages 11 concrete pumps, ranging from line pumps to the 55-metre boom pump and a telebelt. The company is continually involved in a range of projects, and sees its own growth as an organization through increasing its equipment fleet or expansion into new markets.
Industry Leader
Despite its longstanding expertise in the marketplace, A & B Concrete Pumping also recognizes some challenges that come with the industry, such as attracting a skilled labour force. A & B Concrete Pumping offers leveraged technology when it comes to their concrete pumps to ensure that the company has the safest and most user friendly equipment for its operators. The end result is better value for customers.
“In the last few years, concrete pumps have become bigger, have longer reaches, and they have more ability to adapt to job sites giving our clients what they need,” Mercier explained. “Our mission statement is, ‘We efficiently bring the foundations to construction within reach’, where with our diverse fleet of equipment, we are the No. 1 service option for our clients.”
As a founding member of the Concrete Pumping Association of Canada, A & B Concrete Pumping is a leading advocate of growing and strengthening its industry. The company is a committed voice and leader in bringing forward the knowledge, technology, and safety of the industry.
The company has also been recognized by the Canadian Construction Association, and in 2011 A & B Concrete received Excellence in Innovation award. A & B Concrete Pumping developed a concrete washout program which greatly reduces on-site concrete waste, which can then be cleaned and recycled, highlighting the company’s focus on environmental sustainability. Actively involved across the industry, A & B Concrete Pumping also worked alongside the Canadian Standards Association to develop the proper protocols associated with the concrete pumping.
“Concrete pumps have been around for more than 40 years,” Mercier concluded, “but we have a relatively new and emerging industry, and we want to be a big part of making our industry stronger”.
www.abconcretepumping.com
Recommended
CBJ Aug 2021 | Volume 14 | Issue 8