A new community hub in Canmore 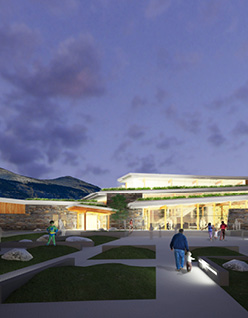 The town's multi-million multiplex is a welcome addition for everyone

Located in Alberta’s dramatic, picturesque Bow Valley, the town of Canmore sits nestled amongst the Three Sisters, Mount Lawrence Grassi, Lady McDonald and Grotto Mountains and its origins date right back to the 1880s. Conveniently placed just 50 miles west from Calgary—but a world away from the daily grind and trappings of the metropolis rat-race—this handsome and popular municipality plays domicile to over 12,000 dwellers as well as countless skiers, leisure and pleasure seekers seasonally.

“Visually, Canmore is an incredible place, but on top of that it’s the community underlying it that makes it such a wonderful place. People come here for the lifestyle, that’s really what drives us,” Mayor Ron Casey says.

“It’s the pace of the community, the festivals, and the true sense of it. Everyone has spent so much time working to preserve and keep the community alive, it is an extremely vibrant and exciting place to live.”

A historical and long-established community, Canmore’s main street is lined with buildings dating back over 100 years and its exceptional beauty and aura is the product of years spent preserving its character. A new development is, of course, both a thrilling and carefully-orchestrated addition to the town, and the planned C$39 million, 77,000 square foot Canmore Multiplex will offer new facilities, business and enjoyment abound for local people in keeping with its time-honoured appeal.

As a project funded through the Province of Alberta’s Municipal Sustainability Initiative (MSI), The Canmore Multiplex currently under construction at 700 Railway Avenue will provide numerous different facilities. Its goal? “To be an inspiring gathering place that enriches the well-being, enjoyment and aspirations of the community,” officials state. The build includes, but is not limited to, an aquatics centre with various swimming pools, leisure beach, steam room and water slides; a climbing centre with a 7,000-plus square foot climbing wall facing Three Sisters, a library totalling 11,500 square foot including technology and children’s facilities, and multipurpose community spaces incorporating a gallery for the Canmore Arts & Artisans Guild (CAAG), fitness centre, a performance stage and catering outlets.

“There’s lots of opportunity for a variety of activities to take place in the multi-purpose rooms in the facility, and it really brings everything together,” Casey says.

“The library is always busy, it’s arguably one of the busiest spots in Canmore, and to bring that together with some of our recreation facilities will create a really vibrant and interesting community hub.”

Aimed at catering to all, both seasonal and residential, the Canmore Multiplex may incorporate a great many different outlets, but they are all amalgamated with one central aim: Bringing the community together.

What makes the Canmore community?

According to Casey, 700 Railway Avenue has been kept aside by the town since the late 1980s, and planners have been waiting for that particular, ideal project to put in its place.

“At one time it was going to be the new civic town hall, that’s why the site was purchased. When the civic centre was built downtown we continued to hold onto it simply because we knew it was a gateway into the community,” he says.

“We wanted whatever structure that was built there to really be a feature for the town of Canmore. We wanted it to be functional on the one hand, but also iconic as well.”

Artist renderings of the future build are impressive, harnessing smart, modern design while retaining the subtle and matchless essence that is the Canmore prospect. Within this, Casey explains, modifications to blueprints have been made, and always mindfully of what it is that residents really require from the Multiplex.

“[It] was originally envisaged to have a new day care area, pool and library. Once the architects began trying to actually lay the structure out and make it work, it became obvious to them and to all of us that the day care was just too difficult to hone into the facility; it wasn’t going to work well for anyone,” he recalls.

“We pulled the day care out of the multiplex and too the budget allocated for it and transferred that to another site. We’ve worked with the Canadian Rockies school division and leased a piece of land from them, and we’re in the process of building a new approximate 8,800 square foot day care on that site.”

Now with two significant community-supporting infrastructure-expanding builds underway, Canmore is as thriving, admired and unique as it has ever been. Its year-on-year efforts to preserve that special something that characterizes the town to visitors and locals alike have been matched perfectly by its work with Albertan plans for smart building and development. The Canmore Multiplex is on schedule to open in the fall of 2012, and you can bet that the entire town will turn out to embrace this, its latest marker at the gateway into its treasured fold.