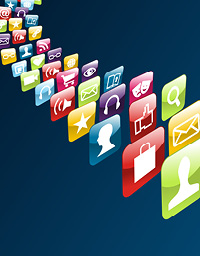 A revolutionary free mobile app for photo sharing is now available in the iTunes App Store thanks to a pair of innovative tech-marketing gurus originally from Edmonton named Ward Chandler and Kent Speakman.

Dubbed as “The Next Instagram” by Imedia, SeeMail adds something very personal to your photos – your voice. It’s the first photo app to add voice to photos using a patent-pending AudioT.ag technology. SeeMail moves mobile photo sharing to the next level by adding the emotion and feeling of the human voice to the photo sharing experience.

Chandler, who is the founder of SeeMail, brings 25 years of experience along with co-founder Kent Speakman, a recognized 15-year expert in social marketing management experience. Chandler was also the founder of Cashadvance.com and Optical Data Systems Inc. Speakman is a managing partner of ENGAGEIA, an interactive, incubation and intelligence agency working with startups and established brands. The business partnership between the two men has worked exceptionally well since Speakman first worked for Chandler as an account executive seven years ago.

“Kent has a strong background in social media and an excellent professional network in entertainment from his previous endeavours which made him a great fit for SeeMail,” Chandler tells us. “Social media integration is a very important aspect of the app and an important part of the business plan, so I wanted an expert for the team. Kent had worked on projects for my previous companies and made a great impression on me.”

Speakman has lived in Calgary for the past nine years, while Chandler splits his time between his home in Canmore, Alberta and Phoenix.

“I have dual citizenship and split my time between the U.S. and Canada,” says Chandler. “Lots of great tech companies start in a garage or an incubator – SeeMail started in an Airstream. My girlfriend Christine works with SeeMail as well so we really integrate our personal lives and our passion for travel and having fun with developing SeeMail. In my spare time I play and collect guitars and practice yoga.”

When CBJ talked with Speakman he was in Los Angeles developing partnerships with some major Hollywood celebrities that are starting to use the SeeMail platform.

Conjuring up such an innovative app that will become popular with the masses takes a lot of unique inspiration.

“To credit Ward, he had registered SeeMail.com in 1998 and the inspiration was the old photo you’d flip over and be able to read the story on the back,” Speakman remarks. “With mobile applications and photo sharing becoming so popular it just seemed like a great time to build something that was new in the market and would add that additional emotion of the human voice.”

Chandler and Speakman sat down with the entire team to brainstorm over several ideas, but it was SeeMail that rose to the top of the list as being the most exciting and so that’s the one they aggressively pursued and developed.

“There was nothing out there at the time that would allow you to put voice notes onto photographs and Instagram and all these other photo-sharing apps were becoming extremely popular,” Speakman says.

Consumers can readily see that a number of video apps have flooded the market in recent years, but sometimes it’s not the proper fit for certain scenarios.

“Video isn’t the perfect medium for sharing specific moments,” Speakman continues. “You wouldn’t take a video of your sandwich or what you’re having for dinner – and I’m sure you’ve seen on Facebook how many people like to share every meal and coffee that they’re having, so it’s that kind of in-between stage where you’re able to explain what’s going on but perfect that single moment in time with the photograph. And text isn’t always right and can be taken the wrong way. But with the voice you get the intended tone behind it.”

This new app also works tremendously well on the iPad as well as the iPhone. Later on this summer it’s expected the app will be compatible for Androids.

Chandler and Speakman are each committed to building SeeMail into the next social media powerhouse.

“What you see in the app now is just the beginning of what SeeMail will become,” Chandler promises. “We have some very exciting plans for SeeMail for brands, celebrities and other public figures.”

And there’s more to come after this project is complete assures Chandler.

“But only after SeeMail is fully deployed,” he says. “I have a collection of ideas I christened ‘The Billion-Dollar Scroll.’”

As for the revenue model, SeeMail monetization is primarily accomplished through upgrades to the basic service, which can be downloaded free from the app store. The basic service allows you to create an account and interact with three people on SeeMail. For 99 cents you are able to connect with nine people.

Another form of revenue generation is through the use of the patent-pending AudioT.ag technology that saves a voice recorded message or sound recording to inform others about the moment within the photo. The user can take a photo with the application or use one from their photo library. The app allows the user 33 seconds to record their message. A 100-character caption can also be added and the photo is published to the SeeMail user profile or Facebook.

While the exact number of app downloads is something the company is not releasing, Speakman says it has been downloaded by users in over 20 countries so it’s obvious their work has created a lot of buzz in a very short period of time.

For a slide show describing more of what SeeMail does, go to seemail.com/thestory.