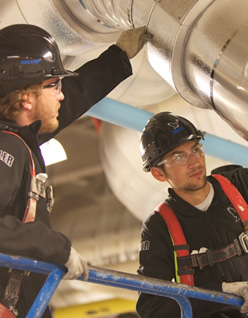 Adler Insulation & Firestopping are industry leaders who specialize in providing mechanical insulation, firestopping, and fireproofing solutions and services. Adler Firestopping received ULC Certification in Firestopping through the Qualified Firestop Contractor Program thus becoming one of the first companies in Canada to receive this type of certification.

Opening its doors in 1984, Adler Insulation & Firestopping have become major players in the Western Canadian markets, with offices in Edmonton, Calgary, and Saskatoon. Adler’s roots began in mechanical insulation. Through the progression and success of this venture the company was able to expand and create firestopping & fireproofing divisions.

Adler specializes in mechanical pipe insulation and structural fire protection. Providing cost saving energy solutions, safe work practices and reductions in carbon dioxide emissions is the kind of mechanical insulation service Adler strives to provide. The firestopping is designed to compartmentalize and provide sufficient fire prevention systems to minimize damage to structures and to minimize danger to the people within these structures.

Randy Perry, General Manager of Adler Firestopping, spoke with The Canadian Business Journal about the success of the company, its many exciting future projects, and the organization’s future operational plans.

Business was lean in 2008 and 2009. The damaging efforts of the recent recession were not lost in the construction world, a sector that witnessed some of the most difficult financial challenges. In the years leading up to the recession, Adler Insulation & Firestopping was involved in installing its firestopping services in new multi-family residential housing units in the area, but with heightened economic uncertainty, and the housing market beginning to stall, business “came to grinding halt.”

The dip and downtime allowed the company to refine its efforts, believing that a focus on exceptional customer service was key to endeavoring the difficult times. Perry commented, “The downturn forced us to solidify our services and to make sure that we’re continuing to be relevant to the marketplace, knowing what our customers want and standing by who we are. Joe Chinyavong, Marketing Director of Adler, believes building trust with clients is one of its keys to success. “We continue to receive feedback that our accurate numbers and scope coverage, meeting schedule requirements and compliant execution of our services are valued by our loyal customer base.”

“There has been a demand to add more services to what we already offer, so we added our fireproofing division. At the same time, we’re making sure that we don’t deviate too far from our core business and that we don’t stretch ourselves too thin. I once heard a product [service] for everyone is a product [service] for no one,” Chinyavong summarizes.

Unfortunately, contractors are being hired without any thought being given as to whether or not they are actually installing designed fire systems that are up to code. As a result, many low-cost operators thrive in the insulation & firestopping marketplace. There is a lack of regulation in the firestop industry due to misinformation and lack of clarity as to which regulatory authority is responsible for quality assurance. As qualified and compliant companies like Adler battle to make people aware of the dangers of improperly designed and installed fire protection systems, unqualified “fly by night” providers slip through the cracks and are hired, making dangerous and possibly even life threatening decisions on construction projects.

The most painful times of the recession now in the rearview mirror, Adler Insulation & Firestopping has seen much of its business return. In a price driven market the company hopes to see a shift to the client being partial to its value-added service.

“At this time, we are servicing Western Canada as well as the northern territories, so we service a lot of markets from all of our offices,” Perry summarized.

Engaging in projects across several sectors, including institutional, industrial, commercial, residential, healthcare, and governmental, Adler Insulation & Firestopping spoke about the projects it has been involved in over the years.

Most recently, the company highlighted its work with the expansion project taking place at the Edmonton International Airport; a challenging project that provided an aggressive schedule and logistical considerations with several projects across multiple areas.

“[The expansion project involved] dynamic installations with different applications, so you’re constantly pre-planning and revisiting,” Perry described. “We were very happy with the result and we have gained a lot of experience from that project.”

Adler Insulation & Firestopping has also been involved in several projects across the educational sector. At the University of Alberta, the company was involved in another large project, Edmonton Clinic South. The campus facility, scheduled to open this fall, is a student-focused facility that will house patient-centered clinical care, education, and research with the support of classroom, computing, teaching, and simulation laboratories.

“We’ve learned a lot and done well with these types of projects,” Perry said, adding that Adler Insulation & Firestopping have been involved in similar projects with the University of Alberta, such as the Mazankowski Alberta Heart Institute, the Health and Research Innovation Facility (HRIF), and the National Institute for Nanotechnologies.

Adler Insulation & Firestopping will also return to the University of Alberta in the near future to engage in a complex engineering project.

“The [Innovation Centre for Engineering] is promising for Adler’s future as we can augment our divisions by performing well on high profile jobs, such as, I.C.E.

It is very exciting to see our company presence on site in three distinct divisions (Insulation, Firestopping & Fireproofing). Adler looks forward to the opportunities and challenges to come,” Chinyavong said.

Additionally, at the University of Saskatchewan, Adler Insulation & Firestopping was involved in the International Vaccine Centre (“InterVac”) project. One of the largest Containment Level 3 facilities in North America, InterVac is one of few facilities in the world capable of working with humans and larger animals to prevent and fight infectious diseases. Currently, Adler Insulation & Firestopping are also working alongside the University of Lethbridge with several facility upgrading projects.

“I believe these projects can really provide value because of our attention to compliance and attention to detail,” Perry said, “making sure that firestop systems are installed properly and with efficiency.”