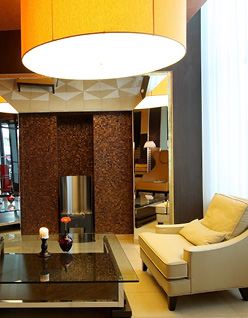 Suit and tie, slicked back hair, aggressive, and cut throat. It’s the archetypal profile of the businessman, perpetually reinforced in cinema and literature and, often, reality.

Then there is Betty Anne Latrace-Henderson, a sweet, prairie woman whose greatest talent, she says, is her ability to recognize people’s strengths, a talent that has taken her to the top tier of Canadian employers.

Latrace-Henderson is CEO of Airline Hotels and Resorts, a second-generation, family focused hospitality company based on Canadian hospitality and family values. Founded in the early 1970s by her late father Harold Latrace, the company is approaching 40 years in business. What started out as a single Travelodge has turned into a seven-property strong corporation with properties serving Alberta, Manitoba, Ontario, and Saskatchewan, including a Four Point by Sheraton in Edmonton, a Hilton Garden Inn in Saskatoon, and, recently, three Country Inns & Suites in Saskatoon, Regina, and Winnipeg.

Latrace-Henderson has worked with the company since the mid-1990s, officially taking over Airline Hotels and Resorts in 2000. It was under her watch that the company grew from a single property to a multi-property company that earned over $46 million in 2010.

In August, Latrace-Henderson announced the company’s acquisition of three Country Inns & Suites, part of the company’s growth strategy. Seen as a viable fit with the existing properties, Airline Hotels and Suites purchases properties that will best serve their primarily business-class clientele and its travel.

“These three new hotels complement our existing properties very well,” says Lana Doke, CEO of Airline Hotels. “We now have a presence in Regina, so we can better serve our guests who travel between Regina and Saskatoon. We already own Valhalla Inn in Thunder Bay. Adding the Country Inns & Suites in Winnipeg provides an option for our customers travelling between Thunder Bay and Winnipeg.”

As with any new home, Airline Hotels and Resort will do a spring cleaning, with renovations to the breakfast rooms, lobbies and rooms scheduled for completion by the end of 2013.

Renovations and strategic acquisitions notwithstanding, Airline Hotels and Resorts excels by putting care in the details. “Our service sets us apart,” says Latrace-Henderson. “Anyone can renovate a hotel room, do this or that, but the only thing that always sets you apart is a caring staff.”

Known as the “torch bearer” of the company’s values, Latrace-Henderson’s kinder, gentler approach to leadership has earned the company recognition amongst its peers and respect amongst its employees. Airline Hotels and Resorts was designated one of Saskatchewan’s Top Employers for 2011 by the Career Directory for employee and financial benefits such as year-end bonuses, tuition subsidies, a formal mentoring program and matching RSP contributions for all employees.

“They make the difference,” says Latrace-Henderson of her employees. “Five years ago, we made the goal to become one of the top employers in the country.

It means looking at and seeing the needs of our associates, and asking how can we help them.”

Asked about the company’s growth objective, Latrace-Henderson defines growth as more than new properties. “Growth is inevitable and it should be that way.

But growth can also be internal and developing better ways of doing and looking at things.”

Airline Hotels and Resorts is committed to providing an exemplary work environment, and has worked with The Pacific Institute, whose expertise in organizational transformation and strategic leadership is exemplified by Airline Hotel and Resorts’ visionary leadership and employee engagement.

Putting this philosophy into action has made Airline Hotels and Resorts one of Canada’s Top 50 Employers for Young People. According to the company literature, “We have an ambitious growth plan and we’re committed to investing in our existing hotels and associates. We offer many kinds of training: some of it is directly related to the job and some is personal growth. We think it’s our responsibility to help you become the best person you can be, so you can have your best life.”

“We have a wonderful benefits program here whether you are full- or part-time,” adds Latrace-Henderson. “When we were named one of the Top 20, it made us realize we are special. It also attracts new people to our industry. Now our turnover rate is getting lower because of these things, and that is really important.”

And what are Latrace-Henderson’s thoughts on winning the Ernst & Young Entrepreneur of the Year 2010 Prairies Region and Canada’s Top Female Entrepreneur for 2009? “I have wonderful people around me. I’m not one to be singled out, because it’s not about me; it’s about what everybody does.”