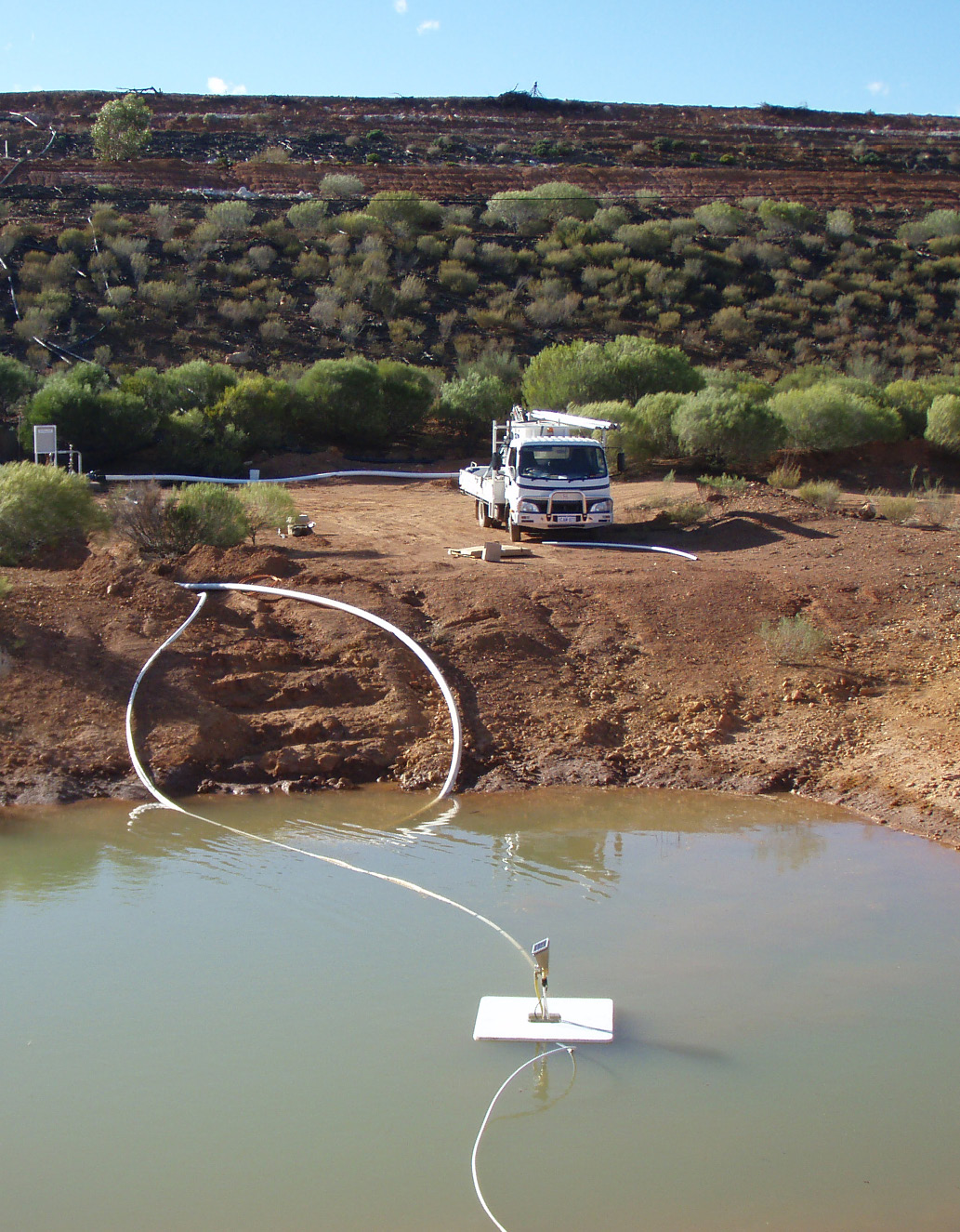 It was back in the early 1980s when then-farmer Alan Brown developed the unique direct air displacement pumping system that became the Airwell pump.

When first built, the invention revolutionized the way farmers obtained and pumped water to their stock or dams. Today, that innovative pumping technology – virtually unchanged in principle – is on the cusp of revolutionizing the de-liquefying of liquid-loaded gas wells in the oil & gas industry.

The company Brown created, Airwell Group Pty Ltd, has applied the Airwell technology to a diverse range of pumping applications over the past 30 years, in work contracts with some of Australia’s largest mining, environmental and industrial companies. Airwell pumps have been used for pollution recovery, corrosive fluid applications, salinity management, mine site dewatering and low flow rate applications.

Moving into the oil & gas sector several years ago necessitated the most significant adjustments ever made to the Airwell pump. “None of the adaptations we made previously were anything like as radical as the changes that oil & gas work necessitated,” says Brown.

Originally designed for pumping water in agricultural applications, the Airwell Pump can operate up to 15kilometres from power, is economical to run and safer and more reliable than more traditional water pumping methods. The first one was sold in 1984, the design patented in 1986 and the company Airwell Pumps Pty Ltd launched in 1988. In the 1990s, its innovative design gained it a niche market in the mining and industrial sectors, where it overcame pumping issues associated with pollution recovery, leachate recovery from tailings dams and open-cut pit-wall stabilization.

The pump uses a ‘Direct Air Displacement’ method to pump fluids, controlling the process with an electronic controller at the head of the bore. This cycles pressure to and from the pump in line with the full and empty signals received from it. The process is continuous until external influences stop it.

The Airwell Pump is able to handle high-grit and corrosive material, as well as flow rates ranging up to 0-100,000 litres per day. It can adjust to varying bore yields and self-regulate without damage to the pump or bore. It is Australian-made and has few moving parts, giving it long service life and high reliability.

Brown explains that the pump’s proficiency with low flow rates solves a significant problem in the oil & gas industry. “The pumps traditionally used for de-liquefying gas wells are very effective when there are large amounts of water involved; however, when the gas well reaches really low amounts of fluid, traditional pumping methods become problematic and unreliable because they’re not suited to low flow rates,” he says.

“Our pump, by virtue of the completely different way in which it operates, can actually pump down to no flow at all. It gets slower and slower until it stops because it’s run out of fluid, meaning it can’t be damaged by lack of fluid and is just as energy efficient in pumping little as it is pumping more.

“During the last six years, you could almost have called us a research and development company,” says Brown. “My son [Raymond] and I largely stepped out of our day-to-day Airwell Pumps activities and dedicated our time almost entirely to developing the oil & gas business. I have probably spent a total of four years living in Texas and Canada, doing the research.”

Airwell began experimenting in Kentucky initially, then opened an office in Texas. It attracted the attention of Canadian Husky Energy, who was interested in using Airwell’s technology to drain its many liquid-loaded wells. The two companies began trialling the initial oil & gas pumps together. All was going well until the markets threw a spanner in the works.

“The whole process came to a screeching halt when the North American gas price collapsed,” says Brown. “Husky was very reluctant to call off our Canadian trials when the gas price fell, but, when it finally reached its lowest price, they said, ‘sorry, we’ll just have to put the trials on hold’.”

Airwell Oil & Gas halted operations in the U.S. and Canada about 18 months ago now, but Brown reveals he’s been talking with Husky “almost every day” in the past few weeks, over which time the gas price has improved.

“We’re starting to get a lot of renewed interest from Canada and it’s likely that fairly soon we’ll be back up there doing some more trials,” he adds. “But because the gas price was bad for so long, I think companies are going to need to see gas prices exceeding $4 for quite some time before they’re brave enough to get back into it again.”

The Canadian market for Airwell’s technology is huge; according to Brown, the country has 210,000 liquid-loaded gas wells that need de-liquefying. He says there is also “massive potential in the low-producing strip of oil wells in North America,” but the marketing of new technology in this “very traditional” industry proved difficult in previous attempts.

While gas prices recover in Canada and the U.S., Airwell is focusing on the burgeoning oil & gas industry in Australia. “Australia is a latecomer to the shallow, land-based gas industry, however, it could potentially be a very big player if the operators can get their acts together and satisfy the environmental concerns and the local people,” says Brown. “The opportunity for us, with all the potential wells in Australia unequipped, is extremely good.”

The greatest potential in Australia right now probably lies in its emerging liquefied natural gas (LNG) industry, but it will be a while until those wells require pumps. So for the moment, Airwell is focusing on Australian coal seam gas projects. It is currently working in northern Queensland with a major coal mining company to extract methane from coal reserves before they are mined. This will reduce the methane gas released into the atmosphere through open-cut mining, thus minimizing the carbon tax the company has to pay. Collecting the methane gas rather than releasing it into the atmosphere is also better for the environment.

Looking ahead, Brown says Airwell will be concentrating strongly on Queensland – partly because it’s closer to home – with the intention to return to Canada in several months’ time as long as the gas price remains stable.

“We’ve also just been invited back to have another go at some shale wells north of Dallas, which will be deep trialling with a slightly different concept that’s even more experimental,” he says. “But we won’t be able to get to that in the timeline they were after.”

Airwell didn’t realize it at the time it made the decision but, in entering the oil & gas market, it may have bitten off more than it can chew. The industry is dominated by major players, among which family-based company Airwell sticks out like a sore thumb. “It just isn’t something that a small company could pretend to do long term,” remarks Brown.

“If Husky in Canada decided to equip even 10 per cent of its 32,000 wells, that’s millions of man hours of work and you just can’t build a business up that fast – it’s impossible and you wouldn’t want to try.”

In other words, the potential for Airwell’s technology to come into high demand – it is, after all, a unique patented process that fills a large niche in the oil & gas industry – could force Brown to strike a deal with a larger service company to take over the operation of the business. “If we wound up retaining a small percentage, or a directorship or whatever, that would do us fine. We would prefer to have small part of a business that lives up to its potential, than to try and grow it ourselves only to lose it in the end,” he explains.

“The day that one of the major oil companies places an order for a significant amount of gear – and we can almost see it happening now – the sector’s major suppliers will want to buy us out. Typically, big companies with power buy out small companies with ideas; that’s how the world works and there’s nothing wrong with that, it’s a natural cycle.”

The oil & gas market may be uncertain right now, but one thing’s clear: Airwell and its innovative pumps are headed for great things.