VIEW BROCHURE
An impressive past, a responsible future

The well-documented history of the resources industry in Alberta has been an incredible success story through the decades that has provided the very foundation for the province’s secure economic base and by extension has provided Canada with one of its most vital components to the gross domestic product.

Mining and the oil and gas extraction industry routinely accounts for a sizable percentage of Alberta’s annual GDP. On top of that are resources such as forestry and hydro-electricity and the energy industry alone provides substantial employment and economic benefits.

Among the notable Canadian and international resource industry organizations, ACR is unique in its focus upon Alberta, bringing together companies across sectors as well as creating space for communication and collaboration among the members and between resource companies and development stakeholders. The ACR communicates to enhance public awareness about the province’s diverse resources sector. It is essential that the industry is properly understood and the value proposition for the economic and societal benefits is made known.

At the ACR, the business approach considers the economic, social and environmental impacts of resource development. This process is accomplished through the cooperation and collaboration with a broad range of integral stakeholders. It’s always a matter of developing solutions to address obstacles and barriers that impede the full potential of the natural resources industry.

Resource extraction has improved the quality of life in the province and the ACR is fully committed to continuing the responsible development of resources in Alberta, to ensure a future as prosperous as our past.

As the organization evolved over time the members realized the potential of the resources in the province were more than just mining. There was also forestry, energy and the oil sands – as far back as the 1950s, the latter of which was then more of an interesting curiosity regarding its vast potential, although at the time there was not a way to determine how to unlock it.

The Canadian Business Journal recently spoke with Neil Shelly, Executive Director at the Alberta Chamber of Resources, which currently has about 180 corporate members.

The expansion of membership is in direct recognition of the fact that the sustainable development of the many diversified resources encapsulates more than just the owner company. By opening the door to a wider extent it allows for a more expansive level of collaboration and innovative ideas being brought to the table.

“We’re one of the few regions in the world that has an abundance of resources, and far more than is needed for consumption. Other jurisdictions would love to have that problem,” says Shelly.

Pipelines are one key transportation solution, but it goes beyond that into the realm of efficient rail operations and transit by road.

Shelly reveals that some of the other large organizations will often take the lead on advocacy and education on the pipelines with the ACR playing more of a supporting role. Otherwise it would result in merely the duplication of efforts that are already being handled effectively. Instead, the ACR focuses strongly on specialized committees, which are at the very heart and soul of what the organization is able to contribute to the overall success of the industry. The ACR committees tackle challenges and develop policies on everything from education to transportation, Indigenous participation to the future of resources. Their work, backed by white papers and strategic planning initiatives, assists in creating an environment where the resources sector can thrive.

“They are all member volunteers that sit on the committees and it’s always an excellent cross-section of people who get involved. I have been very impressed with is the spirit of cooperation,” remarks Shelly. “All the companies and their representatives push forward for the betterment of the resources sector as a whole and are able to leave their own corporate hats at the door.”

The Alberta Chamber of Resources is committed to making the province’s resources sector safer and more profitable, through innovative collaboration, best practice development, consensus development and other burgeoning strategies.

“Safety is always critical. We have a sister organization called the Construction Owners Association of Alberta where safety is one of their main mandates. We recognize that the safety of the workers is most important,” states Shelly.

Companies, contractors and leading engineering firms within the ACR came together and formed a group called the Dam Integrity Advisory Committee. Initially founded as a task force in 2014, in the immediate wake of two high-profile dam failures in Western Canada, DIAC is now a standing committee of the ACR Board. It immediately began to explore the issues of risk analysis and safety to come up with a standardized approach on how to develop and ensure the safety of tailings ponds near mining locations as well as hydro dams and similar type systems.

Built upon a foundation of cooperative effort the DIAC was able to produce guidelines and work with the Government of Alberta on advising as to the best way to implement new regulations. It’s been recognized nationally and internationally as leading-edge type of work.

“We regard that as a real success story, where a committee identified an issue and decided there must be a better way of doing things,” Shelly proudly says.

As a landlocked region Alberta is dependent on rail, roads and cargo ships when transferring goods to national and international destinations. The potential for growth is limitless but investment will be shortchanged if the issues of transport cannot be entirely resolved. One such project is the current wait-and-see scenario regarding the future of the Trans-Mountain pipeline. Also of concern is Bill C69, now being pushed ahead by the federal government.

“People don’t believe that the regulations are tight enough in defining the processes and how they will be evaluated. It’s not just economic reasons but also societal and environmental reasons. One thing investors hate, it is uncertainty. We’ve seen both national and international potential investors look at the process and say they want more assurances before they’d be willing to invest,” explains Shelly.

Numerous technical issues and vital strategic issues are being championed by the ACR, including how to make the regulatory system in Alberta more reliable and transparent.

“What I keep hearing more and more from our members is regarding how we can convey to the people of Alberta and Canada about how important our resources are to the country and the economy,” notes Shelly.

It can be frustrating for those in the industry to hear talk about an evolving and innovative business future but one that, more often than not, does not include the resources sector as being an integral part of the future economy. Perhaps it’s merely an oversight, but certainly an issue that the ACR and like-minded organizations do not take lightly. The future cannot all be about artificial intelligence – and in fact a substantial portion of it must continue to be real and quantified, which traditional industries bring to the table.

“As we move into the future we’re still going to need energy and basic building materials such as wood and materials for mining as well as hybrid and electric vehicles. All of that originates from the resources we have here in Canada,” says Shelly.

Many positives can be taken in terms of the overall forward progress being made within the resources industry. At the ACR an annual banquet is held in the early part of February awards are handed out in recognition of those who have done excellent work within the industry and provided a positive outcome that has served to enhance the advancement of sector. Two primary awards handed out are the Resource Leadership of the Year Award and the Indigenous Resource Leadership of the Year Award.

“It’s a way of celebrating people who have made a difference and positively moved the needle on sustainable development,” remarks Shelly.

Known predominantly for its oil and gas history, Alberta is comprised geographically as two-thirds forested green zone. Rapid growth was experienced in the late 1980s and early 1990s and continues to be a keystone resource and supporter for more than 35 communities in northern and central Alberta.

“Where the ACR can come together is by bringing together those involved in forestry and energy – we’re all operating on the same landscape. It’s about cooperatively sharing road systems and the timing of the developments in order to minimize the footprint to help preserve environmental and diversity values,” explains Shelly.

It is Shelly’s goal to provide a work environment that fosters cooperative and collaborative interaction with the provincial and federal governments along with industry players and stakeholders as a means of maximizing the potential of this crucial industry.

“I want to increase the awareness and understanding of the public in Alberta and Canada that the resources sector plays in society overall, and not just the economy but in terms of job creation. We’re the No.1 employer of Indigenous communities,” he concludes. “It is a future industry and will continue to be in high demand.” 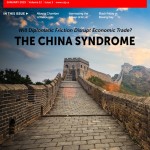