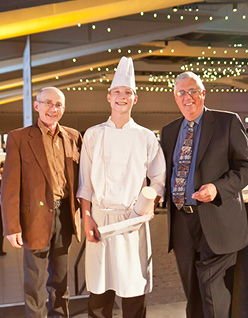 The Alberta Food Processors Association (AFPA) is a vital organization to the Alberta agri-food industry, representing, responding to and promoting the interests of its members in the food and beverage industry.

We wouldn’t be able to enjoy a hamburger made with Alberta beef, or bread made from grain, or any of the numerous wonderful foods that come out of Alberta’s rich agriculture industry without food processors, the people who add value to agricultural outputs.

The Alberta food processing industry is an $11 billion business, and a major purchaser of Alberta commodities such as beef, flour, edible oils and vegetables. Ted Johnston is President and CEO of AFPA, and works tirelessly on behalf of members who face regulations and other obstacles that make their work increasingly difficult to sustain.

“It starts with the dollar,” says Johnston. “The high dollar makes Canadian manufacturers uncompetitive. That’s a generalization, not 100 per cent — there are some who have been able to become more efficient and modernize — but generally the food processing industry in Canada requires a significant modernization effort to become automated to be able to function in the competitive world environment.”

Johnston says when the Canadian dollar was as high as 85 cents on the U.S. dollar, Canada was still competitive. “When you are at par [with the U.S. dollar] that makes life a lot more difficult.”

Extremely high energy prices in the province is another challenge the AFPA faces, which Johnston sees only increasing based on decisions by the Government of Alberta regarding the power grid. “The energy sector is proceeding to massively overbuild the power grid requirements of Alberta with those costs being passed on to the back of users in Bill-50. And since the food processing industry is a major user of electricity, this is going to affect us in a major way.”

In 2011, AFPA joined the Alberta Landowners Council in the fight to repeal Bill-50 — the power transmission grid bill. “If those lines are built as planned, at a cost of anything between $16 billion to $30 billion, the impact on your businesses could be catastrophic,” Johnston wrote in the spring issue of AFPA in Action.

“Transmission costs are a separate line on your bill and are not related to your rates. Industry is expected to pay 61 per cent of these exorbitant costs and your share could dramatically raise your energy bills.”

Also on the AFPA agenda is giving the Canadian consumer more opportunity to buy Canadian products, an effort that has been thwarted by an overly regulated guideline that says 98 per cent of a product must be from Canada in order to obtain the designation.

What many consumers don’t register is the near impossibility of achieving that 98 per cent, and the volume of products whose main ingredient are harvested and processed in Canada go unrecognized, presenting a major disservice for those trying to support domestic products.

“If you add a spice to a product, it would be more than two per cent of the ingredients, and if that spice was imported, that product does not qualify,” says Johnston.

The result is the label “Product of Canada” has been removed from almost all of the labels of manufactured food products in Canada for Canadian consumption, though the label is put back onto the product for export to the United States.

“This brings additional cost in an industry that fights very hard with margins that are very thin to begin with,” says Johnston. “And it does a disservice to the Canadian consumer because it does not properly identify Canadian products.”

The Department of Agriculture and Agrifood Canada have a Canadian brand group within the department looking for ways to help Canadian processors to identify their product as Canadian in other ways.

“The 98 per cent designation, we believe, is arbitrary on the basis of a theory that this is what consumers insist upon. I spend a lot of time with consumers and when I explain it to them I haven’t found one, not one, who doesn’t think the 85 per cent guideline would be quite suited to their needs. The Standing Policy Committee on Agriculture reviewed the policy thoroughly a couple of years ago and they determined the guidelines that would best suit the needs of Canadians would be 85 per cent of the product would be Canadian to quality.”

So far, the government has not made any changes to the Product of Canada designation, though the AFPA has not given up this fight.

The promotion of Canadian agriculture and agri-food products by the AFPA make it an invaluable resource for its members. AFPA continues to advocate on behalf of its members in matters that affect their livelihoods and the rights of consumers.