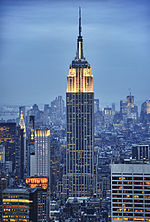 CBJ — After an exhaustive year-long search, Amazon has chosen New York City and Northern Virginia to co-anchor its second headquarters in addition to the original one in Seattle.

The company ran a year-long competition that drew tremendous interest from hundreds of U.S. and Canadian cities. Toronto was the only Canadian city to make it to the final round of 20, which also included the likes of Chicago, Miami, Denver and Indianapolis.

The search began in September 2017 when Amazon announced it would start accepting proposals for what quickly became known as HQ2, which the company has often touted as being able to create 50,000 high-paying jobs and effectively being a full equal to its original Seattle headquarters.
The company estimates that its investments in Seattle from 2010 to 2016 added $38 billion to the city’s economy.
Amazon has said employees who work in Seattle will have a chance to relocate. It will also hire teams and executives for the new locations.
@CanBizJournal
Recommended
CBJ May 2021 | Volume 14 | Issue 5