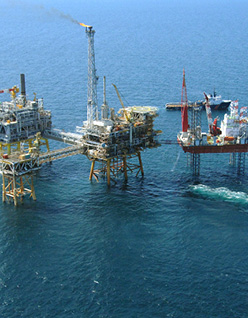 A symbol of success and progress

The study’s results show that there is more than almost three times the amount of oil previously assumed, at more than 3.3 trillion cubic metres of natural gas and 8 billion barrels of oil sitting offshore Nova Scotia.

Nova Scotia’s oil industry is about 250,000 kilometres with about 200 wells. (Compare this to 50,000 in the Gulf of Mexico).  Royalties from the industry are the third largest source of revenue to the province; for example, over the life of the project, the province expects to receive between $1.5 billion and $2 billion in royalties from the Sable oil field alone. Nova Scotia’s other main field, Deep Panuke is expected to start production within a few years, marking another significant economic annual injection from royalties.

That these operations run smoothly and effectively has a major impact on the economy of the province. Major oil and gas companies operate oil rigs and facilities that apply the most advanced engineering technology available; they are faced with enormous tasks that require tremendous support.

Such support comes in the form of Nova Scotia’s AMEC Black & McDonald, a joint venture between AMEC, one of the world’s leading engineering, project management and consultancy companies and Black & McDonald, an integrated, multi-trade contractor providing electrical, mechanical, utility and maintenance services to government, industrial, commercial and institutional markets.

“We provide engineering, procurement, construction management, maintenance support and operation support for oil and gas facilities. We have the complete range of engineering expertise from process engineering through to structural, mechanical, electrical and subsea,” says Mark Healy, President.

The joint venture also provides trade support for the majors, who then can focus on their primary objective and not divert their resources to recruitment. “We supply labour support with pipe fitters, electricians, millwrights etc. to do fabrication and installation of any modifications required to the offshore or onshore facilities operated by the client.

“We also provide core people who are part of the team that operate the facilities.  This involves operators on the control panels, people who work at truck and rail loading facilities at the onshore plants,” says Healy. “These people are our employees working as part of the ExxonMobil team of operations personnel.”
Primarily, AMEC Black & McDonald provides third party EPCM support for ExxonMobil with this work on Sable natural gas field off the Scotian shelf. Meanwhile, the Sable project, operated by ExxonMobil remains the dominant fixture of Nova Scotia’s offshore sector with all the facilities in Nova Scotia. The $3-billion operation involves six major natural gas fields and is a fixture in the province’s oil and gas industry.

Currently in Nova Scotia, Sable is the only operating field. And AMEC Black & McDonald are working front and centre as their ECPM (Engineering, Construction Procurement and Maintenance) contractor for ExxonMobil, signing a five-year contract in 2004 and again in 2009.

The other project in Nova Scotia is the $760-million Deep Panuke natural gas development, when eventually online, will be smaller than Nova Scotia’s existing Sable offshore energy project. Set to start production this year and operated by Single Buoy Moorings (SBM), AMEC Black & McDonald is the preferred company hired to be the Completions, Hookup and Commissioning Contractor of the new PFC on its way from the UAE.

AMEC Black & McDonald have over 1.5 million hours of work experience on Sable and are undoubtedly an established source for third party ECPM activity. They are highly sought after both domestically and internationally.

AMEC Black & McDonald is positioned well to contribute to the $5.5 billion a year Newfoundland oil and gas market. “The Hibernia field, Terra Nova and White Rose field, and the announcement of Hebron mean a significant amount of activity in that field that we obviously want to be a part of that. First gas for Hebron is anticipated for 2016.  We will be offering our EPCM services to support the Hebron field.”