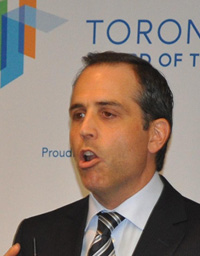 With origins dating back to 1850 in the United States, American Express has served as one of the most recognizable multinational financial services agencies throughout North America, providing services all around the world.

Three years after the launch south of the border, the Canadian arm of the company was set up in Hamilton in 1853.  There remains an office in the Steel City to this day, but national headquarters is based in Markham, just north of Toronto where about 3,000 people are employed.  The company’s call centre takes in about 11 million calls from cardholders each year.

AmEx Canada began operating as a registered bank and member of the Canada Deposit Insurance Corporation as of Canada Day 1990 following a decision by the federal Conservative government of Prime Minister Brian Mulroney about 18 months earlier.  The decision was not universally endorsed because federal banking policy at the time would not ordinarily have permitted American Express to operate as a bank in this country.

In today’s business world, successful financial services companies understand that strengthening brand strategy to increase customer loyalty is a key element to surviving in such a competitive marketplace.  Continuing on that theme is the role of service and the role of customer experience.

Howard Grosfield, President and CEO, American Express Canada, addressed those topics and others during a keynote address to business leaders and media at the Toronto Board of Trade.  He believes service and customer experience are not only the two most important levers available to companies today, but also the most overlooked.  As time goes by, they become more important than ever.

One of the factors that attracted Grosfield to his current executive post had to do with an interesting statistic.

“If you look back at the Fortune 100 companies that were on the list 50 years ago and you fast forward 50 years, only 20 per cent are still in existence today,” he reveals.  “I think there are many reasons why some companies endure for so long.  I can tell you that the focus on service and customer experience are two of the very important reasons why companies last so long.”

The first business for American Express 162 years ago was the stagecoach Pony Express delivery service of packages.  The two original founders of the company were Henry Wells and William Fargo, who went on to create Wells Fargo in California.  The world famous American Express Travellers Cheque was first introduced in 1891 and is still in existence to this day.

The next big phase for American Express came in 1915, when corporate travel offices began sprouting up around the globe, quickly becoming the largest travel agency in the world, a position it holds to this day.  AmEx is widely known for its financial services and particularly card, despite not getting into that line of business until 1958, some 105 years after the company’s start.

“The company has constantly evolved and changed and I would argue the company is on the verge of the next great evolution because I think in the payments industry we’re likely to go through more change in the next five years than we’ve probably experienced in the last 20,” Grosfield says.  “The business we’re in today is the exact same business we were in 162 years ago and that is the service business.”

Another caveat that enters the mix is the fact consumers have changed over the years, due to a shift in ideals and the rise of social media.

Every year AmEx Canada conducts a survey called the Global Customer Service Barometer, which is issued in 22 markets internationally.  The aim is for the company to get an accurate pulse on what card members are saying about companies and American Express around the world.

“The one concept every single year that comes through loud and clear no matter what market you operate in is that service is the key quality that continues to differentiate to make companies better than their competitors,” Grosfield states. “About 69 per cent of customers say they will spend more money with those companies that consistently deliver excellent service.” An addendum to the first part of the question was how much more would they spend, and the number was 12 per cent. In other words, even after the recession people are willing to spend 12 per cent more if it means stronger service.

Further to Grosfield’s revelation about service, an additional survey found that eight out of every 10 Canadians have decided never to do business again with a certain company due to poor service.

“The finding that I found most shocking was that despite the fact that customers will spend more for great service and eight out 10 will leave the company if there’s bad service, 42 per cent of companies don’t even have a proper mechanism to measure customer satisfaction,” he says.

“We also found in the survey that 64 per cent of unhappy customers will share their stories about a bad experience on average with 16 friends.  Thanks to companies like Facebook this is becoming unbelievably easy to do.  Those 16 are sharing it with 16 and so on.”

A positive aspect for Grosfield and his company with a strong commitment to service is that more than half of all customers will also relay their positive experiences with friends and colleagues.  Nonetheless, it’s still quite evident that people will go further out of their way to express bad experiences than good – so it behooves a company to heed that morsel of information.

Companies such as Facebook, Twitter, LinkedIn, YouTube, Google+ and MySpace have made the sharing of information much faster, which has a direct impact and profound implications on branding – both good and bad – no matter what company you are employed with. It’s instantaneous sharing of information en masse so it can be a great ally or your worst nightmare.

“There’s this social media revolution going on and this revolution is what I like to call an extremely efficient, well-oiled engine that enables every customer to become a blogger, trip advisor, journalist, critic, publisher or simply let the world know whether they like or dislike the service your company provides.”

Many factors help to feed this social media phenomenon, but when it comes to companies doing business, it’s hard to imagine two more critical components than service and experience.

“Unlike the days of water cooler chatter, it’s permanent and forever written,” Grosfield says.  “This whole new concept of the social media engine puts the old concept of word of mouth on steroids.”

Perhaps there’s no department within a company more affected by the advent of social media than the marketing department.  Gone are the days when marketers had complete control over the content and information released to the public.  In the past there was no mechanism in place for customers to respond directly with other customers, outlining their experience with a company’s products or brands.  Open dialogue is there – like it or not.  It’s essential for companies to adapt and accept this change and begin communicating with customers in an authentic manner because the dialogue is happening, with or without you.  That being the case, it stands to reason it’s in the best interests for a company to ready and respond should criticisms arise.  Having fast, accurate answers is necessary to put out any fires that can erupt from anywhere and everywhere.

“I think there are many things you can do to feed and be a part of the social dialogue,” Grosfield contends.  “Obviously, having exciting and sexy products help or a sexy busy model or a good story or convinced that among the things that are important to participate in this dialogue – getting service and customer experience becomes paramount.”

“We recruit from a set of individuals who view service as a noble profession,” says Grosfield.  “So when hiring for our call centres, the last place we tend to look is from somebody who’s got call centre experience. We’ll hire from industries where they were concierges at great hotels, where you can tell when you talk to them they believe service is the most important and noble thing you can do when you wake up every day.  There’s a great quote that The Four Seasons always used about how they built their culture, which is ‘that we hire on attitude and then we train on skill.’”

The concept of handling customer experience for American Express began with a change in approach to corporate sponsorships.

“American Express always thought of sponsorships in the realm of we’ve got to get our brand and logo plastered over every last bit of venue or event that we’re sponsoring,” notes Grosfield. “The right signage, logo on the top, all the way around – and we’ve moved away, consciously, from that approach.  In fact in many cases what we’ve done is we’ve taken the dollars we typically earmarked to slap and put our brand and logo on events and reinvested those same dollars inside the event to create unique experiences.”

In other words, it’s not just selling someone a ticket to a concert as part of a payment setup, but rather creating an entire experience – such as bypassing the line when you reach the venue and perhaps the ability to get VIP status and maybe even engage in a Q&A with the performer and/or promoter either before or after the show.

“At the end of the day when you look at this boring, mundane piece of plastic what we’re trying to do as a company is to see how we can turn what is largely about a payment transaction into a backstage pass, a VIP lounge or line – we’re trying to think about how this is supposed to make you feel and how it can put you in a position of willing to promote the experience or service you have with American Express.”

Grosfield makes it abundantly clear that service and customer experience are at the core of business success.