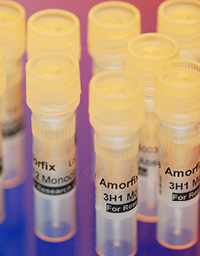 Mississauga, Ontario-based Amorfix Life Sciences has announced that is developing a new diagnostic test that is able to measure clumped protein fragments, called aggregated beta amyloid, in human cerebral spinal fluid which may indicate the presence of Alzheimer’s disease, making it easier to accurately diagnose.

Amorfix Life Sciences is a product development company focused on diagnostics and therapeutics for misfolded protein diseases including Alzheimer’s disease, cancers and ALS. The company is forging new ground in the ability to develop diagnostics using unique regions, or Disease Specific Epitopes, which, once identified, can be targeted in the pursuit of treatment and therapeutics.

Currently, the only definitive diagnosis for Alzheimer’s is a post-mortem examination of brain tissue to identify the presence of the proteins that lead to plaque formation around neurons in the brain, believed to cause the symptoms of the disease. The Amorfix test is conducted on the cerebral spinal fluid from living patients, representing a significant step forward in early detection and subsequent treatment of the disease.

“The breakthrough was we measure levels of aggregated beta amyloid on the cerebral spinal fluid on patients who were diagnosed with Alzheimer’s and compared those levels to levels from aged matched control subjects who did not have Alzheimer’s disease and found that there was a difference,” says Dr. Robert Gundel, Amorfix President and CEO.

“The importance of our work and its real significant is the measurement of the aggregated beta amyloid, which leads to plaque formation in the brain,” says Gundel. “The aggregated beta amyloid protein is what is toxic to the neurons, and the current theory is that it’s the build-up of the plaque that does damage on the neurons which then leads to the symptoms of Alzheimer’s.”

“Our hope is to one day be able to use this test on patients showing early signs of dementia in order to predict which patients may progress rapidly into the disease and which may not.”

Amorfix’s current efforts are to optimize the assay conditions to improve the sensitivity and specificity to minimize false positives or negatives within the 90 per cent range. “The first application of the test will be in the area of research, where it could be used to more effectively screen patients who participate in clinical trials. The current methodology to test for Alzheimer’s includes cognitive testing of memory and can have as much as a 30 to 35 per cent false positive result,” says Gundel.

“That means clinicians are potentially enrolling a significant number of subjects in their studies who don’t really have the disease they are trying to treat and that makes it very difficult to determine how well your drug is working,” he said. “An accurate diagnostic test like the one we’re developing can dramatically facilitate research and development efforts and hopefully get new treatments out on the market sooner at a lower cost.”

Amorfix believes this is significant for two reasons. One is it would help people in the pharmaceutical industry identify people who have the disease and then enrol those patients into studies for the development of new therapeutics. “The immediate value of our test will be to facilitate better research in the development of new therapeutics to treat Alzheimer’s,” says Gundel.

“Secondly, the earlier you can specifically diagnose any type of disease, the better change you have of effectively treating it,” he continues. “The same is the case for Alzheimer’s, even though there is no end-all treatment yet. We hope that our diagnostic can be used to specifically diagnose patients [with Alzheimer’s] and facilitate early treatment of those patients.”

Amorfix plans on offering its research through contract research organizations or specifically through pharmaceutical companies and academics that are conducting studies. “We will offer this as a test to help them select patients that come into their study,” says Gundel.

Alzheimer’s disease currently affects more than five million people across North America and that number is expected to grow as the population of baby boomers ages. The breakthrough by Amorfix represents an important milestone in furthering the early detection and subsequent treatment of the disease. The company is also working on a project to take the same biochemical test and adapt it to measure the same substance in a patient’s blood.