VIEW BROCHURE
Expanding Upon an Impressive Portfolio in Eastern Canada

It’s been a very busy and productive time for Anaconda Mining since we last spoke with the company’s President and CEO Dustin Angelo two years ago. The Canadian Business Journal recently caught up with Angelo at his Toronto office to discuss the notable new acquisition of Orex Exploration, which held the much-talked about Goldboro Project in Nova Scotia. The announcement of the acquisition was made just a few months ago and it’s already creating a great deal of excitement and stands to elevate the junior mining company to an entirely new and more prodigious level.

Prior to the acquisition of Goldboro, Anaconda’s flagship property and primary focus has been on the Point Rousse Project and its 6,300 hectares of property on the Ming’s Bight Peninsula located in the Baie Verte Mining District in Newfoundland. Since 2012, Anaconda has increased its property control by ten-fold with gold production reaching 16,000 ounces per year. In an effort to expand production, it is currently exploring three primary, prospective gold trends, which have about 20km of total strike length and contains five deposits and numerous prospects and showings, all within an 8km radius of its Pine Cove Mill. Anaconda also controls the Viking Project, which has about 6,225 hectares of property in White Bay, Newfoundland, 100km from the Pine Cove Mill by water and about 180km by road.

But it is the aforementioned Goldboro Project in Guysborough County, Nova Scotia that is garnering most of the headlines now and with good reason. Located 185km northeast of Halifax, the property is on tidewater and comprises 37 contiguous claims covering 600 hectares. Making it even more attractive is the significant amount of infrastructure that is already in place.

“What we especially like about it is that it’s a very large deposit with more than 800,000 ounces of gold and all high-grade – just over 5 grams per tonne. It’s a significant resource and pretty high grade, especially relative to what we’ve been mining at the Point Rousse Project for the last several years where we’ve been historically mining, on average, about 1.5 to 2 grams per tonne,” says Angelo.

The executive team at Anaconda Mining believe there is a genuine opportunity to expand the resource beyond its current parameters with about 1.5km of available strike length and having gone down about 250 metres on average and as much as 350 metres. At this juncture there is no geological rationale as to why the ore body would stop at that point, thus leaving plenty of room for optimism of even more growth in the deposit at greater depths. The company had been seeking an acquisition in Atlantic Canada for the past 2 ½ years and it appears that the patience has paid off.

“The deal came together rather quickly behind the scenes. We began discussions in December and signed a definitive agreement by early March and then closed it by mid-May,” reveals Angelo.

As the President and CEO, one of Angelo’s primary roles is to ensure the company always has the sufficient funds to continue to operate. “We’ve been fortunate over the last several years in that the Point Rousse Project has been able to generate positive cash flow so we haven’t been in the situation where we’ve needed capital from the capital markets to sustain ongoing operations. We’ve only needed capital for growth objectives,” he adds.

In fact, over the past six years Anaconda Mining has raised just $2 million in the equity capital markets and that came last summer when the business did a $2 million flow through. Anaconda has been able to fund itself internally but now with Goldboro looking to be a key contributor in the company’s future plans, it will certainly require more appreciable capital than the Point Rousse Project can generate. For that reason, Angelo will be focused primarily on telling the story and meeting with potential investors who may be interested in partnering with Anaconda in an effort to help expedite the project to its full potential. It’s anticipated Goldboro will be in full production by 2020 once all the required licencing and permitting processes have been completed. The process of advancing the Project will include engagement proceedings with local communities, including First Nations.

“We are trying to move towards more of a production profile yet have a larger resource profile as well through Goldboro where we think we’ve got the ability to expand the deposit and attract investors,” says Angelo. “Right now we’re doing about 16,000 ounces a year and with Goldboro we’re looking to be more in the 50,000-ounce per year production level.”

As of last September Anaconda Mining managed to source out another alternative revenue stream by coming to an agreement to sell its waste rock out of the Pine Cove pit that has been mined for the past seven years. The waste rock is being sold to a project in Charleston, South Carolina, which is using it in basic rock felt. It’s expected that about one-third of the 10 million tonnes of waste rock produced over the lifetime of the mine will be diverted to the U.S. destination.

“We own the rock because it’s on our property so we’re getting 60 cents a tonne as part of the deal. “It’s generating revenue and it is helping to create more jobs.”

As part of the initiative to divert its waste materials, Anaconda Mining teamed up with three other companies to build a port. There is no legal agreement in terms of a partnership but a connection was made through a daisy chain of contracts. The contract crusher on the project developed a site just west of Anaconda’s pit and the waste rock is shipped out from the port, which Anaconda controls. “It’s environmentally friendly because it’s removing waste rock and we’re decreasing our environment footprint,” notes Angelo.

The success of Anaconda Mining is thanks to the skilled dedication of the employees, who Angelo describes as being the backbone of the company. “It’s because of them that we are where we are. We’ve got a great senior management team that I would put up against any team in the industry. We have experience at all stages of mining. Our employees are phenomenal.”

As a collective group Anaconda Mining generously donated $50,000 to Hope Air and also sponsored a gala in St. John’s. Hope Air is a charity that provides free flights to people in need of medical care who live in rural areas but need to be transported to an urban facility. The company also donated to the Baie Verte area swimming pool and provided $10,000 for swimming lessons. It was so successful that Angelo and his team decided to make a five-year commitment while adding another $15,000 for repairs and upgrades to the swimming pool.

The well-known Battle of Beaumont-Hamel celebrated its 100th anniversary last year and Anaconda Mining donated its gold for the celebratory pins called ‘We Remember’. In conjunction with other companies that were involved the pins were sold and a sum of about $45,000 was raised with the proceeds being donated the Veterans Association in Newfoundland.

“We also donated the gold for 200th anniversary of the Royal St. John’s Regatta, which will be held next year,” adds Angelo.

The company is expecting significant growth over the next three to five years and a lot of that would obviously. Anaconda Mining will have a large tailings facility once the Pine Cove pit is mined out and of course there is the added benefit of the port facility, which will greatly aid in leveraging the infrastructure as the business grows within Atlantic Canada. By the year 2020 Angelo would like to be at a run rate of 50,000 ounces a year and then with a path in place to get to 100,000 ounces per year in production.

“We’d like to have done one or two more acquisitions by then as a means of building upon our resource portfolio to a level that would be above 2 million ounces and also expand some of the current projects,” he says. “We want to be seen as a larger player in the Atlantic Canada region in gold mining space.” 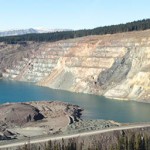