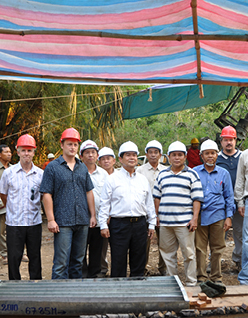 As multinational miners continue to wake up to the Kingdom of Cambodia’s enormous project potential, Angkor Gold Corporation is demonstrating a remarkable commitment to country development and advancing its large landholding of potentially company-making gold discoveries.

These are words to underestimate at your peril, particularly as gold prices soared in 2011 and historically less-developed mineral provinces grow ever visible, and with respect to country plays housing extensive deposits, few are more keenly anticipated than Cambodia.

Our search for a group to epitomise ‘greater responsibility’ took CBJ to Canadian gold junior and early-moving Cambodian explorer Angkor Gold Corporation (TSX.V – ANK) (“Angkor”); the company in possession of seven mining tenements in the north-eastern part of the country—approximately five per cent of the nation’s mining concessions—whose foundations incorporate positive community-level impact as a high priority.

“We report responsibly, continue to explore and build value for the people in the communities where we work. The government recognises that and some of our MOUs stem from companies that didn’t undertake actual exploration activities; instead they just sat on the licenses,” Chief Executive Officer Mike Weeks agrees.

“Cambodia’s opportunity extends beyond an exploration play. It offers a huge opening, making it a country play for organisations that operate properly—for groups that do things right.”

Angkor is firmly focused on proving up its gold resources, and having completed five years’ worth of exploration in 24 months—with consolidated maiden NI 43-101 reports on four licenses, drill ready targets over several dozen prospects (and more under assembly for this field season) and Phase One of its 2012 three-phase multi-prospect drill programme well underway—potential for defining a company-maker is certainly implied. In fact, management’s belief in its ground is so great that it funded exploration itself as a private company, and expects that the Angkor shares its executives continue to buy on the public market will prove highly valuable when works culminate in a large proven resource.

Likening Cambodia to the emergence of mammoth gold deposits in Colombia—where many companies are now kicking themselves for not picking up prime ground when they had the chance—Weeks says that Angkor first ventured into the country by way of a joint venture agreement with Liberty Mining International Pty Ltd. for the Banlung North, Banlung South, Oyadao North and Oyadao South mining licenses in October 2009.

In April 2010, Angkor raised its interest in the 1,167 square kilometres of licenses to 51 per cent, later acquiring up to 90 per cent that September and inking an option to purchase the last 10 per cent in April 2011—three months after picking up its three MOUs (Memorandum of Understanding) with the Cambodian Ministry of Mines in January 2011, which added another 1,499 square kilometres to its landholding.

“It’s a country play, not just one area, and we’re working to that philosophy. On the Oyadao license alone we have four or five really exciting prospects,” Weeks adds.

Border, Border North, Border Central and Border South within Oyadao North, Ratanakiri province, have been the main subjects of Angkor’s December 2011 drilling. Border is the most advanced prospect on the Oyadao license—one of five within the property that may house potential vein and lode systems—and results to date include 5.4 metres at 7.4 grams per tonne (“g/t”) gold including a two metre interval at 17.01 g/t and five metres at 5.9 g/t including one metre at 14.30 g/t.

“The more work we do in the area, the more we uncover,” Donahue says.

“The story now is the drilling in Border North which is 600 metres away from the Border Central prospect and less than a kilometre from our newly discovered soil geochemistry anomaly.”

Angkor’s efforts in extending its soil geochemistry grid around the Border Central and Border North prospects have been duly rewarded. A very large copper anomaly extending 400 by 600 metres is similar to the porphyry system the company is exploring in its Banlung tenement, Okalla prospect.  A pilot surface EM survey is planned to test the geochemistry anomaly in mid-January.  A further five by 100 metre holes will test this target by April 2012, Donahue says, and the team plans to develop and prove out this target during the months to come, as well as to further explore a number of other locations which indicate very positive potential within the Oyadao licenses.

“And there’s the Dok Yong prospect which is well over seven square kilometres of diverse mineralised area south of Oyadao South, where we’re working on cutting grid lines for soil geochemistry followed by a 400 metre drill programme this season as well.”

With many more promising leads to follow, Angkor’s Oyadao license looks likely to command centre stage as assays from drill core and stream samples are posted throughout the year.

At its 90 per cent owned Banlung and Banlung North licenses, home to the Okalla, Katieng and Kunmum prospects, Angkor’s ceaseless exploration schedule continues and Okalla leads activity. The 27 holes put into the prospect area to date, aimed at defining its structure, have outlined a 500 by 600 metre mineralised area which equates to approximately 90 million tons of minable deposit for every 100 metres drilled.

Highlights from this programme include 95 metres at 0.55 g/t gold including a one metre interval at 34 g/t, and two holes drilled down to the 300 metre mark reveal that mineralisation extends at depth.

Angkor’s EM geophysical programme aimed at enhancing drill targets is also well underway, and as CBJ goes to press, the team expects to move into next-phase February drilling within a matter of days.

It has been almost a year since Angkor and the Cambodian Ministry of Mines signed on the company’s three MOUs; a move underpinning its belief in Cambodia as a country play and reflecting the government’s approval for the way the land is being explored.

“They were attractive because satellite imagery indicated similar geology to our existing tenements,” Weeks says.

“And the results of our stream sediment survey on [our] Trapean Kraham MOU have just come in from ALS-Chemex laboratories in Laos, showing a strong gold anomaly in the east.”

As Angkor formulates its work programmes for Koan Nheak, Siem Panh and the Trapean Kraham tenement, Weeks says that in keeping with beliefs about Cambodia as a country play, further potential land acquisitions are up for discussion and ought to take shape in 2012.

“We continue to analyse additional acquisitions that are strategically advantageous to Angkor,” he says.

“And interest in Angkor and Cambodia is coming along,” Donahue adds.

“Our goal is still to be an exploration company and to work with a strategic group to develop what we prove up. We’ve already been approached by a few and while we have a bit more drilling to do ahead of that, there’s certainly interest.”

“From our perspective, they would have to have like-minded goals for the area.”

Since day one these goals have depended on exploring responsibly and demonstrating truly altruistic country and community commitment.

Cambodia is Open for Business

As a company wielding a lofty track record in social development globally, Angkor’s commitment to integrating its every move with exemplary community development programmes stands unrivalled. This team is about giving back and setting the standard for responsible exploration—not box ticking or being seen to perform accordingly, as Cambodia has endured in the past.  Building better value for and with the citizens in the areas Angkor works is simply viewed as part of doing business, and encompasses a variety of functions from providing water, medical and educational support around its tenements to personal community pledges in far flung locations oceans away from its exploration activities.

“We have four exploration camps underway at the moment, and we focus on those areas but we have a wider view as well,” Weeks says.

“We saw a need at a school in an area we’re likely to work in during the next year, and we initiated and assisted the school in building latrines and water facilities.”

On and around the exploration camps Angkor’s first focus is clean water, Weeks says. Secondly, the team concentrates on improving healthcare facilities and implementing programmes.

“We have a 40-foot container on route to deliver an ambulance and medical supplies from Canada that will be put to good use in the rural clinics and provincial hospital,” he continues.

“And finally, the most fun part is working on the education side with the children.”

An educational charge both surprising and resplendent of the company’s exploration record and commitment to country, is its plans to set up Cambodia’s first university degree programme in geology. This is the brainchild of Angkor’s exploration VP, Dr. Adrian Mann, and it is by no means a mere pipedream. The School of Geosciences, which is a technical college, was opened in November last year and the students are already in session.

“We’ve checked it out and worked with the UNDP; the first technical class from which around 38 people will graduate next year,” Weeks says.

“We’re hoping that the degree-granting program will be a reality for Cambodia’s universities in the future.”

Up-skilling the keen native population is also par for the course in Angkor’s day-to-day exploration work. Utilising local labour has been part of company efforts to implement sound practice infrastructure for future development, and Weeks describes the artisanal miners active across the company’s tenements as “the best explorers we have,” as he explains how their efforts in panning and digging manually for gold continue to provide initial indications of mineralisation for Angkor.

“They only touch the surface, and if a family of seven or eight can pick up a couple of ounces a month, given the average salary in these rural villages, that’s a huge return for them. They take what is visible which doesn’t hurt us,” he adds.

Angkor in Cambodia is a story of one of the world’s most exciting opening mineral provinces paired with precisely the right responsible group to develop resources for long-term country and company prosperity. The landholding amassed—and the many indications of abundant resources turned up by exploration to date—are a direct result of the way that this team does business.

Throughout 2012 from the Border prospect, Okalla prospect and its MOUs, Angkor has a lot of opportunities for significant gold discovery. And backed by solid exploration and an exemplary commitment to Cambodia ahead of its emergence as a country play, this is a gold junior well worth watching.