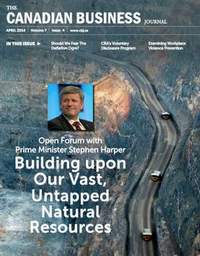 JUST WEEKS AFTER his shocking and untimely passing, it still seems somewhat surreal that Jim Flaherty is no longer with us. It’s a cavernous loss that strikes deep and hard to the very core of this country. I had the pleasure of meeting Mr. Flaherty on several occasions over the years in Toronto and Ottawa, and conducted an exclusive interview with him, which provided the basis for our cover feature in the Feb. 2012 issue of The Canadian Business Journal. A more dedicated, hardworking, thought provoking and personable man you will not find. St. James Cathedral in downtown Toronto was packed with mourners on Apr. 16, at the state funeral memorial service commemorating his life; citizens from all cultural and political walks of life: Conservatives, Liberals, NDP and others. For one day, all were able to put partisanship aside to honour and celebrate the person. It certainly says something when the Leader of the Official Opposition is left with tears in his eyes remembering what Flaherty did for this country.

SOON AFTER FLAHERTY’S announced retirement from federal Cabinet, Joe Oliver was installed as the new federal minister of finance. Prior to that he was of course minister of natural resources, and was again a noticeable presence this year at PDAC, along with Prime Minister Stephen Harper, who became the first sitting PM ever to attend the international mining and minerals convention in Toronto. Harper’s view on the natural resources sector headlines this month’s cover story.

AN INTERESTING READ in this month’s CBJ comes from economic expert Tina Kremmidas, who ponders whether we should fear the deflation ogre. What can an executive achieve in one minute? Joe Connelly has the answer. R. Brent Lang takes a sobering look at workplace violence prevention. This is a problem subject that needs to be met head on. We also hear from our regular columnists Mark Borkowski and Melonie Dodaro.

BY THE TIME THIS MONTH’S ISSUE of The Canadian Business Journal comes out each year, it’s usually a safe bet to assume that we’ll be seeing no further snow for the rest of the spring and summer… but I’m not making that bet this year. Let’s hope it’s gone for good, because I’ve already put away my skis, snowboard and other winter apparel. Now, where did I put my golf shoes?

POLITICAL FACTOID: The late Jim Flaherty is the only person to have ever served as minister of finance for both the province of Ontario and Canada. 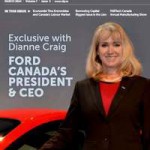 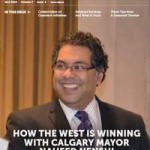