TORONTO, Jan. 18, 2023 (GLOBE NEWSWIRE) — Ascendant Resources Inc. (TSX: ASND) (OTCQB: ASDRF; FRA: 2D9) (“Ascendant” or the “Company”) announces that it has commenced its regional exploration program (as announced in its press release of November 29, 2022), designed to drill two highly prospective geophysical targets, Anomaly D and B, that appear analogous to the known geophysical footprint of the massive sulphides within the North Zone at its Lagoa Salgada property located on the Iberian Pyrite Belt (“IBP”) in Portugal.

On the IBP, as with most VMS districts around the world, VMS orebodies tend to occur in “clusters” as opposed to being single deposits. The Ascendant team have prioritized Anomaly D and B as having the potential to be additional clusters of mineralization at scale and with grade.

Drilling has commenced at the first target known as “Anomaly D” and has reached a depth of approximately 28m, drilling is expected to intersect the “core” of the target at the expected depth of 350-400m by early February 2023. Anomaly D is located 700m to the north-east of the South Zone at Lagoa Salgada and has estimated dimensions of approximately 500m of strike length and 600m of downdip length.

Anomaly D coincides with an elongated gravity anomaly that extends throughout the central part of the 7,209ha Lagoa Salgada property (see Figure 1.) and demonstrates an electromagnetic signature very similar to that of the North Zone. The Company believes this target may represent the folding of the same permissive horizon as the North Zone (See Figure 2). Anomaly D has been prioritized based on the confluence of the above factors and considering the North Zone at Venda Nova is the richest portion of the current resource with respect to: i) tonnage and grade, representing 12.8MT of the existing Resource; and ii) importantly, between 65-75% of the US$246.7m NPV8%, as outlined in the 43-101 PEA dated September 21, 2021.

Mark Brennan, Executive Chairman of Ascendant stated, “This is the first step-out program to target additional orebodies since Ascendant acquired the option on the Lagoa Salgada Project in 2018. We have always held the strong view that Lagoa Salgada is still in the “Discovery” stage and the North and South Zones are but two of numerous mineralised ore bodies and the true exploration potential at Lagoa remains untested and has the potential to be world class in scale. If Anomaly D is indeed a replica of the North Zone, the impact on the scale and value of the project would be truly transformational”.

Drilling on the second target, “Anomaly B”, a much larger yet deeper target (see below), is expected to commence later in the first quarter. 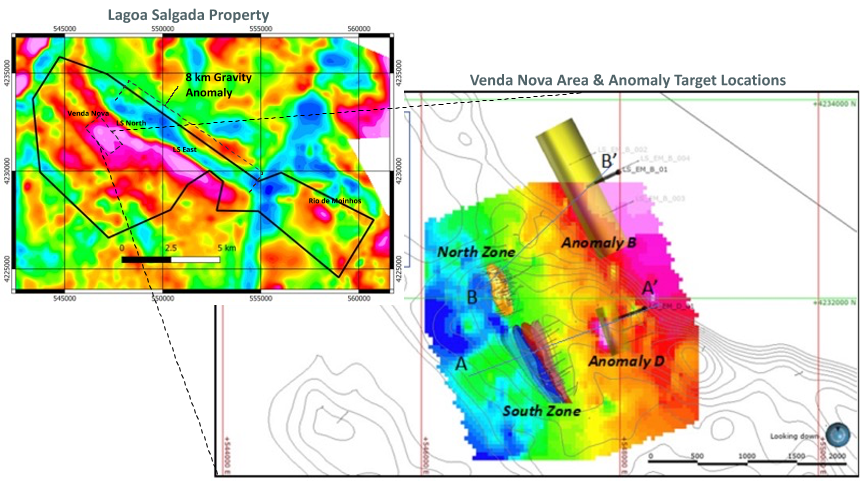 Anomaly D is located ~700m to the East of the Venda Nova South Zone.

The best fit (predicted vs actual electromagnetic response) of the Electromagnetic response was obtained modeling a maxwell plate with a 340 azimuth and an 80-degree dip (northeast), with dimensions of approximately 500m of strike length and 600m of downdip length. The top of the conductive plate sits just below the tertiary erosional contact zone at a depth of approximately 150m. Anomaly D notably coincides with the elongated gravity anomaly that extends throughout the central part of the property. This multi-kilometer anomaly was the original targeting tool for the discovery at Venda Nova. Ascendant believes that the shape of the anomaly, that shows some bulging to the northwest, might reflect folding. The inferred fold follows the main structure identified in the deposit defined by steep dipping flanks, with a general northwest trend and an axial plunge to the northwest. Under this assumed fold geometry, Anomaly D (east flank) might represent the same permissive stratigraphic horizon that hosts the massive sulphide lenses of the North and South zones (west flank).

Anomaly B is located ~1 kilometer to the northeast of the Venda Nova North Zone massive sulphide lens.

The best fit (predicted vs actual electromagnetic response) was obtained by using a thick plate that will be used as a general guide when defining the axis and the thickness of the conductor. The dimensions of the plate are: 1.3km strike length by 600m of down dip length. The depth of the top of the plate is approximately 200m. This conductive zone has the potential to host a single large or multiple smaller massive sulphide lenses. As is the case of Anomaly D, the first hole will target a central zone in order to define a more accurate understanding of the geometry, extent and general orientation in order to increase the accuracy of the following holes.

The scientific and technical information in this press release has been reviewed and approved by Sergio Gelcich, P.Geo., Vice President, Exploration for Ascendant Resources Ltd, who is a Qualified Person as defined in National Instrument 43-101.

Ascendant Resources is a Toronto-based mining company focused on the exploration and development of the highly prospective Lagoa Salgada VMS project located on the prolific Iberian Pyrite Belt in Portugal. Through focused exploration and aggressive development plans, the Company aims to unlock the inherent potential of the project, maximizing value creation for shareholders.

The Venda Nova North Zone deposit at Lagoa Salgada contains over 10.33 million tonnes of Measured and Indicated Resources @ 9.06 % ZnEq and 2.50 million tonnes of Inferred Resources @ 5.93 % ZnEq; and the South Zone contains 4.42 million tonnes of Indicated Resources @ 1.50 % CuEq and 10.83 million tonnes of Inferred resources @ 1.35 % CuEq. The deposit demonstrates typical mineralization characteristics of Iberian Pyrite Belt VMS deposits containing zinc, copper, lead, tin, silver and gold. Extensive exploration upside potential lies both near deposit and at prospective step-out targets across the large 7,209ha property concession. The project also demonstrates compelling economics with scalability for future resource growth in the results of the Preliminary Economic Assessment. Located just 80km from Lisbon, Lagoa Salgada is easily accessible by road and surrounded by exceptional Infrastructure. Ascendant holds a 50% interest in the Lagoa Salgada project through its position in Redcorp – Empreendimentos Mineiros, Lda, (“Redcorp”) and has an earn-in opportunity to increase its interest in the project to 80%. The Company’s interest in the Lagoa Salgada project offers a low-cost entry to a potentially significant exploration and development opportunity, already demonstrating its mineable scale.

The Company’s common shares are principally listed on the Toronto Stock Exchange under the symbol “ASND”. For more information on Ascendant, please visit our website at.

Additional information relating to the Company, including the Preliminary Economic Assessment referenced in this news release, is available on SEDAR at www.sedar.com.

This press release contains statements that constitute “forward-looking information” (collectively, “forward-looking statements”) within the meaning of the applicable Canadian securities legislation. All statements, other than statements of historical fact, are forward-looking statements and are based on expectations, estimates and projections as at the date of this news release. Any statement that discusses predictions, expectations, beliefs, plans, projections, objectives, assumptions, future events or performance (often but not always using phrases such as “expects”, or “does not expect”, “is expected”, “anticipates” or “does not anticipate”, “plans”, “budget”, “scheduled”, “forecasts”, “estimates”, “believes” or “intends” or variations of such words and phrases or stating that certain actions, events or results “may” or “could”, “would”, “might” or “will” be taken to occur or be achieved) are not statements of historical fact and may be forward-looking statements.

Photos accompanying this announcement are available at: