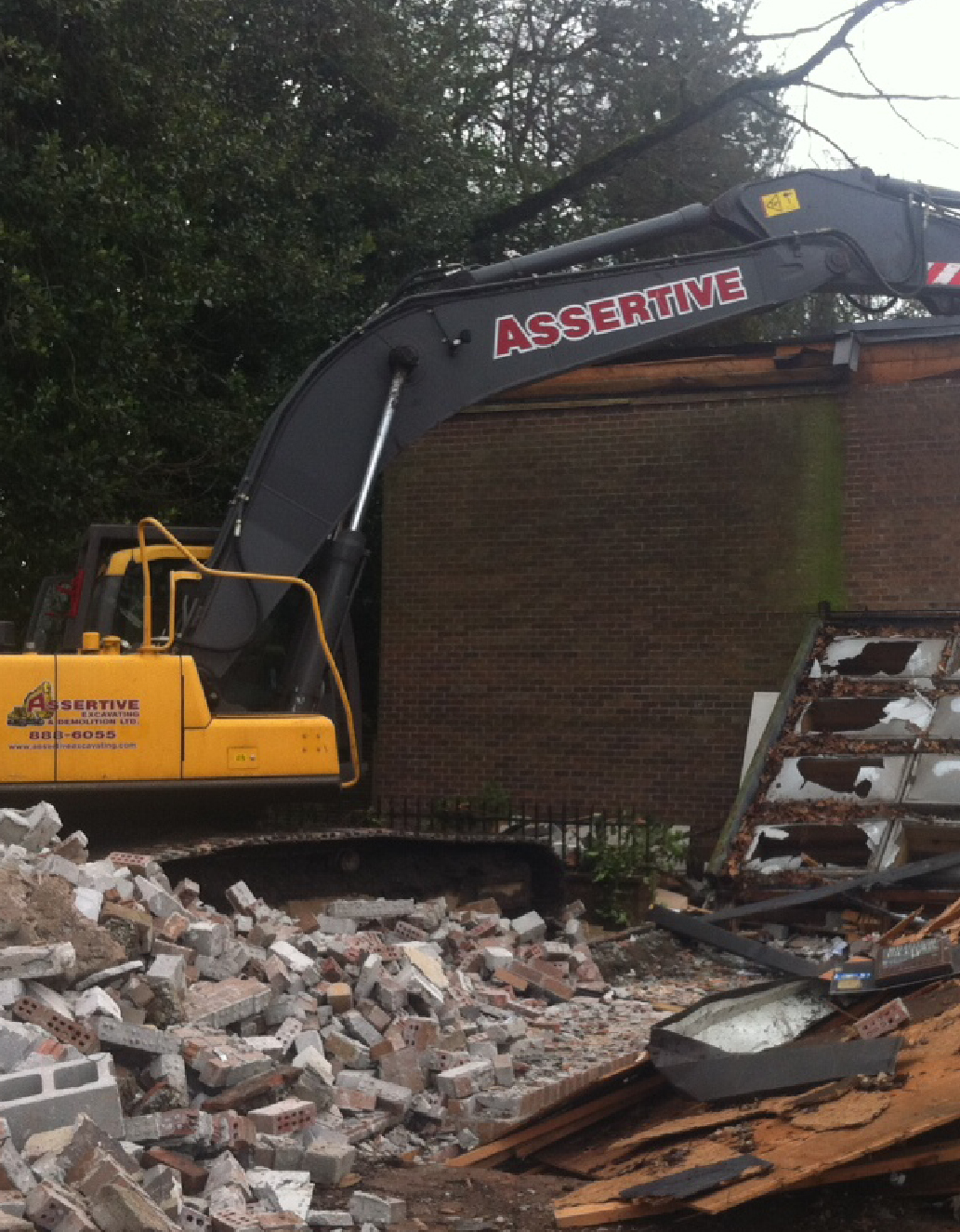 Mike Holloway started Assertive Excavating & Demolition after years of working in the construction and demolition industry. In 2003, Holloway decided that it was time for him to go in to business by himself, using a rented excavator “and not enough money for a cup of coffee,” puns Holloway, focusing on projects in Surrey and Lower Mainland, B.C.

Holloway set on the entrepreneurial path of determination and hard work, starting to build his industry connections, getting into his truck, driving to construction sites, and offering his professional services to site supervisors and managers. “I knew a few people and companies I worked for, some of which did not focus on excavation and building demolition as I do, so that gave me a bit of an edge at the time. I have some relationships in the industry and we still work together, but the bottom line is simply looking what’s happening around and in the city, and following up on any potential work out there, calling the phone numbers on the signs, and offering services,” says Holloway.

The company grew competitively, and today employs 20 staff, owns seven excavators and a half dozen big tractor trailer trucks. The company focuses exclusively on building demolition, and this business area faces its own set of challenges. “There is quite a bit of regulation and paperwork related to demolition, and we can’t simply show up and tear down the building. We have to be aware of the issues within the municipalities. For instance, the municipality and the City of Vancouver require engineered procedures for demolition for any building over three storeys high. This means that we have to provide a report describing how the building will be taken apart, what steps we will take to protect the neighbouring properties, and so on, even requiring an engineer’s overview and approval. The regulation has moved forward and we have to move with the times.

“During demolition we also have to take into account hazardous materials such as asbestos. While we don’t provide these services ourselves, we have an affiliate company so we offer the service as part of the package because it just makes sense,” says Holloway.

There is obviously more to demolition than knocking down a few walls, and the job requires a certain skill set and a level of expertise, explains Mike’s business partner, Rhonda Cox, that’s why Assertive insists on hiring people with senior experience of over five years to lead major and more complicated projects. The company also retains its own talent, and provides supervised demolition training. “We do take in greener guys but we them start off on more basic buildings, houses that don’t have close structures around them.”

The company also employs construction crew that strips the buildings and recycles what can be reused from the buildings. While the recycling is not mandatory in demolition, and it’s not most profitable, it creates jobs and work that wouldn’t otherwise be available. “We are quite proud of our recycling. We are not required to recycle, but we choose to do so. While recycling takes up man hours and time, the recycled materials do not end up in the landfill, for which we would get charged. It may not make us more money, but it’s socially responsible and people like it, and we can employ a few extra people. Having this expertise is also positive, because some of the municipalities require this service, so it’s a win-win all around,” says Holloway.

“As far as the actual recycling process goes, first we take out things that cannot be recycled [such as carpeting], and then we retrieve anything salvageable that can be sold or donated. We can recycle concrete, drywall, wood, metal, wiring … most building materials are recyclable. We send this material to another company for sorting and then the materials can be reused,” says Holloway.

Assertive Excavating’s main clients are building developers and municipalities. The company recently worked with the City of Langley, City of Abbotsford, and Metro Vancouver. With the booming construction industry in Vancouver and Lower Mainland, Assertive Excavating has more than enough business opportunities in the market. “The market has been great. We are doing a lot of work for developers and we have created some good relationships with the clients. There are a lot of townhouse and apartment projects underway. There is no more virgin land in Metro Vancouver, so anything that needs to be built will require some form of demolition first,” says Holloway.

Assertive Excavating just finished a demolition of a strip mall in the City of Langley, and the lot is prepared for future development. The company brought down two warehouses in Burnaby for a developer who plans to build high rises. In 2012, the company brought down most of a city block on Hastings Street in Vancouver, and the plan for a new high rise is already underway.

The company business is growing steadily with the West Coast construction market, and Holloway is contemplating additional service ideas, but is currently focused on the company’s core demolition business.