Mr. Rowland Howe, President of Atlas Salt, commented: “SLR is conducting a rigorous independent economic valuation of this exciting project and we eagerly anticipate a PEA in January followed by the Feasibility Study. As a homogeneous deposit, with similar DNA to Goderich in southern Ontario where I was mine manager for many years, salt cores at Great Atlantic are showing great consistency with some of the best cores I’ve seen in my 30-year career in the industry.”

Mr. Howe continued, “The shallowness of the Great Atlantic deposit is one of its most important distinguishing features. In a sector dominated by ageing mines, almost all of which are more than half a century old, Great Atlantic through the latest technology will be designed to operate like a highly efficient ‘Salt Factory’ serving eastern Canada and the U.S. eastern seaboard. The low-cost producer always has the edge. Given its many attributes Great Atlantic clearly has the potential to become the biggest and best underground salt mine in the world.”

Ongoing drilling is currently testing an area approximately 250 meters east of historic Atlas hole CC-4 that returned a gross thickness of 335 metres grading 96.8% salt starting only 190 metres downhole. Each widely-spaced drill hole in 2022 has encountered the thick salt bed at varying depths between approximately 250 meters and 335 metres within the depth profile of previous drilling. Current drilling will upgrade the classification of the Inferred salt resource in the area of the proposed mining.

Atlas has completed, through Gemtec Consulting Engineers and Scientists, baseline environmental studies of the Great Atlantic Salt area. The final report is forthcoming. These surveys provide current environmental data which will assist with the environmental permitting process for mine development. 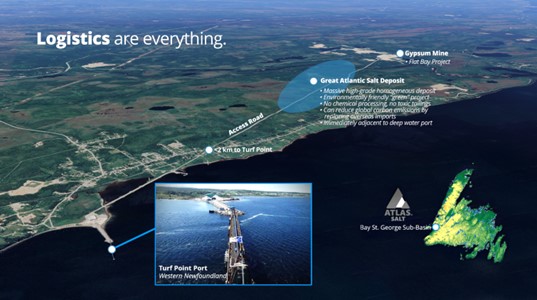 Patrick J. Laracy, P.Geo, and CEO, is the Qualified Person responsible for the technical contents of this news release as defined in National Instrument 43-101.

Bringing the Power of SALT to Investors: Atlas Salt owns 100% of the Great Atlantic salt deposit strategically located in western Newfoundland in the middle of the robust eastern North America road salt market. The project features a large homogeneous high-grade resource located immediately next to a deep-water port. Atlas is also the largest shareholder in Triple Point Resources as it pursues development of the Fischell’s Brook Salt Dome approximately 15 kilometers south of Great Atlantic in the heart of an emerging Clean Energy Hub.

Not for release in the United States or to U.S. newswire services

A photo accompanying this announcement is available at https://www.globenewswire.com/NewsRoom/AttachmentNg/9551b936-3dd1-44fd-bf1b-20ede2582fc4 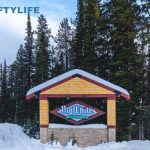