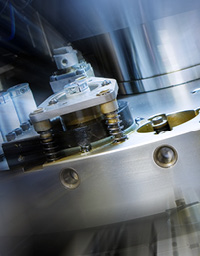 Bringing efficiency to the industry

A global manufacturer of specialized CNC (Computer Numeric Control) cutting tables, used across the industry for anything from plasma to lasers to robotic arms, AXYZ International’s business, quite simply, finds CNC solutions for its growing customer base.

Founded in 1990, AXYZ International today leads as a machinery service company, developing software and controllers in order to provide upgrading and retrofitting services to its clientele that has grown to cover an array of industries.

Today, that customer base begins with small sign shops or cabinet shops, which typically in a first purchase obtain a table saw, or a drill press, or a band saw, but a CNC will literally replace all these functions in one machine, in addition to the control and talent of its programmed software.

Machine sizes range from one metre by one metre, in many different sizes, an entry-level product for schools, side shops, small plastic fabrication shops, and pet projects, up to 3.5 metres by 15 metres, used, for example, to cut holes in the side walls of a motorhome.

The Canadian Business Journal spoke with Gary Harvey, President of AXYZ International, about the company’s unique competitive advantage, the many industries in which it is involved and, with that, the expansion of the company that has gone global in recent years.

Making AXYZ International competitive, viable and successful in the marketplace is its ingenuity to work its own developed motion controller, a second generation product that has evolved since its initiation in 1987. The product has a very high data bandwidth to handle all motions. According to Harvey, an AXYZ machine, such as a spindle, can hold a number of different tools, comparable to a hand application, except now it can move it three dimensions.

“We tend to still address what we call the finite changes in the ‘new normal’ of the manufacturing world, which is now looking to accomplish much cleaner and quicker projects,” said Harvey. “These will go to a CNC right away or they might need a finite customization [of the CNC], and that is where we set in. An example of that would be the sign industry where they have merged toward the screen and graphics industry, so they now have camera systems for vision, mounting cameras on machines.”

A multitude of industries

AXYZ International looks for industries seeking to increase productivity, as well as those looking for more consistent results on the business end. Those industries in which the company is involved include signs and imagery, furniture making, wood processing and, most significantly, a very large market in composite sheet processing. Another key to the company’s market is aluminum composite material (“glass that looks like metal”), used throughout the world to renew outdated buildings and infrastructure.

“There is always a big argument of whether by selling a machine do we reduce jobs or do we enhance jobs, and I tend to think that as the company grows, it is primarily about enhancing careers because there is a connection between advanced skills and computer with everyday manufacturing and production,” Harvey said.

“It drives for efficiency and redefines what people don’t do anymore that is considered maybe
a less efficient service.”

“From there we go into plastic fabrication, used for point of purchase displays…just about anything you want to do with a CNC can be accomplished because of the various generic programs that are out there. Most young career people are coming out of a school and they have a knowledge of products as simple as CorelDRAW, all the way up through AutoCAD, which produce capability output files for the CNC, so you don’t really need a lot to make a CNC dance.”

According to Harvey, had he been asked a few years back of the company’s goal, the answer would have been expansion. Today, the company has grown its reach with offices not only in Canada and the United States, but also the U.K., India, Poland, and Australia. Added Harvey, “With expansion you essentially bring on administration costs and a need for direction and drive all the time. With the economic crisis that just rolled through the world here, we still hold all of those same facilities, but we don’t aspire to build further than that.”

It is the belief of AXYZ International that today Canada is faced with the challenge of being a primary manufacturing source for the world, with its high levels of quality products and the ingenuity of its manufacturing and engineering.

Summarized Harvey, “We are somewhat connected to the market. We could use a lot more exposure to allow us to take a view into the other markets by trade missions or otherwise.” With such a grasp on its industries, the future of AXYZ International does indeed look bright.