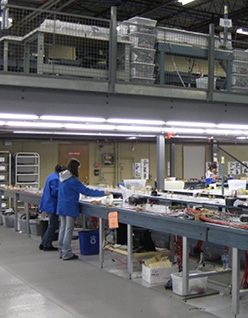 Resulting from a management buyout back in 2008, the cable, harnessing and electrical mechanical assembly manufacturer B3CG Interconnect has enjoyed continuous growth since it began trading under its unconventional name.

“The story of B3CG is one-of-a-kind,” says Marketing Vice-President Daniel Guinta. “We were five people working for a large company in its cable assembly division and we decided to pull together and stage a management buyout.

“We bought that division and named the new company B3CGa name constructed from the family names of its founding shareholders.” Along with Guinta’s name (the ‘G’ in B3CG), the company’s name is made up of three ‘B’s taken from its President Stéfan Baumans, Engineering and Business Development Vice-President Marc Brosseau and Finance Vice-President Céline Brunet. The singular ‘C’ derives from Operations Vice-President Michel Croteau.

“B3CG is a world class leader in contract manufacturing for cable, harnesses and electrical mechanical assembly,” Guinta states. “Our clients are design-led OEMs who need a manufacturing arm to build their products.

“We are specialists in some industries such as transport and we have customers who work in the rail, buses and emergency vehicles sectors. We are also very strong in the medical and industrial sectors.”

The company works on both sides of the U.S.-Canada border and has demonstrated its technicality for the U.S. market by assembling complex harnesses for state-of-the-art medical beds for one of its clients in the country.

Following the management buyout three years ago, the company has grown quickly to become one of the largest cable harness manufacturers in eastern Canada, undergoing expansion at both of its manufacturing facilities found on either side of the U.S.-Canada border.

“When we started the company it was generating yearly revenues of $15 million,” says Guinta. “It’s now closer to $25 million in Canada and $5 million from our U.S.-based operation.

“In its own way it’s a very nice story and we’ve been fortunate to have received a lot of support from our bank, as well as from the Business Development Bank of Canada who took us very seriously and saw that we had a very solid business plan.”

“We started our U.S. venture in 2009 and it’s growing,” remarks Guinta. “We have just hired a new sales director who will take care of the market in the U.S. northeast.

“We’re applying pressure to the accelerator in respect to our growth in the U.S. and our current aim is to develop that side of our operations to generate revenues of $15 million a year.

“From our Quebec plant we’re close to about $20 million to $23 million right now, but we want this to grow further to $35 million within three years,” he adds.

According to Guinta, one of the ways the company plans to meet its ambitious growth objectives is by targeting fewer smaller clients and attracting business from more medium-sized OEM clients.

“Managing 10 clients of $1 million is more work than having two customers of $5 million each,” explains Guinta. “One of our missions, however, is to become indispensible to our clients by providing them with real peace of mind, and proposing innovative outsourcing solutions.”

Standing apart from the competition

Guinta says that what really sets the company apart from its competitors is “quality with some added value”.

“We sit down at the table with our OEM customers and look at the assembly of their product with our eye for production from the standpoint of manufacturability,” he remarks. “We will bring the unit to the table and ask questions about its design and advise our customer on how to manufacture the product with the same quality, but at a lower cost.”

Guinta says that it is this hands-on approach and early involvement in the design stage that sets the company apart from its competitors. “What we’re asking our customers is, ‘Let’s sit down with you and let us look at the product’,” he explains. “We will bring value, because if you don’t bring your product to us at the table before it is approved by the regulatory body, it will cost you to go back and change the design.

“Let us look at it with our eye for manufacturing, because 80 per cent of the product’s cost is determined during the MPI cycleso it’s there that you need to make changes,” he adds.

Guinta says that B3CG’s hands-on approach and “culture of constant cost reduction” has been “really appreciated” by its customers. For its customers in the United States, as well as those Canadian companies looking to move into the U.S., the company’s facility in the state of New York is offering a solution for those targeting public-sector investments.

“We have two manufacturing plants on either side of the border; our strategy is to be able to provide product manufacturing solutions in Canada, as well as in the U.S. from our plant in Plattsburgh, N.Y.,” remarks Guinta. “There exists some constraints on Canadian manufacturers who wants to sell products in the U.S., especially if they are selling products to a town, city, or state authority, where they will be asked for some U.S. content due to the famous Buy American Act.

“In having a facility in New York state, we are able to help out some Canadian OEMs by providing them with flexibility as they no longer have to start over again with a place on the other side of the border,” he adds.

In just three short years from now the manufacturer is hoping to expand the size of its facility in New York state to 40,000 square feet from which it hopes to generate $20 million to $25 million in sales, while in Quebec continual growth is also planned with B3CG hoping to expand its Saint-Eustache facility growing to 55,000 square feet and generating about $35 million.

With such ambitious plans in place it is clearly important to have the infrastructure in place. With manufacturing facilities on either side of the U.S.-Canadian border, B3CG looks to be well placed to take advantage of the demand for specialised cables and harnesses from both markets.