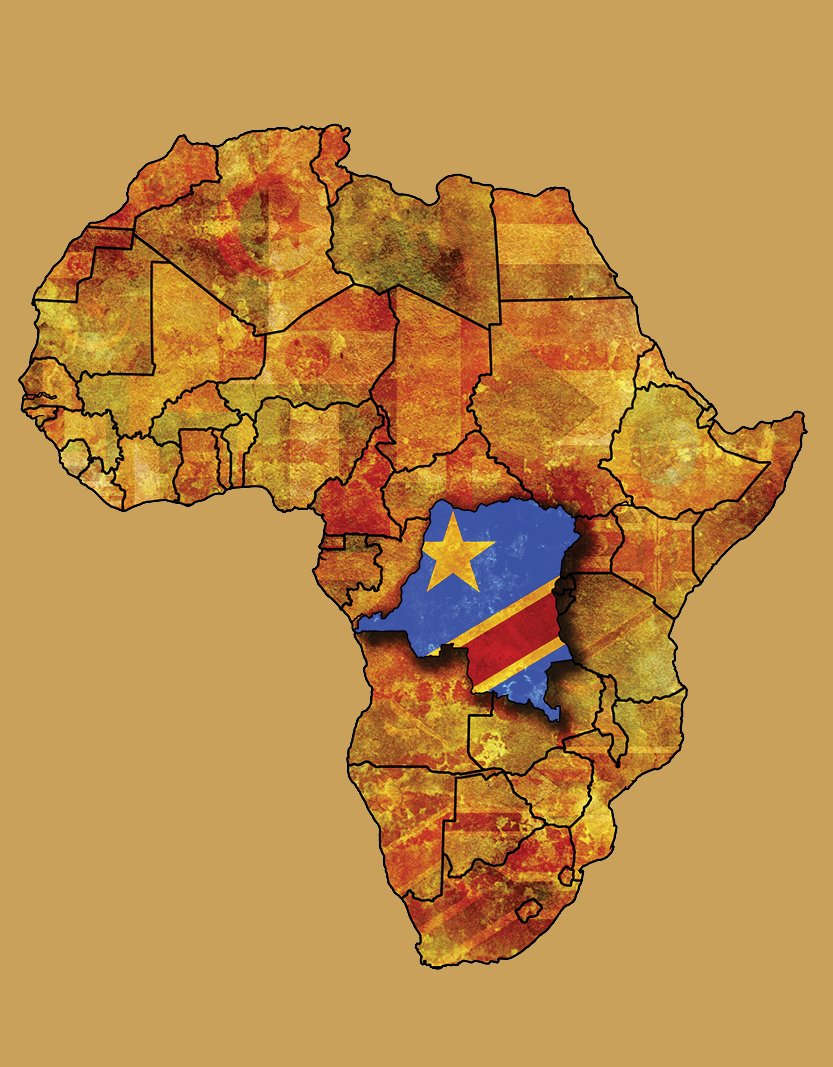 Risk mitigation and corporate social responsibility are two issues that run front and centre across many business sectors and perhaps no more so than in the resources industry, worldwide. Such is the case with Banro Corporation, a Canadian gold company with production from its first gold project, Twangiza, in the Democratic Republic of the Congo. Within the Banro Corporation it was decided the Banro Foundation would be established in order to help local citizens in the regions where it conducts business.

Banro is also focused on the development of its second open pit project Namoya and is undertaking exploration on two fully permitted and licensed projects, Kamituga and Lugushwa. All Banro’s current projects geographically sit along a 210 km stretch of the Twangiza-Namoya gold belt in the South Kivu and Maniema provinces of the DRC. The Twangiza oxide mine began production in October 2011. Projections for the first year were 120,000 oz. of gold.

A highlight of this past year has been the immense success of the Banro Foundation’s fundraising event, Celebrate the Congo, which was held in Toronto earlier this year. The celebration of Congolese art and music received outstanding financial support from Canadian and international companies active in the mining industry, with proceeds going toward construction of a new $165,000 hospital in the town of Salambila, Maniema Province, Construction began in September with completion expected in early 2013. The Salambila Hospital is Banro’s 2012 Commitment to Action as a member of President Bill Clinton’s foundation, the Clinton Global Initiative (CGI).

Martin Jones, Chairman of the Banro Foundation since 2007, was a keynote speaker at a Canada-Southern Africa Chamber of Business gathering to discuss his company’s mission in the Congo. He joined the company in 2004 as Vice President, Corporate Development, following a career as a consultant in corporate communications. He started off by making a bold predication for the future.

“Africa is going to play an increasingly significant role in global affairs over the next 50 years than it has in the past,” Jones says. “It’s increasingly a dynamic continent. Of the world’s 10 fastest growing national economies, six of them are African.”

The average age is under 20; in Canada it’s over 30, but part of that statistic is due in part to the fact the expected lifespan is lower in in many poor African nations, although there is tremendous wealth in certain regions. It’s a continent with about 1 billion people across a huge land mass. Into Africa fits the United States, China, India, Eastern Europe, much of Western Europe and Japan. It’s often forgotten – or perhaps not known at all – just how geographically enormous Africa happens to be.

The Democratic Republic of the Congo lies in the central part of the African continent and is roughly the geographic size of the United States, east of the Mississippi River with a population of about 72 million, making it the second largest country in Africa and the 11th largest in the world. French is the country’s official language. As a nation, DRC is best known internationally for the famous world boxing championship fight between Muhammad Ali and George Foreman in 1974 known as The Rumble in the Jungle when the country was known as Zaire. But that was nearly 40 years and a number of civil wars ago. Kinshasa, where that historic fight took place, is the capital city.

Banro’s exploration office is located on the eastern side of the DRC, closer to the border with Rwanda.

“We have a gold belt that begins about 45 km southwest of the Congo and extends about 210 km in total,” Jones reveals. He says he’s often asked about the fighting going on in the country with a number of political uprisings through the years.

“There was a war that began in 1998 and ended in 2002,” he relays. “Since then there have been legacy conflicts. What you don’t understand from reading newspaper accounts is that these are by and large limited, fairly secluded pockets.”

The M23 rebels are the faction receiving most of the attention these days. They are primarily concentrated in the Goma area. Late last month there was an escalation in the violence as the rebels seized Goma and a nearby international airport. The main concern now for humanitarian aid organizations is that some fighting on the front lines are children. Human Rights Watch, based out of the United States, accuses the M23 of using child soldiers, defined by the UN as anyone under the age of 18. International law identifies any person under that age who is being involuntarily used by an armed group, whether as a sex slave, cook, porter, spy or messenger, to be considered a child soldier.

“Further north you have problems with The Lords’ Resistance Army and to the south there’s some local Congolese militia but a vast part of the Congo really is by and large conflict free despite what you may read in the news.”

Despite all that unrest and upheaval, Jones insists it’s not as widespread as those of us on the outside are lead to believe.

“I can tell you our projects are certainly not compromised by what’s going on,” he affirms.

Banro Corporation is very easy to track. It’s involved in one nation – the Congo and one mineral – which is gold. Currently the company is involved in four major projects along a single gold belt.

“We’ve just brought our very first gold mine into production,” Jones continues. “It’s the first commercial gold mine built in the Congo in over 50 years. We entered full commercial production as of September.”

Banro is currently building a second mine, 210 km to the south and Jones says there is hope of producing roughly 250,000 oz. of gold per year.

One of the primary objectives for companies across many diverse business sectors is the necessary commitment to corporate social responsibility. It essentially boils down to corporate self regulation integrated into a particular enterprise model. CSR is designed to aid an organization’s mission as well as provide guidance as to what the company stands for and will uphold to its consumers through its presence in that region or territory.

“Corporate social responsibility at Banro encompasses many things,” Jones offers. “For example, the creation and capacity of building jobs and that’s very, very important. Our goal is that 95 per cent of skilled positions within Banro will be held by Congolese citizens. Right now it’s around 82 per cent.”
Banro employs about 2,000 Congolese through contract companies, both directly and indirectly.

“We’ve been very active in nurturing local and African supply chains,” Jones notes. “We have world-class standards in all aspects of mining based upon the International Finance Corporation Sustainability principles.

Jones says there are comprehensive CSR programs at the mining development site along with occupational health and safety and on-the-job training. Banro is also focused on longer-term community development, which is where the Banro Foundation takes the lead. It was created in 2005 as a registered charity in the DRC and is based upon a set of guiding principles that were put in place prior to exploration.

“We met with community leaders, church officials and government officials and asked what is it that Banro can do to make the greatest contribution to these communities,” Jones reflects. “They told us to focus on education, healthcare and community infrastructure development. Those are now our top three priorities plus we provide humanitarian assistance as required.”

Each of the four communities where Banro has exploration equipment, committees of leading citizens have been established to help advise on what projects to undertake and oversee the management of the construction projects as well as taking responsibility for the necessary maintenance afterwards. It’s all about local engagement and making community members feel like they are part of the process in work that’s being done in their own backyard.

“We do have a special guideline directly towards supporting opportunities for women,” Jones says. “We started off in 2005 with this type of project and still do a lot of this. There was an underwriting of an HIV awareness program for high school students and supporting this organization, which is the Don Boscoe Foundation, which rescues street children from the streets of Kinshasa with 2,000 children receiving care.”

Jones took over the foundation five years ago and it was clear to him that Banro needed to still do a lot more. Previously the foundation had been run by the company’s senior project geologists and they were just too busy to do justice to the needs. There are now nine people on the ground working with Jones, all Congolese with community offices in each of the seven cities where exploration is taking place. The locals said what they needed most was advancement of major infrastructure projects.

A second school was built several months later, with the ability to house 300 students.

“On the Monday morning, 700 students showed up,” Jones recalls. “Some had walked as far as 50 km to attend. That’s an indication of how much kids in the Congo want to get an education.”

The largest school built to date can accommodate 600 students. By the end of this year, 10 schools will have been built along with the rehabilitation of two others. Those prior buildings were made of sticks and mud floors. This was especially tough during the rainy season in the Congo which typically runs from mid September until May. Every time it rained, the kids had to be sent home. Now, with the new buildings – complete with roofs – a full day of classes can go on, uninterrupted.

There is also a literacy training centre for adult women, who’ve never had the opportunity to receive an education.

“They provide training in soap making, bread making, garment making and hairdressing,” Jones says. “The idea behind it is that the women will be able to help their families but also perhaps start up little businesses that will assist them with making a living.”

“In 2010 we built our very first healthcare clinic,” Jones proudly says. “We’ll have six finished by the end of this year. They are outfitted with mosquito netting and beds and mattresses and a couple shipments of medical equipment from Canada to some of the different hospitals.”

The biggest project achievement for the Banro Foundation in healthcare has been to build a multipurpose women’s unit at the Panzi Hospital in Bukavu, which is located in the eastern part of the country. The founder of the hospital, Dr. Denis Mukwege, has twice been nominated for the Nobel Peace Prize.

“The hospital serves 3,500 women each year, free of charge,” Jones remarks. “It specializes in providing treatment to women who are victims of sexual violence and has a specialty in reconstructive surgery. This is an extraordinary hospital so we were really proud to play a small part in it.”

As previously mentioned, this past summer the Banro Foundation organized a fundraising event called Celebrate the Congo – a celebration of Congolese art and music. About $112,000 was raised for a new hospital that is currently under construction in the Congo.

Finally, Banro has been part of developing more than 100 km of roads and bridges, which has resulted in vast infrastructure improvements for parts of the Congo. They’ve also put in potable water systems and three basketball courts for recreation and exercise.

One of the criticisms of the mining industry is that a mine will open and greatly increase the living standards for the locals during the 40 or 50 year lifespan of the mine but when the mine eventually closes, living standards collapse again. It’s a negative historic scenario not lost on Jones.

“The goal of the foundation is to ensure that doesn’t happen,” he replies. “We want to make sure people are educated and put a lot of work into alternative livelihoods that in perhaps 100 years when there’s no mining here there will still be a basis for a standard of living.”

In 2011, Banro spent $96 million in Africa, including almost $27 million in the Congo sourcing materials, which included foodstuffs, clothing, construction materials and contracts. The final figure for 2012 is expected to be even higher.