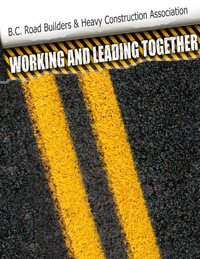 Working and Leading Together

The B.C. Road Builders & Heavy Construction Association started in 1966, founded by twelve firms. The association has grown since its inception to include over 200 members representing privatized highway maintenance contractors, construction contractors, underground/utility contractors, paving contractors and various service and supply companies.  The association is a non-profit organization and is registered under the Societies Act – it is governed by its constitution and by-laws.

In 1989, the maintenance sector joined the association’s construction and service and supply sectors in order to provide a single, unified voice for the industry. On the whole, the association prides itself on bringing the industry together to work together and discuss issues facing the industry, and looks to find solutions to challenges facing every day workers. The association helps the industry maximize business opportunities, and has worked to build a profile with municipal, provincial and federal governments.

The association provides how-to advice and technical advice to member companies and constituents and communicates with a variety of means, including regular newsletters, and networking functions.

Positioning B.C. for success
The B.C. Road Builders and Heavy Construction Association has taken on the position as an advocate for a balanced, safe transportation system and infrastructure development that sustains and promotes B.C.’s economic growth. The organization has a mandate to communicate with the public and with governments about critical transportation issues and the negative impact of highway inefficiencies on the provincial economy. Davison says that “governments are starting to see that infrastructure and business competitiveness is directly linked. In order to feed the economy governments have to put money into infrastructure, so that it is easier and cheaper to do business in B.C.”. He adds that “if you have a good transportation system you will attract business, and consequently capital into the province”. The association promotes the notion that capital investment in public infrastructure should be applied in a consistent and sustainable manner. In their “Building the Road Ahead” position paper (available at www.roadbuilders.bc.ca), the association explains that capital investment must be sufficient to replace B.C.’s current public infrastructure, and says that it must meet the new demands placed upon it by a growing economy.

The association has been successful convincing the government of the industry’s needs, and now it’s up to the industry to sustain and maintain the infrastructure in B.C.

The 2010 Olympic Games
The BCRB & HCA has worked diligently to support the upcoming 2010 Vancouver Olympic Games. Davison says that the association has seen the wealth and stability that the Games have enhanced, and the association is “trying to get as many members involved as possible for a once in a lifetime opportunity”. Whether it’s building roads or venues, from ski jumps to other structures, the possibility for infrastructure projects have been unprecedented. “The Olympics are an example of what can be accomplished with hard work and dedication, and the people of B.C. are excited about the opportunity to showcase what we can do” beams Davison.

The association plans to supply hundreds of volunteers for snow removal during the Games, and also will help erect road signs. Other volunteers will be available to support the torch relay and conduct traffic control.

Building for the future
“Overall,” says Davison “we’ve got an optimistic outlook about the future for our industry and lots of good things to share with members”. Last year the association started a heavy equipment training program and apprenticeship, and is helping get more youth and women involved in taking courses to become heavy equipment operators. The organization is also in the final stages of finishing the plans for a utility installer program.
Davison hopes that the association’s plans to start an industry training organization will come through, which will serve as a branch of the BCRB & HCA and take over all training programs.

Davison says that the association mirrors the industry, and is one focused on building transportation in B.C. and the creation of infrastructure: “Our membership is made up of people that recognize the importance of transportation and infrastructure, and there is an economic necessity for both sectors. We need a strong economy that will support that function”.

Mission Statement
We communicate strong, clear industry positions and expectations to government at all levels.
We promote public awareness, innovative solutions to transportation issues and value to the public for tax dollars spent on infrastructure projects.
We provide training, safety awareness, support, fellowship, ethical leadership, and a strong voice for our members.

The fundamentals
A modern, well maintained and efficient national highways system is critical to the safety and economic well-being of all British Columbians.