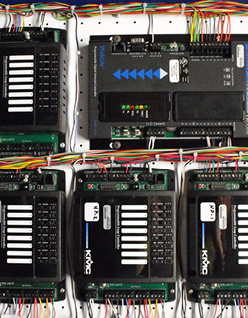 Taking energy management to the next level

No project can move forward without the right control. Nova Scotia’s BCS Controls offers just that.

A representative of U.S.-based KMC Controls, BCS Controls began in 2005 and operates across Atlantic Canada, installing and servicing commercial building controls and automation.

Cecil Hutt, President of BCS Controls, spoke with The Canadian Business Journal about the company’s work across Atlantic Canada, as well as its work in energy management and its future business goals.

“A lot of our business revolves around construction,” Hutt said. “As well, we have quite a customer base with different buildings, and once the systems are in, [customers] like to do additions and upgrades, so we do a lot of service work as well.”

Installing more than 500 projects since the company’s initiation, BCS Controls completes most of its work in the commercial build sector, but the company has also worked on projects including office buildings, retail, pharmacies, schools, and more. Most recently, BCS Controls worked on the Trillium on South Park Condominiums Project, a 19-storey building that is based in Halifax.

One trend that BCS Controls has seen is a growing customer demand for projects emphasizing energy conservation, which results in energy cost reductions. An example is a project in Glace Bay at the Bayplex Recreation Centre where BCS Controls retrofitted a local coal mine to replace an old rink system with a geothermal space system using the water source from the flooded-out coal mine. This energy retrofit project represents part of the Canadian Economic Action Plan.

“It is basically an unlimited amount of energy sitting in the flooded coal mine. They have tapped a well into it and they are now heating and cooling the entire Bayplex facility from that,” Hutt said. “They will save a huge amount of money on their energy bill.”

Of course, reduced energy costs are even more crucial because of the recession, a time when expenditures only continued to grow. The unique offering of BSC Controls, however, saw its volume levels grow during this time.

KMC Controls, operating in Indiana, and of which BCS Controls is the main supplier, was also the only American-based controls manufacturer to also grow its volumes during the recession. Hutt commented, “The recession has been the same with us. It hasn’t hurt us a bit. Business has been steadily increasing.”
The energy and cost saving control systems offered by BCS Controls allows building owners, engineers, and architects to implement this energy management system to see long-term savings in energy costs, outmatching the installation costs of the energy management system.

“The systems cost a bit more than a standalone thermostat but by networking all of these controls together and having them feed into a main handlings and heating system, you can easily reduce your heating and energy costs by 20 to 25 per cent,” Hutt summarized. “It is a very quick pay back on the system. Once the system is fully paid, you’re continually getting those 20 to 25 per cent savings on your energy costs year after year.”

BCS Controls is also looking to implement its web-based systems, covering large geographical areas systemically connected to the Internet and serviceable through remote monitoring. This means that, should an issue arise, BCS Controls, or external building operators and maintenance personnel, can monitor these systems and make repairs when necessary.

Knowledgeable staff, a good product line, and excellent project management represents the competitive advantage of BCS Controls. These attributes make BCS Controls an ideal partner to work alongside and it is something that the company also believes is a reason for its recent business growth.

Hutt concluded, “We strive to get the job done. We know our product well, we install the systems and we make sure they are working properly in order to support the customers.”