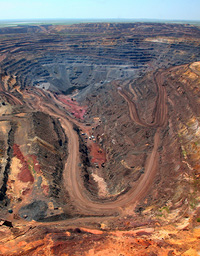 As recently as Jan. 3, Baffinland was recommending its shareholders reject offers from Nunavut Iron and accept the offer by ArcelorMittal until the two companies joined forces and presented a joint bid that valued Baffinland at about $600 million, a plan where ArcelorMittal would come away with 70 per cent of the shares, with the remaining 30 per cent going to Nunavut Iron. As part of Baffinland’s revamp, Phil du Toit, Executive Vice-President of Mining Projects and Exploration for ArcelorMittal, became Baffinland’s new President and CEO.

“The key to the iron ore market is certainly to get access to long life, high quality iron ore bodies,” says du Toit. “And the deposit in Mary River certainly qualifies for that category of high quality and long life.”

Baffinland was formed in 1963 after the discovery of more than 300 million tonnes of high-grade iron ore deposits along the Mary River, about 170 kilometres from Pond Inlet, Nunavut. Iron ore is a commodity that is certainly in demand, and due to growth in emerging markets, it will continue to be for years to come.
In Igloolik, population 2,000, mine construction will generate about 50 full-time jobs initially, and could create hundreds of jobs for local Inuit.

“This is potentially a multi-generation operation that can offer many opportunities to the people of Nunavut,” du Toit says.

Nick Arnatsiaq, a company liaison officer in Igloolik, agrees. “The Baffinland development will have a positive impact on our community, especially in terms of employment, which is indeed a welcoming thing for the community which is virtually zero in terms of economic development.”

Baffin Island’s Arctic location poses unique challenges that du Toit believes ArcelorMittal has the experience to overcome. “The only issue really is the harsh climatic conditions, but there are many mines in the northern part of Canada operating very successfully. The technology today has proven that the industry can operate mines in the northern parts of Canada successfully,” du Toit says.

The Mary River deposit’s location also has its advantages. “If we look at the proximity to market to Western Europe where there is a need for high quality ore, it is well positioned. From that perspective it is an opportune time to bring the Mary River deposit into production,” du Toit says.

Currently, Baffinland is in the process of finalizing all legal and administrative issues, with the takeover expected to be complete by late March. Production is estimated to begin in 2016.

Du Toit is optimistic that ArcelorMittal’s controlling position shows it is serious about getting the mine into production. “[ArcelorMittal] has the financial means to develop [the deposit].  We have a need in the marketplace to see it developed, and we have the technology in terms of iron ore processing and experience in northern climate operations and construction. If you package all that up, ArcelorMittal is well positioned for the Mary River development.

“Nunavut Iron Ore can certainly also bring financing and some of the members have Canadian operating experience—elements that can also bring success to the development.”