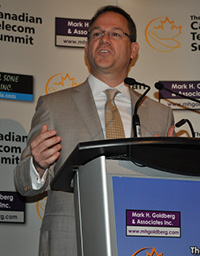 Bell Media is the mass media subsidiary of Bell Canada Enterprises (BCE) and is one of the main significant communications content producers in Canada.  Its multimedia holdings include radio and television stations and new media Internet digital media and broadcasting properties. There are more than 5,000 employees nationwide.

Bell Media was formerly known as Baton Broadcasting and then CTV Inc., one of Canada’s first private-sector television broadcasters. The company was originally established as Bell Globemedia by BCE and the Thomson family in 2001 combining CTV Inc., which Bell had acquired the previous year, and the operations of the The Globe and Mail. Bell sold the majority of its interest in 2006 but re-acquired the entire company, excluding the Globe & Mail last year.

In mid-March Bell Media announced that it was taking over Montreal-based Astral Media for just under $3.4 billion, pending CRTC approval.

During his speech at the Canadian Telecom Summit, President of Bell Media Kevin Crull focused his attention on the positives of the industry, believing much more is to come in the future.

“More Canadians subscribe to Pay TV than in any other developed country,” Crull noted.  “The penetration of PAY TV is very high, which reflects the quality of it and also the value; we pay lower prices than any of the other G7 countries.”

For the creative community, it translates into 128,000 full-time employees work in the content creation business across the country, with the end result being a $7 billion contributor to the national gross domestic product.  There were some 400 major projects developed over the various national networks.

“The vibrant broadband industry that we have with very high penetration of high-speed of 5 Mb and over also drives huge consumption of online video,” Crull said.  “Canadians consume more online video than any other developed country.”

Crull says he finds it disheartening at times that there’s a Canadian culture demonizing scale.  Crull asks whether scale is good or bad when considering public benefits of an enterprise.

“The Progressive Policy Institute is a think tank in America who says ‘scale is the driver of American prosperity when achieved through honest competition,’” Crull stated.  “The biggest drags on the economy are lack of investment, weak innovation and emphasis on consumption rather than production.”

On the network side, Bell Media has spent a great deal of money on distribution technologies leaving Crull believing Bell has some of the best end-to-end wireless, wire line and satellite distribution networks in the world.

Wire line on the other hand is no longer a robust growth business.  It’s a mature business that spins off a fair amount of cash but it’s safe to say it has reached its maximum potential.  That leaves companies looking to find other areas for their next wave of growth.  The media business, and specifically content production is a natural fit in many circumstances.  As the old saying goes “Content is King”.

Crull says it makes good sense for many reasons.

“Convergence of technology is clear,” he said.  “All of this investment in network capabilities is making more screens and more opportunity to consume content.”

In June 2009, after an extensive review of content delivered on the Internet and mobile, the CRTC determined there would not be a regulatory framework for mobile and broadband delivered content – because it would only serve to mess things up with unnecessary bureaucracy.

The commission also looked at news and sports and determined it could deregulate the oversight of news and sports as categories; they’d allow for that and open those genres for new competitors to launch new services while also permitting free-market negotiation on the part of the owners of the content to distributors.  Earlier this year the commission confirmed its support for value for signal regime, which would provide a dual revenue stream for conventional television.

With those commission decisions firmly in place, BCE then purchased CTVGlobemedia, the leading content and media company in Canada.

“The portfolio of assets is very exciting,” Crull said.  “There’s specialty television, conventional television, news, entertainment, radio now more recently big investments in digital has also had a big impact.  When you think of the reach of these properties, 90 per cent of every single Canadian either sees or hears our properties multiple times a day.”

The topic of vertical business integration versus the merits of independence is one that often brings up very dissenting views.  Crull is of the opinion that integration is an excellent strategy, largely based on how investments seemed to become far more plentiful following convergence.

“Vertical integration in Canada is not new; it’s been here for a long, long time,” he remarked. “Rogers has owned magazines, radio stations, sports teams and stadiums and television stations.  Shaw had a controlling interest in Corus and then bought Canwest.”

“We understand the need for regulation and we respect it highly, but we don’t have high regard for regulatory flip-flopping.  Businesses make decisions based on rules that are in place and commit billions of dollars of capital.”

Those on the other side of the fence would argue convergence leads to fewer options for the consumer; and with fewer options the concern is that higher prices are bound to follow due to a lack of competition in the marketplace.  It’s an argument that won’t be resolved anytime soon.

Another unique factor for the Canadian broadcast industry, unlike any other situation in the world is the so-called 800-pound gorilla of media content to the south – the United States and its massive broadcasting reach.  It’s a challenge Canadian broadcasters must always have at the forefront of their collective minds.

Much of Canadian viewing doesn’t get monetized by the national broadcast industry with the litany of American channels from which to select.

“About 40 per cent of the TV that gets viewed, those are leaking eyeballs out of our industry.  As a result advertising per capita is very underdeveloped and is about half what it is in the U.S.”

That’s because there’s the option to view American networks such as ABC, CBS, NBC and FOX, and that’s unequalled anywhere else in the world.  It creates a massive complex situation for the Canadian broadcast industry which is often left trying to prove to people that our programming is on the same level as that of the Americans.

Simultaneous substitution has also not been the perfect solution as had originally been hoped, solving some of the issues for over-the-air broadcasters – but certainly not in a sufficient manner.  It’s the process of inserting Canadian commercials on an American network, simulcast here on one of the Canadian networks.   New media online is already adding to the interesting dynamic with all sorts of possibilities, where it’s possible to watch programming without anyone being paid – other than the individual’s ISP.   Technology hasn’t quite caught up for ad insertions and ad measurement, which leads to a lot of leakage in the media space.  You can bet broadcasters are working on ways to have that leak sealed.