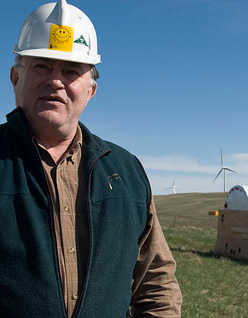 Wind energy is perhaps the world’s best form of renewable clean green energy, growing globally by some 35 per cent a year, something Benign Energy Canada II Inc (BECI) is working diligently to promote.

BECII I is a privately-owned wind energy company based in Alberta and is owned by Allan Kettles, CEO of BEC II I, and a man whose dedication and passion to creating clean energy for Canadians is all encompassing. Part of Kettles’ inspiration comes from his son, who, when he was 10 years old, did a science project asking “could we heat our Calgary home with Wind and Solar?”

“This started our journey to being “hooked on wind,” says Kettles, “and the long journey from 1993, to leases in 1999, to the final completion of the Kettles Hill project in 2007.”

Built in two phases of 2005 and 2007, the Kettles Hill Wind Farm is a 63 Megawatt (MW) wind-power generating facility on the south side of Pincher Creek, Alta.

Run for a short time after completion by Kettles, the farm is the manifestation of the dedication of a great team, and many, many days of hard work and perseverance and a belief in the future of wind energy—truly green energy.

The second phase of the project was completed with 30 more Vestas V80 turbines for a total of 63MW name plate capacity in Canada’s best known wind regime of Southern Alberta and its prevailing westerly Chinook winds, and was the first wind farm company listed on Natural Resources Canada Wind Power Production Incentive Program (WPPI), now known as the ecoEnergy program. The wind farm is connected to the Alberta transmission network, and is now owned and operated by ENMAX.

“If it takes a village to raise a child, then it takes a city to build a wind farm,” says Kettles, meaning no wind farm ever gets built without alliances and global help and resources.

The company’s second wind farm is Heritage Wind Farm, to be built on the other side of the Pincher Creek. Although Heritage was conceptualized and started with the same, proven expertise as Kettles Wind Farm, and despite the proven capacity of the wind farm to generate cost-effective wind production, Heritage’s status has been up in the air. Energy production had stalled because it could not get on a transmission grid.

“As is the case in the U.S., Europe and other arenas in the global world of wind energy, the Heritage Wind Farm awaits upcoming transmission infrastructure approvals from the Alberta Department of Energy and Alberta Utilities Commission (AUC),” says Kettles. “Having said that, an aggressive series of transmission projects are now underway in Alberta, and in particular, Southern Alberta, with the AUC approval of the Southern Alberta Transmission Reinforcement system (SATR). This transmission approval links from Pincher Creek to Lethbridge, to Medicine Hat and back to Calgary. Included in the mix of some 7,500MW of wind projects, projects waiting for transmission is BEC II I’s Heritage Wind Farm Development Inc. 300MW project.”

Wind energy up in the air

Originally proposed at the AUC in 2006, the Heritage wind farm has been dormant, awaiting attachment to a transmission grid. However, it seems like the winds of change are turning for Benign Energy. In early June, the Alberta Utilities Commission provided the project the go ahead which will include 97 turbines atop 80-metre tall towers straddling two townships within Alberta’s premier wind corridor.

The approval, was a “small victory for southern Albertans who support renewable wind power to green the province,” says Kettles.

“Our goal is to help convince the government that wind energy is and can be contributing to significant economic diversification that appears to have been an unachieved Alberta goal for 40 years,” he continues.  BECI’s indefatigable dedication to getting clean energy to Albertans is commendable, and an inspiration to Canadian businesses in any industry to stay the course. Thanks to BECI, Albertans have 63MW of clean emissions free, water free, electricity for 25 years, not to mention the $500,000 directed  to the municipal district to help agricultural ratepayers keep taxes lower and significant 25 year royalties to project farmers and ranchers for a better Alberta agriculture and a new generation farm families.

“Perhaps most important legacy of all is the BECI contribution to greening the Alberta economy,” says Kettles. “This is the essence of emission free renewable energy.”

Looking forward, BECI will help the Alberta Government to incent wind in some manner that exists in every other province in Canada and almost every state in the United States. With dozens of mechanisms available and globally proven, Kettles believes one will be right for Alberta.