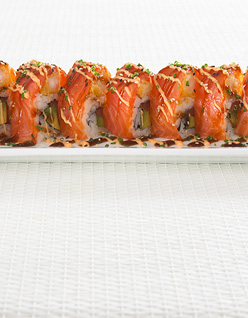 “The key to good sushi is great rice done right. When you are rolling sushi you want to be able to see every grain of rice. When you do not that means that too much force has been applied which leads to poorer quality.”

Frank Hennessey spends a lot of time thinking about the art of sushi. As President and CEO of Bento Sushi, creating the freshest, highest quality sushi one piece at a time, is of the utmost importance.

Developed around a menu of traditional and specialty rolls, combos, platters and entrée selections, Bento Sushi is the country’s largest sushi company in one of the fastest growing food categories.

The secret behind Bento Sushi’s success is its attention to detail, accessible price points and massive distribution channels in every one of the major grocery chains in Canada. Bento Sushi has a growing number of Quick Service Restaurant (QSR) retail locations in office towers and shopping malls to complement the three storefront restaurants that are currently operating on Broadway in New York City.

Since its opening in 1996, Bento Sushi has defined itself as the best in the Grab and Go market, making the once exotic food readily accessible and affordable to the tune of 12 million packs of sushi sold annually, while maintaining the integral art form of the food.

Bento Sushi employs over 1,100 sushi chefs, all trained under the eye of executive chef Daniel Henderson.  According to Henderson, what separates a sushi chef from a regular chef is patience. “While most chefs are trained to work quickly in busy restaurants, sushi takes the opposite approach with chefs learning the importance of discipline and working with a calm demeanour.”

Bento Sushi chefs are preparing sushi daily. And what isn’t purchased that day is discarded. “There is a healthy shrink component that has to be managed very effectively,” says Hennessey. “Our onsite program means our chefs make that sushi right inside the grocery store — it’s made fresh every day and in many cases, within the last hour.”

If a customer wants something that they do not see in the cooler, the sushi chef is there and able to make it for them. This element of customization is, and will become, more and more important with consumers. “With our sushi chefs being present in the store, we can capture that need,” says Hennessey.

And unlike some sushi companies who use a mechanical process to make the rice, Bento Sushi has that “old world handcrafted product where the rice is laid out by hand, for every pack of sushi.” In fact, you are probably familiar with the Bento Sushi’s bar at your local grocer. This, says Hennessey, is a winning combination of a wonderful product and a straightforward operation. And while Bento Sushi is dominant in most markets, the company shows no sign of slowing down, with projected growth in the double digits for the coming year.
“There is always room for expansion,” says Hennessey. “There is a very healthy amount of organic growth because the category is growing. Our point of

differentiation is that we are continually innovating our products. We aren’t satisfied to just have one product and leave it alone.  In changing Bento’s menu, we are bringing continual innovation because that is what our customers and grocery partners expect.”