At every juncture of our lives we all want to reside in a home that is most comfortable to suit our daily needs and desires. For the past 18 years Berwick Retirement Communities has provided a dedicated commitment to retired citizens on Vancouver Island in what is widely regarded as the best in independent living, assisted living and licensed residential care services anywhere on the west coast. It is a vibrant network of communities created by caring people where the individual needs of the residents always come first.

The Canadian Business Journal recently spoke with retired founder Gordon Denford and his son Chris Denford, who leads the day-to-day operations from the company’s head office in Victoria. There are currently six residential locations: Gordon Head and Royal Oak in Victoria; Campbell River; Comox; Kamloops; and Nanaimo. A seventh location, Qualicum Beach, is in the final stages of completion.

Gordon Denford was inspired by the idea of opening his own retirement home as far back as 1978 while working with a partner on a project called Summergate Village in Sidney B.C., which consisted of 33 acres beside the Victoria airport. It had 245 homes within the subdivision with lot sizes of 3,500-square feet and up. The project accommodated manufactured homes that were either single-wide or double-wide. The expected target market was to be those who had recently retired, in an age group of 65 to 75. But it turned out the assumed target market was not as expected.

“When the first cul de sacs were done we found they were not our target market. In fact, most of the sales were going to single women aged 75 or older and certainly some single men as well,” states Gordon.

Denford and his partner elicited focus groups on these people to find out what motivated them and it turns out many had been widowed for two or three years and had bought a condominium and yet still didn’t know most of the neighbours just down the road. What really attracted them was a small single-family dwelling on a small lot with all the landscaping taken care of within the strata fees. An important aspect was having a seven-acre park incorporated in the project, plus a community center with a dance floor kitchen, lap pool and library.

Gordon Denford determined that when the time came he would look to incorporate this business plan into one single building and add to it a care component. By 1987 the environment was suitable to consider this type of residence. The first was Berwick House, with 138 units, 38 of which were licensed private care. The remaining units were independent suites.

“It was radically different from the way retirement place were being built at that time or of the history of them. We got our financing to build the first one in Saskatchewan with support from two pension funds, and we’ve never looked back and we’ve steadily improved the model ever since,” recalls Gordon.

As the CEO at Berwick Retirement Communities, Chris works closely with the company’s architectural team in designing each of their retirement communities. It’s a career path he knew he wanted to follow from a very young age.

Gordon and Chris Denford share a love and passion for quality architecture and design and they have always managed their own buildings. The expectations of seniors in 1989 were not particularly strong, with a substantial amount of product built between 1960 and 1985 mostly consisting of apartment blocks with minimum kitchen and dining room facilities. It was a deficiency that both men were determined to address head on.

“There was no sense of a connection. What we needed to do was provide more amenities to encourage a greater connection with the community but also with families as well,” says Gordon.

At Berwick Retirement Communities the residents have numerous amenities to select from including a wide variety of eating options from bistros to fine dining and pubs for casual nights out.

Both father and son provide the overall big-picture management but don’t get involved in the micromanaging of each building. It is their belief that each of the communities deserves a certain amount of autonomy to operate within the overall framework and structure of Berwick to suit their individual community and unique identifying characteristics. A general manager takes the reins of the day-to-day operations at each of the residences and there are department heads to ensure daily services are carried out.

“All of our GMs report to our chief operating officer, who in turn reports to dad and me,” says Chris. “As we grow we are really reinforcing best practices in all of our buildings and that’s ongoing. As we learn we share new ideas with all the buildings.”

The management style that has been instilled by Gordon and Chris is one that promotes inclusivity with the various heads of each building. They gather together periodically to share ideas, which also serves to motivate and create a team bonding atmosphere.

Berwick Retirement Communities abides by the principle of providing a continuum of care. Many retirees have lived in the residences for years and it’s comfortably become their home, where they develop close relationships with employees and other residents. Gordon and Chris Denford are always committed to ensuring the best quality of their retirement homes in terms of the infrastructure, the employees and even the physical location of the building.

“We are very fussy when it comes to choosing our locations. In fact, we’ve passed on communities when we couldn’t secure a site we felt was going to be worthy of a nice retirement residence. We are not afraid to purpose design the facility for the community,” emphasizes Chris.

A cookie-cutter approach is something that has never been acceptable, with each residence having its own unique characteristics. Gordon and Chris put their heart and soul into every project and it’s something they expect from everyone who’s a part of the extended Berwick team.

“When we went into Campbell River we were told by some that it’s a smaller community and we might want to just do a ‘Berwick Light’. Why would I want to do that? I think we shocked a lot of people because our facility in Campbell River really is at – or above – the level of our other buildings,” remarks Chris.

The people of Berwick are the most important component of the business and its success. As Chris is quick to point out, a company can construct the best building imaginable but it will be all for naught if it is staffed with the wrong people. Providing a wide variety of food services is also a big part of success. Over the past few years the Gordon, Chris and the management team have been examining the six current locations to see how they can be enhanced, especially where food services is concerned.

“We bought land next door to our building in Comox to expand Berwick Comox Valley. Our expansion was not so much to add 34 suites but the big impetus was really to improve our food services options. It allowed us to add a bistro and a pub,” says Chris. “I’m quite involved with the planning of the pub space. Because it has an airbase in the community we decided to base it on an English country pub model. I have been sourcing antiques for the past year. We’ve called it the Grounded Pilot.”

Each Berwick building is custom designed to be best suited for the individual communities where they are located. Real estate investment trusts and pension funds also occupy the space of building retirement homes, but their corporate decisions can typically take months, whereas Berwick will most often have a bona-fide solution within a matter of hours.

Giving back to the community is something both Gordon and Chris are staunch believers in, which is why Berwick provides a generous amount of charitable support to the likes of the United Way and the Victoria Foundation.

“We allow community groups to come in and hold events in our meeting rooms. It’s also a great way to keep our residents connected to the outside community,” says Chris.

The development of the entire network of Berwick Retirement Communities has been concentrated on Vancouver Island over the past 30 years. The seventh location to join the group of residences is Qualicum Beach and the eighth will be Parksville.

“We are going to continue to look more on the island but it may very well be that we turn our attention to the mainland. We really enjoy what we do and what makes it really a lot of fun for us is to have a real hands-on involvement with the design and planning. Over the next few years I would see us acquiring one or two more sites or at least have the communities identified,” predicts Chris.

“It’s been a real joy to have done all of this with Chris,” concludes Gordon. 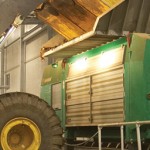