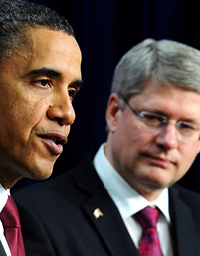 At the core of the declaration is protecting and increasing bilateral trade through economic competitiveness and the creation of a regulatory cooperation council.
The pact will see Canada and the U.S. moving toward a shared security perimeter around the two countries. The objective of the pact will be to “streamline and decongest” the Canada-U.S. border, increasing bilateral trade movement.

Canada and the U.S. are each other’s largest export markets, with Canada exporting more to the United States than Mexico, Japan or all Europe combined. Harper continued, “Canada is the largest, the most secure, the most stable, and the friendliest supplier of that most vital of all America’s purchases: energy.”
Besides also enhancing security, the declaration “also commits us to finding ways to eliminate regulatory barriers to cross-border trade and travel, because simpler rules lead to lower costs for businesses and consumers, and ultimately to more jobs,” said Harper.

“They make possible the effective risk management that will allow us to accelerate legitimate flows of people and goods between our countries, while strengthening our physical security and economic competitiveness,” said Harper.

So we commit to expanding our management of the border to the concept of a North American perimeter, not to replace or eliminate the border, but where possible to streamline and decongest it.

In a speech given by Obama, the president cited $1 billion worth of trade crosses our shared borders, or “parameters”, daily, and this joint effort will continue to benefit both economies.

The declaration shows Obama and Harper promising to focus investment in “modern infrastructure and technology at our busiest land ports of entry”, essential to economic viability in the 21st century. Harper intends to do this by ensuring that border crossings have “the capacity to support the volume of commercial and passenger traffic inherent to economic growth and job creation on both sides of the border.”

Planning and organizing the binational port of entry committees to coordinate planning and funding, building, expanding or modernizing shared border management facilities and border infrastructure where appropriate, and using information technology solutions for the improvement of risk-management practices, Harper continued.

The Canadian Trucking Association (CTA) was quick to respond the declaration, citing optimism for a plan that will unburden congestion at the border. In a statement to the media, the CTA said at least once every three seconds a truck crosses the Canada-U.S. border, a border which CTA says has thickened considerably over the past decade in the wake of the terrorist attacks of 9/11. “We have been calling upon the governments on both sides of the border to enter into a new shared, smart border agreement for some time,” says CTA’s President and CEO David Bradley. “We are hopeful this process will lead to a better balance between security and trade imperatives, restores a risk management approach to the border and a meaningful return on investment in the trusted trader programs.”

Opponents of the deal question why it was announced prior to going before Congress and parliament, with the National Post calling the deal the “product of several months of behind-the-scenes preliminary work” and “the most significant change in the Canada-U.S. border relationship since NATO.”