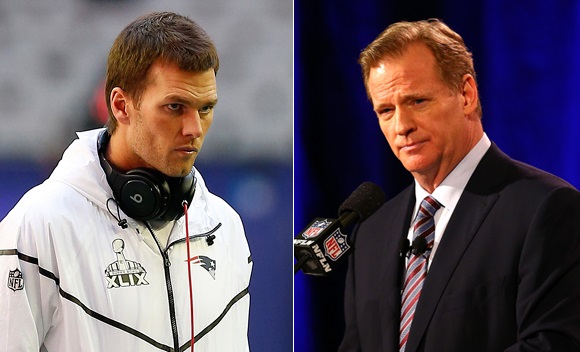 CBJ – Once again Tom Brady (pictured at left) has staged a late 4th quarter comeback, but this time it wasn’t on the football field, but rather in a New York courtroom where U.S. District Court Judge Richard Berman nullified a four-game suspension handed to the New England Patriots quarterback in an ongoing saga that has become known as “Deflategate”.

The big loser in all of this is NFL Commissioner Roger Goodell (pictured on the right).  There are those who believe Goodell came down hard on Brady for two primary reasons: the first being that he was far too lenient in previous punishments, most notably when Ray Rice of the Baltimore Ravens was originally handed a one-game suspension when video evidence surfaced of him knocking out his then girlfriend (now wife) in an elevator.  Goodell has repeatedly claimed he did not see the video evidence prior to handing out the suspension, but many find that hard to believe, especially since a copy of the tape had been sent to the NFL head offices in New York.

Because of the huge fallout from the way he handled the Ray Rice affair, it was widely speculated that Goodell would come down hard on the next player to go wayward of the rules, and it just happened to be Brady and the Patriots.  Footballs used by the Patriots were found to be under-inflated during key games last season.  The rules stipulate a fine of $25,000 for tampering with equipment.  However, it’s thought that Goodell gave Brady a four-game banishment due to his unwillingness to cooperate with the investigation and an assumption of guilt in the eyes of the Commissioner.

Goodell said in his decision to uphold the four-game suspension after hearing Brady’s appeal on June 23 that Brady intentionally destroyed a cell phone on or shortly after being asked for access to the device. Goodell upheld the suspension on July 29, prompting Brady and the NFLPA to file suit in federal court.

Judge Berman continuously pushed for a settlement in the dispute, saying it would be “rational and logical.” That right there should have been a warning to the NFL that the judge felt the punishment far exceeded the crime, but wanted to give Goodell and the NFL a way out in order to save face. Instead, Goodell stuck in his heels and now he’s left looking foolish in the eyes of many, including some NFL owners, who are quietly wondering whether Goodell’s leadership is what they want.  This is a very publicly humiliating loss for the commissioner, and one that he may not be able to survive.

Brady would have missed the Patriots’ first four regular-season games: the Sept. 10 home opener against the Pittsburgh Steelers, Sept. 20 at the Buffalo Bills and Sept. 27 at home against the Jacksonville Jaguars. After a Week 4 bye, the Patriots visit the Dallas Cowboys on Oct 11. Second-year quarterback Jimmy Garoppolo would have started in place of Brady.

The 38-year-old Brady would have been eligible to return in Week 6 at Indianapolis in a Sunday night game against the team that helped pave the way for the investigation.

After routing the Colts 45-7 to advance to the Super Bowl, the Patriots beat the Seattle Seahawks 28-24 to win their fourth title.

Regarding agreement on sale of commercial part of business of wholesale electricity trade of “Lietuvos energijos gamyba”, AB