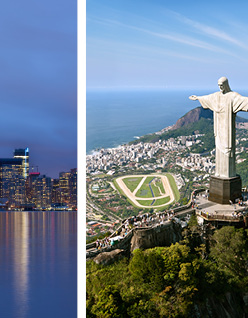 Raul Papaleo, President of the Brazil Canada Chamber of Commerce, stated that annual trade between Canada and Brazil has now reached about $7 billion, a notably increase, but still relatively small when you consider that the combined GDP of the two nations tops $4 trillion. Over the last four to five years, investment has increased, so expecting a future trade increase between Canada and Brazil is only natural as well.

“The trade is very small, but now we have the space and the patience of both governments to increase the level of trade,” Papaleo said. “Our role in this is to foster the increase in trade and increase in investment between Canada and Brazil.”

Beginning in 1973, the Brazil Canada Chamber of Commerce works to secure business memberships as part of its association. Last year, the chamber had 67 corporate members, a figure that has now doubled in one year. Such explosive growth means that the Brazil Canada Chamber of Commerce is achieving its mandate of networking and building contact companies and people interested in conducting business in Brazil and business in Canada.

The Brazil Canada Chamber of Commerce advocates its objectives through close ties with federal governments in both nations, as well as the ministries of foreign affairs and provides critical information that is of utmost value to those who conduct businesses in a foreign nation like Brazil, or Brazilian companies conducting business in Canada.

“The first and most evident sector that presents opportunities for companies in both countries to join or to establish their own operations in the other country is information technology and communication,” Papaleo said. “This is the most evident opportunity, but we have large opportunities in terms of size of projects in the infrastructure area.”

Notably, opportunities exist in research and development, engineering, and manufacturing, particularly in Brazil. This allows for Canadian organizations to offer their expertise in these areas, such as assisting in building infrastructure in Brazil. With a need for new roads, highways, airports, and buildings, Brazilian cities must remodel to accommodate for traffic requirements.

What other opportunities exist for Canadian companies operating and investing in Brazil? One example, in Brazil’s largest city, Sao Paulo, overwhelming population and traffic has driven demands for a monorail, rail-based transportation, to increase efficiency and reduce congestion. The value of such a system is more than $1 billion, according to Papaleo. Monorails represent a ‘new era’ way of thinking in terms of transportation, and also tie in with reductions in greenhouse gas emissions, energy conservation and efficiency, and clean energy.

There are also opportunities in Brazil to become involved in oil and gas extraction, with more than $60 million outlined for future investments in new oil wells, allowing the country to become the first- or second-largest oil producing nation in the world, according to Papaleo.

Ease of operations between the two nations is also fruitful because Canada and Brazil are similar in many ways, however, Papaleo feels Canadian businesses would be able to help Brazil-based companies become more advanced in renewable energy production, such as wind energy and solar energy. It is an area he expects will see much growth in Brazil over the coming two to three years, partly because Canada is considered an advanced nation in terms of renewable energy and production.

Brazil has committed to sustainable means, through clean-tech energy and energy sources. These represent a Canadian growth sector and an area of opportunity and expertise where Canadian organizations would be able to assist those in Brazil.

The Brazil Canada Chamber of Commerce seems more growth ahead, and has an aggressive target for growing its corporate membership, something it feels only adds further value to its core operations.

The chamber strives for a 50 per cent increase in trade and investment over the next two years, while it is also hoping for a repeat performance in doubling its member size.

To Be Canada, an organization that identifies and supports business opportunities in Canada and Brazil, and was featured in the October issue of The Canadian Business Journal, is a member of the Brazil Canada Chamber of Commerce.