By George A. Santino

It’s a fact that it takes a great product to help make a company successful, and it’s also true that products don’t get built without talented managers leading strong teams. If your goal is to become a successful manager or supervisor, you have to start by building a great team.

If you already have a team, do any of your current members meet the needs of the new project? If yours is a company that encourages moving people between teams and departments, are there people already in the company who would be a good fit? If you have to post the job outside the company, make sure you clearly spell out the requirements in order to get the right people applying.

Once you have a few applicants and you’re ready to begin the interview process, make sure you have a diverse set of employees ready to conduct the interviews. Unless you’re a one-person shop, always try to have at least three or four people interview each applicant. You should conduct the final interview with the candidate after you’ve heard everyone else’s feedback.

Once the project begins make sure to ask for and give plenty of feedback. People want and deserve to know how they’re doing. In fact they need to know. How else can they adjust their course towards exceptional performance if they aren’t getting feedback? You should also want to receive feedback from your team. Do they think things are going well? Would they change anything? How am I doing? Frankly, I would much rather hear that there’s something I could improve from one of my employees, rather than hearing it from my boss.

While it’s true that employees love to hear that they’re doing a great job, they also need to be told when they aren’t performing up to snuff. I’m not talking about negative feedback. I’m talking about constructive criticism with actionable advice. I’ve known a lot of managers in my career who were quick to say “Good job,” but would never say “Bad job.” Most companies have a performance review system, however. At some point the employee is going to get that honest feedback and at a time when it is tied to a raise, promotion, or bonus. That is hardly the time to tell someone they could have done better. It’s too late. The bonus has been decided. I have no doubt that the employee would have loved to hear this feedback in time to do something about it before the formal review. That is not to say that every employee will make the adjustment towards exceptional performance, but they at least have to be given the option.

Once you get to the formal performance review process make sure you reward the right people. We all have a finite budget when it comes to raises and bonuses and we want everyone to be happy, but the reality of review time is that some people will be happy and some won’t. I’ve known managers who want everybody to be happy so they peanut butter the rewards. That is, they try to give everybody something, but by doing so everybody gets only a little. Of course, your underperformers might be happy with this, but what about the people who busted their butts for you? The ones who achieved great results and gave up their nights and weekends to get the work done? How are they going to react when they learn they got the same bonus as the guy who put in very little effort? And trust me, they will find out, no matter how confidential your review process is.

The bottom line is, you want the people who put in the effort and got results—it’s not just about the hours they worked, it must equate to results—to be the ones who are happy. You want them to think it was worth it and to repeat the behavior. You want your underperformers to see that results matter so that they put in more effort next time; if they don’t, you want them to know they won’t get the rewards. They can’t all be superstars.

Building a great team leads to producing great results, but only if you’re also a great leader. Hiring a great team is a good start. Giving them the proper actionable feedback along the way fosters achieving those results. But to truly be their leader you have to lead, and I think that the easiest way to lead is to do so by example.

I talked about soliciting your employees’ ideas and feedback. I also mentioned telling them the ‘why’ along with the ‘how’. I also think it’s important for them to understand what you bring to the table. You shouldn’t be one of those managers that comes down from the executive floor, shouts orders, and then heads back into your sanctuary. Instead you should let them know what you’re working on. It doesn’t have to be directly related to the project. At Microsoft I might say, I need you guys to do x, y, or z and I’m heading back to my office to work on the budget. When I was a manager at Wendy’s I might say, you do the trash run, you clean the kitchen, and I’ll clean the grill. It doesn’t really matter. One thing you don’t want is to have employees putting in serious effort and thinking you’re not in it with them. This is especially true in crunch mode. If it’s time to really pick it up to the point where you might even need your guys to come in on the weekend to get the work done, be there with them. Even if they’re working on something where you really can’t add any value, just showing up or bringing them some sandwiches is enough to tell them that it truly matters and that you care and appreciate their effort.

Of course a very important aspect of building and maintaining a great team is to have fun. It’s very easy to get focused on the work and on getting great results but it is also easy to burn your people out. While everyone can step up in crunch time, nobody wants constant crunch time. So lighten up. After you hit a date or a milestone, celebrate. Take the team out bowling or go-cart racing or even to a simple lunch or happy hour. Whatever the team is into or would enjoy. And make sure you join them. Even in the midst of the project, do things to make it fun. I mentioned bringing in sandwiches when your team is working on the weekend, but how about ice cream or pies when they’re working at night or even in the middle of the day. It doesn’t really matter what it is but the gesture shows the team that you’re all in this together.

Do these things: Hire smart people; people smarter than you. Give them timely actionable feedback. Reward great results. Explain the how and the why. Listen to your team’s suggestions and feedback. Lead by example. And have fun. If you do these things you’ll not only build a great, highly effective team, but you’ll also build a loyal team that will do anything for you and go anywhere with you. Once you have a team like that, building the next one becomes even easier.

George A. Santino helps people who want to break down barriers, including self-imposed barriers, to success. Check out his new book Get Back Up: From the Streets to Microsoft Suites which was an Amazon bestseller. 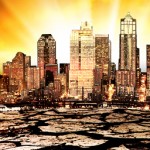 Is Your Business Up To Fighting Climate change?