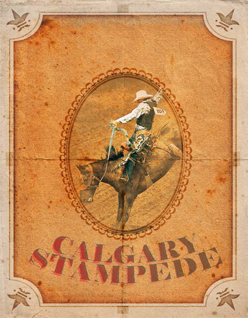 …there was the ranching industry. Since the earliest day, ranching has been a major part of the Alberta identity, economy and culture. It’s no coincidence that the same spirit—pioneering, risk taking, industrious—is also integral to the oil and gas industry. The Stampede is the perfect backdrop for our Alberta focus; it’s an unbridled celebration of everything the province has to offer, and a colourful display of the province’s culture and riches.

From the days of the first settlers, the ranching industry was an important contributor to the economy and culture of the Calgary area. And to celebrate that heritage and the days of the wild west, every year since 1912, the city of Calgary has put on what it likes to call “The Greatest Outdoor Show on Earth”, the Calgary Stampede.

Go big or go home: it’s intrinsically Albertan. The Stampede is designed to celebrate all Western heritage and values, according to Doug Fraser, Manager, Media Relations. The annual rodeo, exhibition and festival takes place over ten days from July 8 to 17 on 193 acres in the heart of downtown Calgary.

“This is what we promote, our core purpose, “says Fraser. “We know that Calgary is a very advanced metropolitan, but we don’t forget our roots.”

For organizers, the Stampede is a year-round event. “We are going just as much as we can possibly handle,” says Fraser, in these last few weeks. “People start talking about [the Stampede] days after the last one closes,” he says. “It’s just one of those times in the year when people start to get excited. This is what makes the Stampede different from virtually any other event in the country. Many cities have good fairs and exhibitions, but none of them embrace the city like the Calgary Stampede does.”

The Calgary Stampede is the ideal platform for Alberta to show off what it’s made of to the 3,600,000 people who visit Stampede Park every year. In fact, there are so many visitors every day that Stampede City becomes the third largest city in the province.

With more than 180 attractions and events daily, The Greatest Outdoor Show on Earth will again challenge every visitor who hopes to see it all.  “Actually, our research shows that most guests visit twice and still don’t cover everything,” says Jim Laurendeau, director, Stampede Programming. “Experiencing all the new features in addition to old favourites is virtually impossible to do in just one or two days.”

The Stampede has always been lauded for its positive impact on the city. In 1944, then Mayor Andrew Davison said that it “had done more to advertise Calgary than any single agency.” It’s also a considerable generator of revenue for the province; park visitors spend $345 million annually. Estimates suggest that every dollar spent at the Stampede equals $2.65 spent in the city. “The economic impact of the Stampede is significant,” says Fraser. “The Stampede contributes $300 million to the City of Calgary; for the province of Alberta, it is $325 million.”

Michael Casey was named President and Chairman of the Stampede in March of this year. Casey, a lawyer by trade, has a remarkable three decades of volunteering at the Stampede under his belt, and has been a board member since 1997.

“As a volunteer for more than 35 years, I have seen how the Stampede brings our community together, so I am humbled to take on this leadership role particularly as we prepare for the organization’s Centennial celebrations in 2012,” says Casey.

One of his first official acts was to name Rick Hansen, the “Man in Motion”, as this year’s parade marshal. “He has dedicated his life to helping others and inspiring Canadians to do the same. He’s one of Canada’s most recognized and respected ambassadors, beloved worldwide as an icon of perseverance and hard work.”

During their first official visit to Canada as the Duke and Duchess of Cambridge, Prince William and Catherine will be guests of honour at this year’s Stampede and are scheduled to take part in a downtown parade, and might even take part in the chuckwagon event, “throwing the stove into the wagon for the race start,” says Casey. “The royals are the ones who asked to be able to participate and see some of our iconic western events and in fact were very keen to see what rodeo is all about,” Casey told the Calgary Herald.

“Albertans are delighted that Their Royal Highnesses will be travelling to our province during their first international tour as a married couple,” said Premier Ed Stelmach.  “The Royal Tour will showcase some great examples of our cultural heritage and ingenuity and it is my sincere hope that the visit will help build a lasting relationship between Their Royal Highnesses and the people of Alberta.”

The Calgary Stampede is rooted in Alberta’s western heritage, and celebrates the province’s contribution to the national economy, political landscape, energy needs and economy. Although the oil and gas industry is now the province’s main economic engine, agriculture is a very respected and important sector, nationally and internationally. There is so much to share, ten days barely covers it.