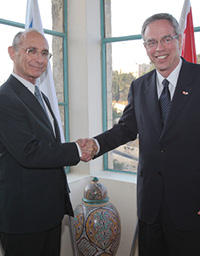 Canada and Israel have signed an energy agreement that the federal government hopes will advance Canada’s energy interests and create a greater number of jobs and economic prosperity. Additionally, the agreement is aimed at strengthening ties between the two nations while at the same time increasing bilateral relations on offshore development, new sources of oil and gas supplies, and renewable energy.

Minister of Natural Resources Joe Oliver and Dr. Uzi Landau, Israeli Minister of Energy and Water Resources, signed the agreement in Tel Aviv, Israel. Two days later, Oliver sat down with Israeli Prime Minister Benjamin Netanyahu where they discussed the shared interest in the development of natural resources and other bilateral issues.

“We see tremendous opportunities for Canada and Israel to cooperate more closely on energy issues.” said Minister Oliver, shortly after signing the pact. “The agreement underscores the important strategic relationship between Canada and Israel.”

In the development of offshore resources, Canada and Israel agree to strengthen cooperation in offshore oil and gas management through an ongoing exchange of information and expertise on policy and regulatory issues, as well as through the promotion of industrial cooperation between their respective offshore sectors.

On new sources of oil and gas supplies, the two countries have agreed to explore opportunities for collaboration to reduce environmental impacts and to improve practices for the responsible development and use of unconventional oil and gas resources.

The two sides have also made the commitment to seize opportunities to ensure that knowledge and lessons learned related to these new sources of oil and gas supplies are shared on a regular basis, which will benefit both parties.

“We have achieved tremendous progress in trade, investment innovation and scientific collaboration since signing a free trade agreement with Israel 15 years ago,” said Minister Oliver. “Canada’s role as a global energy supplier and continued interest in energy cooperation with Israel underscores the important strategic relationship between the two countries.”

Oliver noted that Canada’s natural resource megaprojects over the next 10 years will be worth more than $500 billion. Over the last 18 years, more than 70 full-scale industrial research and development projects have been initiated between the two countries, involving more than 120 companies.

On renewable energy, both Canada and Israel will develop further cooperation in this area and seize opportunities to leverage current science and technology partnership activities in order to benefit from each other’s expertise.

According to figures from the World Energy Council, the 240-square kilometre Shfela Basin near Jerusalem may be the site of up to 250 billion barrels of shale oil. If the figure is close to being accurate, it would firmly put Israel in third spot behind only the U.S. and China in terms of shale oil. A major knock on shale oil mining extraction is that it’s both an energy and water intensive process and is often tagged as ‘dirty’ by environmental lobbyists. It’s also believed Israel may have ownership rights to about 15 trillion cubic feet of unconventional natural gas deposits offshore.

Notably, a 1997 free trade agreement between Canada and Israel excluded areas such as financial services investment and there’s no indication that’s going to change based on this current agreement.