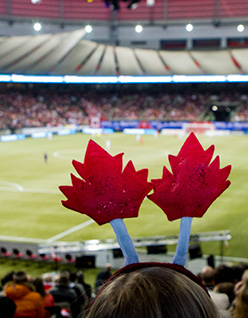 If there had been any doubt as to the sport’s popularity in Canada, the game erased them all, and symbolized the appeal and draw of the beautiful game in Canada.

Although the Canadian Soccer Association (Canada Soccer) is celebrating its 100th anniversary this year, the game’s presence has exponentially escalated in the last 10, even five, years. Canada Soccer is the official governing body for soccer in Canada. In partnership with its members, Canada Soccer promotes the growth and development of soccer in Canada, from grassroots to high performance, and on a national scale.

According to Peter Montopoli, General Secretary for the Canadian Soccer Association, things are just getting started. “2012 is the year of momentum for Canadian soccer as a whole,” he says, citing world class events hosted by the country.

“We already hosted, in January, the CONCACAF Women’s Olympic Qualifying tournament, which set attendance records and sold out BC Place,” he continues, where Canada’s Women’s National Soccer Team qualified as one of 12 teams that will proudly compete in the London Summer Games.

With such a bright future for the sport, Canada Soccer pays special homage to its roots. To commemorate the 100th anniversary, Canada Soccer is presenting a special centennial match on June 3 at BMO field, Toronto, pitting Canada against the United States, a replica of the first match between the two countries played in 1926.

Of course, there was the Toronto FC game with Beckham, whose presence brings an enormous amount of publicity and excitement, not only in Canada, but North America. Then there was the MLS Montreal Impact playing their March home opener in front of 60,000 fans in Olympic Stadium.

Having expanded into Canada in 2007, MLS has created a massive footprint on the sporting psyche of Canadians, quickly taking more and more attention of sports lovers for its speed, excitement and player calibre. Backed by an extensive, six-year media contract with TSN, and MLS is a major addition professional sport in this country.

Montopoli acknowledges 2007 (when Canada hosted the FIFA U-20 World Cup) as an important year for the sport in this country, calling it “the jumping off point.”

“We set FIFA attendance records with 1.2 million people coming through the gates, which I think surprised a lot of people in our country.”

“Part of that success in 2007 brought professional soccer into Canada and following that now based on the success FIFA has awarded us the FIFA Women’s World Cup 2015 which will bring a watershed moment in Canada in terms of a size and scale of the competition, with 24 countries competing and simultaneous games being held from coast to coast.”

Despite its wildly popular professional and national teams, it’s on the amateur level that soccer is most successful.

Soccer is the No. 1 participation sport in Canada and the fastest growing sport in the country, says Montopoli, with an average 44 per cent of youth (under 18) participating in the sport across the provinces in 2011, or about 850,000 within 1,500 clubs across 144 districts that operate in 12 provincial/territorial member associations.

It is estimated that within the next two to three years, the number of registered soccer players in Canada will reach over 1 million.

Montopoli cites the popularity of the sport in other countries as a springboard for the sport’s success here, especially amongst new Canadians. “When new Canadians come to Canada one of their chosen activities is to participate in the sport of choice of their home country,” he says.

With the gains made in soccer in recent years, the Canadian Soccer Association has set its sights even farther. “We still have many goals ahead of us, such as reaching 1 million participants, the qualification of our men’s team for the FIFA World Cup, get a medal at the FIFA Women’s World Cup 2015 event and continue significant investment in our youth development program in order to ensure our two senior teams perform at peak performance on a world scale.”

With that, Canada Soccer is working to increase its budget to $25 million (from the current $19 million) to achieve these results.

“We have tried to do three things and do them well. Play at home, win at home, and put it on TV,” says Montopoli. “That’s our hat trick!”