Rogers 5G network, powered by Ericsson, now in Regina and Saskatoon; will expand to over 60 Canadian markets by year-end
Expansion will support additional 5G devices launching this fall on Rogers Infinite plans and unlimited business wireless plans; over two million Canadians now on Rogers Infinite plansNext generation 5G network technology will drive productivity, fuel innovation and power Canada’s economy to compete globallySASKATOON, Saskatchewan, Sept. 01, 2020 (GLOBE NEWSWIRE) — Rogers Communications today announced 5G is now available on Canada’s most trusted and reliable network in the Saskatchewan cities of Regina and Saskatoon1. Including these markets, Rogers 5G network, powered by Ericsson, launched in over 50 new cities and towns in Canada today and will reach a total of more than 60 markets by year-end.“5G technology will transform the way we live, work, and do business in Saskatchewan,” said Larry Goerzen, President of Alberta and Prairies, Rogers Communications. “By offering the most transformative technology to residents of Regina and Saskatoon, we are laying the foundation to shape entire industries and support Saskatchewan’s economy. Strong digital infrastructure and this next generation technology are critical to fuel productivity and innovation as we power out of the pandemic, and in the future as we reset the competitive landscape in Saskatchewan and for Canada, globally.”Today’s announcement builds on the company’s January roll out of 5G in downtown Vancouver, Toronto, Ottawa and Montreal and makes Rogers 5G network the largest in Canada2. Expected to be the most transformative technology since wireless services were introduced in 1985, 5G will make real-time connectivity a reality, accelerating the transition to a truly digitally connected world.Rogers 5G is currently accessible to customers on Rogers Infinite plans and unlimited business wireless plans with select 5G-ready devices. More than two million Canadians are now on Rogers Infinite unlimited data plans, representing the most customers of any wireless provider in Canada with no overage fees. Customers can purchase new devices at $0 and 0% interest with device financing.Over time, 5G will introduce new capabilities that are significantly more advanced than previous generations of wireless technology. With ultra-low latency, the lag between sending a request and the network responding will theoretically drop to one millisecond, 400 times faster than the blink of an eye. This will allow for a massive increase in the number of connected devices and a range of capabilities and applications that require quick responsiveness. From network slicing to give first responders a dedicated network, to wireless sensors that monitor farmers’ soil conditions saving them time and money, to using virtual reality that enhances the retail customer experience, to multi-player lag-free gaming on the go – 5G will deliver a world of possibilities.Wireless industry investments in 5G networks are expected to contribute an estimated $40 billion to the country’s economy and 250,000 permanent new jobs by 2026. In Saskatchewan alone, the industry has the potential to increase GDP by $1.2 billion due to increased broadband penetration3.Rogers has invested over $30 billion over the past 35 years to build Canada’s most trusted and reliable wireless network. In 2020, the company was awarded the best wireless network in Canada for the second year in a row by umlaut, the global leader in mobile network testing and benchmarking.  Rogers was also ranked number one in the West and Ontario Regions in the J.D. Power 2020 Canada Wireless Network Quality Study.
CBJ Newsmakers 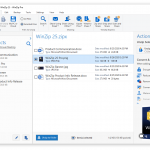