Since 1982, the Canadian Council for Aboriginal Business (CCAB) has been the leading voice and the backbone for creating improved relationships between mainstream corporate businesses and the Indigenous communities. The CCAB has also managed to achieve tremendous success in improving the economic self-reliance of Indigenous communities while assisting corporate business.

The Canadian Business Journal recently spoke with CCAB President and CEO JP Gladu about the importance the organization has had for more than 36 years after being launched by entrepreneur Marty Koffler, the founder of Shoppers Drug Mart and co-founder of The Four Seasons Hotel and Resorts.

During his travels Koffler witnessed first-hand the deplorable living conditions for many people within the Indigenous community and immediately began to seek a solution. He challenged the government to do something and took it upon himself to call upon some of his more influential friends, including the likes of Paul Martin and Edward Bronfman, to show support for the organization.

“A lot of the initial programming was based on internships, helping business people and finding employment for those in the community,” says Gladu, who took the helm at the CCAB in September, 2012. Upon his arrival there were seven staff and 180 members with a few core programs. After six years under Gladu’s leadership there are now 25 people on staff, 675 members with substantial gains in program offerings and research.

Gladu completed a forestry technician diploma in 1993, obtained an undergraduate degree in forestry from Northern Arizona University in 2000, and he holds an Executive MBA from Queens University and the ICD.D from Rotman School of Management at the University of Toronto.

When the opportunity arose to join the CCAB Gladu was already quite familiar with the organization and had attended a number of events, so he was well prepared for what the job of president and CEO would entail.

As Canada’s first entrepreneurs during the fur trade Indigenous peoples are innately entrepreneurs. Now, in the modern era he sees two fundamental aspects that need to shift within the Indigenous community: education and economy.

“If we can get those two things right we can shift the outcomes in a significant way to start pointing those socio-economic indicators that are currently pointing in the wrong direction and get them pointed in the right direction,” he says.

In dealing with Indigenous and non-Indigenous leaders as well as government for the last few years, it’s incredibly rewarding work for Gladu, who still calls it his dream job. He acknowledges there is still a lot of work to be done, but with a strong team around him, he’s got every bit as much passion and enthusiasm as he did when he started more than six years ago.

“When I do 50 speaking engagements a year, trying to change the narrative in this country and getting a place at the business table is inspiring to me.”

One of Gladu’s predecessors created the first ever and still the only existing corporate social responsibility certification program for Indigenous business called PAR – Progressive Aboriginal Relations – and it’s been in existence for 17 years.

Seven years ago the CCAB had 14 participating companies and today there more than six times that amount. Of note, a very high percentage is non-Indigenous led companies. It’s an outstanding framework to improve upon Indigenous relationships regarding key focal points such as procurement, employment, engagement and investment.

“That was a really big win for the organization because it put us on the map to give us something to work towards to advance the relationships,” notes Gladu.

About two years ago the CCAB started a program called Tools and Financing for Aboriginal Business (TFAB), which supports entrepreneurs in their startup and growth. There is also the Certified Aboriginal Business, where the CCAB certifies Aboriginal business to ensure that they are in fact majority owned and controlled.

“Probably one of our biggest wins to date is our Aboriginal Procurement Champions’ work. Mark Little is the Chief Operating Officer for Suncor and he’s my co-chair. We have more than 40 of Canada’s largest companies, both Indigenous and non-Indigenous, opening up their supply chains to increase the number of Aboriginal businesses that are successful in procurement opportunities,” explains Gladu.

“We’re seeing the impact of the work that we do on government and private sector and it really does encapsulate everything we do as an organization,” he continues.

In terms of changing the business narrative, Gladu believes they have reached the midpoint and a bit beyond, but improvement in relations still has a long way to go. As a positive example, he cites the Trans Mountain pipeline. While the project itself is controversial in some circles, it is a clear sign that future partnerships are definitely burgeoning.

An increased number of Indigenous people are now sitting on the boards of some of Canada’s largest corporations. Chief Darcy Bear of the Whitecap Dakota First Nation is currently the chair at SaskPower while Gladu sits on Ontario Power Generation’s board and he’s also the chancellor at St. Paul’s University College at the University of Waterloo. Toronto lawyer Cherie Brant was recently appointed to the board at Hydro One and a number of other Indigenous business leaders are getting appointed to these large corporations because they understand the importance of engaging and having a voice.

Based on statistics from 2016, the Indigenous community as a whole contributes $32 billion annually to the Canadian economy. The CCAB is struggling to keep up with the demands from industry and governments as the organization continues to grow. In just the last year alone, the CCAB has grown its membership by 23%. Additionally, the federal government has appointed a board for the Trans Mountain pipeline and two people on that board are Indigenous.

“A lot of the early interactions between the Indigenous and non-Indigenous business communities have been around the natural resources sector because we’re situated all along these areas. But now we’re starting to see companies like Rogers, Apple and Air Canada who see the importance in engaging with the Indigenous population,” mentions Gladu.

A great deal of collaboration is being conducted between CCAB and various governments as a means of enhancing the working relationship between the Indigenous and non-Indigenous business communities. Gladu and his team are currently working with six different federal departments and his senior team engages with those government officials on a regular basis.

In 2016 the economic impact of Aboriginal business in Canada was $12 billion and $32 billion when household income is taken into account. However, the figure represents just 1.5% of the entire GDP. It’s a percentage that the CCAB is fervently aiming to improve upon.

“We are advocating to government and industry to target 5% of their total spend – which is representative of the size of our communities in terms of overall population. That will close the gap and get us to the $100 billion economy where we need to be in line with our population.

“We must get stronger on procurement. We are a growing force and will continue to move forward,” says Gladu.

The CCAB has 15 annual events that draw a great interest from the public and generate an essential source of revenue. Event sponsorship is a vital contributor to daily operations, which enable the organization to continue delivering quality programs and services while promoting knowledge sharing as a means of developing further mutual understanding between Canadian businesses and Aboriginal entrepreneurs and communities.

The galas typically attract about 500 business leaders from across the country and are dispersed geographically to give benefit to each region in the country.

“Our economic development conference, which is going into its fourth year this May, is really picking up steam. We had close to 300 participants last May and I expect that number to grow,” Gladu proudly says.

The CCAB also has an incredible awards’ program and the Aboriginal Hall of Fame, which includes an annual lifetime achiever award and an Indigenous youth entrepreneur. The award for excellence is open to any Canadian; former Prime Minister Paul Martin was the inaugural winner.

The galas are held in Toronto at the end of January; Calgary at the end of May; and Vancouver in September. The presentation of the awards is one of the highlights of the gala events. Those awards include: the Aboriginal Business Hall of Fame (ABHF) Lifetime Achievement Award, the National Aboriginal Youth Entrepreneur Award, the Aboriginal Economic Development Corporation Award; the Award for Excellence in Aboriginal Relations and the Indigenous Women in Leadership (IWIL) Award, which was just given out for the first time with the inaugural recipient being Justice Minister Jody Wilson-Raybould, a Kwakwaka’wakw Canadian.

It is Gladu’s belief that the CCAB needs to showcase Indigenous success not only within their own communities but also to the broader Canadian public to make it known that Indigenous people are strong contributors to the economy.

Considerable inroads have been achieved to help bridge the gap between Canadian business and Indigenous communities looking to expand upon an economic development base, but challenges remain.

“Our members have told us that getting access to capital is one of the biggest barriers to their success,” confirms Gladu. “Access to good business service tools is also important. Our response to that was developing the Tools and Financing for Aboriginal Business (TFAB) program.”

History has shown that when given the opportunity of empowerment, Indigenous businesses are often the best employers of Aboriginal peoples because they understand the cultural nuances. For that reason alone, accessing the mainstream business supply chain is critical. As the old saying goes, you can have the best product, but if nobody knows about it and you cannot get it to the market, then success will be nearly, if not entirely, impossible.

About 18 months ago the CCAB and a partner association conducted research about what non-Indigenous Canadians think about procurement for Aboriginal businesses. Eight out of every 10 respondents said corporations and the government need to be stronger proponents of procuring Aboriginal businesses. Gladu sees it as a positive path to economic reconciliation towards strengthening the country.

“The emphasis for us is about procurement and the supply chain and getting the government to set a 5% target. Right now the government spends 0.3% of the $22 billion, which is about $65 million a year. If they were to increase that to a 5% target that would increase their spend to $1 billion,” he reveals.

“We have some companies like Suncor that are closing in on 5%. They spend $17 billion a year and this year they are expected to hit a $650 million spend on Aboriginal businesses, which is having a huge impact on socio-economic incomes,” continues Gladu.

A key to success for the CCAB will be to continue to drive value for its nearly 700 members. As example, the Certified Aboriginal Business program can get people in front of a growing procurement space. The government has set a target of 5% after three years. The bar is now at 3%, which means another 1% growth per year over the next two years. There is also an internal ‘Drive for Five’ plan within the organization, and the CCAB is currently still on track to achieve.

“If we look at the ‘Drive for Five’ by Year Three I’m hoping that we’re going to be between 2,500 and 3,000 members. I want to see at least 150 procurement champions opening up their supply chains to our Aboriginal businesses. Right now we have 42 procurement companies,” states Gladu.

There is no doubt that society sees the inherent value of the CCAB with all its programs, services, research and networking.

“There is still work to be done. There are perceptions of who we are and our business acumen, which isn’t necessarily favorable in the eyes of some Canadians,” notes Gladu. “The CCAB is a positive voice for change.”

Indigenous business is thriving and ready. 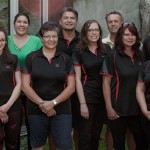