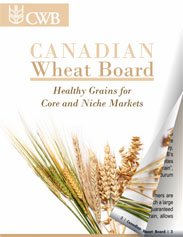 With more than a decade as a farmer-controlled grain marketing body under its belt, the Canadian Wheat Board continues its long and proud history of bringing Western Canada’s best grains to the world. There are roughly 70,000 grain farmers in western Canada, 50,000-60,000 of whom are growing wheat to be sold to the CWB in any given year. Based out of Winnipeg, the CWB has a 20 per cent share of the international market and sells more wheat and barley than any other single marketer in the world, though it does not retain any revenue or make any profits from the grain it sells. Maureen Fitzhenry, the CWB’s Media Relations Manager, says the CWB hopes to export record amounts of grain this year. “We’re expecting this year to export 1.4 million tons of malting barley, in bulk,” says Fitzhenry.