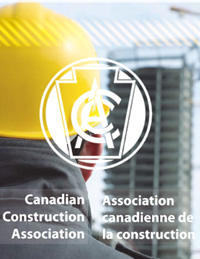 The Voice of Canada’s Largest Industry

The Canadian Construction Association (CCA) is a volunteer, not-for-profit organization that represents the national and international interests of the Canadian construction industry. Working to raise awareness and improve conditions, the CCA has used its collective strength to address industry relationships and practices, standards for business ethics, education and labour matters.

Founded in 1918 the CCA now has 20,000 members who either own or work for construction companies. Members come from a variety of sectors, including general contractors, trade contractors, road builders, design-builders, insurance and finance companies—everything but single-family home builders.

The Canadian construction industry is enormous, representing about six per cent of our Gross Domestic Product and employing roughly 1.1 million people.
How does CCA manage to represent the interests of that many workers?

According to Michael Atkinson, CCA President, the association “spends a lot of time lobbying with the federal government, national organizations and other industries that we work with.”

Good news
As a part of the recent economic stimulus package, the government is allotting $9.5 billion over the next two years to build and repair Canadian infrastructure. This news couldn’t be any sweeter to the CCA. Not only will the budget employ thousands of Canadians that find themselves without jobs, it will also ensure that some long-overdue work will get done.

“As far as priorities go, the CCA is pretty happy with the federal decision,” says Atkinson. “We’ve been on them for years now, saying that our key strategic public infrastructure is falling apart. As a result of that neglect, the infrastructure doesn’t work for Canadians, it works against us.”

“Some groups say that Canada has ignored infrastructure so much that our infrastructure deficit is as high as $200 billion and growing by $6 billion every year,” he continues. “Needless to say, we’re very excited to see the federal government is starting to address that. The CCA is doing what we can to make sure the new projects are progressing quickly.”

Now that infrastructure is getting this degree of attention, the CCA hopes the government continues to prioritize it once the economy starts turning around. Investing in infrastructure shouldn’t be just about creating jobs in the present. “This is an investment into Canada’s future,” says Atkinson.

Industry priorities
The stimulus package was a definite highlight for the CCA, but there are still more fish to fry. Like most trades industries in Canada, one of the main priorities in construction is the aging work force that will need replacing in a few years time. The Construction Sector Council has said that by 2015, if the industry doesn’t do any better in recruiting, it will have to find more than a quarter million new people just to replace retirees and to keep up with regular demand. This reality represents a real challenge for the CCA for at least three reasons, and those reasons have become new platforms for more lobbying. The CCA has a number of policy solutions and proposals in place to address each obstacle.

First, the CCA needs to send a message to Canadian youth that working in construction is a rewarding and profitable career. Local associations are doing a great job by going into junior highs to talk to youth, as well as trying to get parents on board. But Atkinson explains that more effort needs to be put into reaching youth from traditionally underrepresented groups in our industry, including women and aboriginals.

The second—and most challenging—goal is amending the Canadian immigration policy. There are plenty of immigrants who could be valuable to the industry, but as it stands, the immigration process is not conducive to bringing in skilled tradespeople.

“The Canadian immigration test is geared to how well one does on the point system,” explains Atkinson, “but most of the points are given for how many university degrees you have, or your proficiency in English or French. Not enough points are awarded for high-demand skills or decades of trade experience. It’s easier to get in the country if you have a degree in Greek Mythology than if you are an experienced welder. Ironically, once our educated immigrants are granted residency, their credentials don’t transfer. Canadian industries are saying that we need to have a more strategic system to be more proactive. We want to create a labour base that will respond to the needs in industry.”

The third goal to rally more skilled construction workers is to improve the state of community colleges across the country. While the association is pleased with the government’s action in the federal budget to repair and expand college institutions, the CCA wants to ensure they are true to their word.

“We get a lot of our construction workers from colleges—supervisors, project managers and the tradespeople themselves,” says Atkinson. “Our colleges are in a sorry state of disrepair. They were built 40 years ago and haven’t been addressed since. They don’t have the space, equipment or faculty to train new workers that we need.”

Atkinson goes on to explain that Red River College in Manitoba, for example, has a three-year waiting list of students who want to get into the carpentry course. “Our concern is that if we’re successful in attracting people to the industry, the colleges won’t have capacity to process these students,” he says.

It’s not just the construction industry that has these concerns—paramedics, lab technicians and auto mechanics are facing the same issues. Aside from the work needed on college infrastructure, skilled trades in general need more attention to correct the severe shortage in skilled labour.

In 2006, the Canadian Federation of Independent Business (CFIB) did a survey, discovering that within the next decade, Canada’s future workforce will require six college graduates for every one university graduate.

Gold Seal
The CCA doesn’t just lobby for other organizations to improve the conditions in the construction industry. Sometimes, you have to take matters into your own hands. That’s why the CCA developed its own Gold Seal Program, a national certification program for construction project managers, superintendents, estimators and owners’ project managers.

Certification is based on the candidate’s education, experience and their ability to satisfy the rigorous standards of the program, recognizing pursuit of excellence in construction management occupations.

“It’s based on 3 E’s:” says Atkinson, “experience, education and examination. Individuals can get the gold seal certificate after at least three years of experience in their occupations, a certain number of hours in industry courses and the national exam. It’s a great program because our industry is becoming a lot more technical and complex. We want to promote professional development courses for experienced workers to stay on top of industry trends.”

Looking ahead
The Canadian Construction Association will always have something on the go because there is always room for improvement. For now, they are focused on issues such as immigration reform, labour mobility and environmental initiatives.

The association is seeing progress in government’s decisions, but they know how important it is to stay on top of things. “Even though infrastructure is in the spotlight now, the government could eventually go back to their old way, which has been design-build and forget,” says Atkinson. “That would be a grave mistake. The $200 billion deficit is significant and we can’t ignore aging infrastructure. It’s not good for Canadian citizens.”

The up-hill battle continues, but the CCA is committed to keep pushing for better and better.