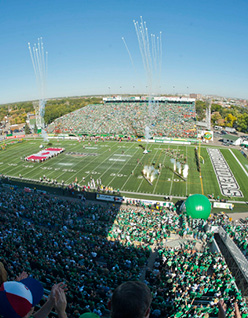 Mark Cohon was named Commissioner of the Canadian Football League (CFL) in 2007. Under his direction, the CFL has realized a renaissance, reaching strong television ratings, a growing licensing business, and record sponsorship numbers. Game attendance has also increased under Cohon.

An eight-team league, the CFL has recently experienced several clubs undergo major stadium renovations and new stadium projects, from the Saskatchewan Roughriders new stadium, targeted for play in 2017, to the BC Lions’ renovated BC Place, to the return of a CFL franchise in Ottawa. The many league-wide stadium developments account for more than $1 billion in Canadian infrastructure projects.

“When you look at infrastructure, I can’t think of another professional sports league in terms of the percentage of teams that are going through stadium projects,” Cohon said in an interview with The Canadian Business Journal. “This is for the next generation and the generation after that.”

Back to the Nation’s Capital

The CFL has a history in Ottawa. The Ottawa Rough Riders called the Canadian capital home for more than a decade until 1996. From 2002 to 2005, the Ottawa Renegades were the second coming of football in the city. The third time is the charm with the hope that a new team will return as soon as possible.

“I’m confident that it’s a recipe for success,” Cohon commented on the return to Ottawa. “Primarily it starts with ownership. When we said we wanted to get back to the nation’s capital, we said we had to have local business and community leaders who get behind this project.”

Jeff Hunt, owner of the Ontario Hockey League’s Ottawa 67’s, is a recognized community leader who has led the CFL’s return to Ottawa. It’s anticipated that the new franchise will play at the Frank Clair Stadium of Lansdowne Park following a redevelopment project valued at about $500 million.

This November, the City of Toronto and the Rogers Centre will host the Grey Cup. Significant to this national and iconic event is that it is the 100th Grey Cup.

Toronto was also the host city of the inaugural Grey Cup. Proven popular, tickets to this year’s game were sold out six months in advance.

“From an economics standpoint, it’s great for Toronto and for the province. We believe this year’s Grey Cup will generate between $100 million and $120 million in economic activity for the city and the region,” Cohon said. “Being the 100th Grey Cup, it’s also a great opportunity for the league in terms of adding new sponsors, improving our licensing business, driving sales of season tickets, and helping with our ratings, which is exciting.”

In terms of television ratings, sports viewership of the CFL ranks second in Canada, behind only National Hockey League ratings. On average, more than 700,000 viewers tune in to each CFL game, representing a five per cent increase this year, and a jump of over 50 per cent among male viewers aged 18 to 34.

Often competing for fans eyes and dollars with the American-based National Football League (NFL), the CFL has committed to two avenues in attracting new players and fans to Canadian football. At the high-end level, the CFL works alongside TSN, its official broadcaster and major media partner, to draw greater interest in the game. The results are evident – since partnering with TSN in 2007, CFL viewership has more than doubled, while the league believes opportunities remain for further audience growth as well.

“What we’re finding is that if you’re a football fan, there is a lot of crossover. We believe that 50 to 60 per cent of our fans are also fans of the NFL,” Cohon detailed. “The way the majority of football fans watch and follow the game has to do with television.”

Additionally, at the grassroots level, the CFL and its member clubs invest in minor football programs, focusing on the importance of young players involved in the game. The CFL believes these initiatives ultimately create a sense of community and build a younger audience for Canadian football. Playing an active role in its communities, the CFL and its players are also noted for players in public appearances, with teams averaging 700 player appearances each season.

“Our players are in the community talking to kids about football, about anti-bullying programs, and what it means to stay in school,” Cohon explained. “These initiatives help build the communities around our football clubs. We have then augmented that with a lot of social media initiatives. I think that’s why you’re seeing our growing success.”

This dual approach with large corporate partners and success at the grassroots level is something that the CFL looks to continue in the future.

“We’re really exciting with the progress we have made over the last five to six years. As we move from city to city, building upon the successes that we have had, all of this will help us in attracting the next generation of fans,” Cohon concluded. “Over the next few years, our big projects involve a renewal of our TV agreement, the renegotiation of a strong Collective Bargaining Agreement, the opening of brand new stadiums, and continued sold out national Grey Cup championships.”