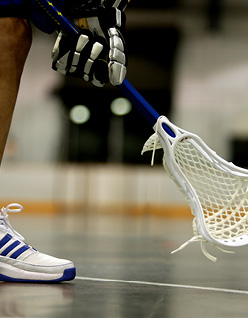 Our Country, Our Game

North America’s oldest sport has its origins in Native American cultures. With records of the game dating back to as early as 1,100 AD, the game was played on a much larger scale than today, with teams ranging from 100 to 1,000 players on fields as long as three kilometres and lasting for days.

To native Canadians, the game had a spritiual component and was used as a display of combative spirit. It victors brought honour and glory to their team and tribe, which was always dedicated to “the creator”, which is how it got its original name “The Creator’s Game”.

The game took on wider popularity in the middle 17th century, when settling French Jesuits observed the game and took interest. Its contemporary name ‘lacrosse’ is said to have come from Jean de Brebeug, a priest who likened the stick the crosier, a staff carried by bishops. The game became codified in 1867 to become closer to the game we recognize today, with a shortened standardized field and 12 players per team.

Despite this storied history, lacrosse’s popularity waned slightly in the 20th century in Canada, being surpassed by hockey and soccer in terms of player participation. Once an Olympic sport, it lost that designation in 1908, as it did in the Canada Games in the 1970s. That trend is now reversing itself, and the Canadian Lacrosse Association (CLA) is finding the sport becoming more popular amongst players ages five to 18.

With the National Lacrosse League having three professional teams in Canada, even more fans are able to watch the fast-paced sport performed at a high level. With games drawing 10,000 fans on any given day, it has given the sport an unquestionable boost in popularity, something which the CLA lauds.

Joey Harris is President of the CLA. His mandate is to implement the CLA’s strategic framework in the next four years to increase the sport’s profile on a national level, and “to honour the sport of lacrosse and its unique nation-building heritage, by engaging our members, leading our partners and providing opportunities for all Canadians to participate.”

The foundation to the CLA’s strategy is a grassroots approach to introducing the sport to as many Canadians as possible — no small feat in a country where most communities outside the big city centres are spread far apart and have small populations. If this plan is implemented properly, the first end goal is participating in the Canada Games, and then to ensure consistent national championships.

“Enhanced participation, excellence, interaction, and capacity” are the four key focuses of the strategy, says Harris. “In order for us to grow the sport of lacrosse, we want to expand in all regions and disciplines. We want to make lacrosse accessible to everyone — one of our key focuses is a version of lacrosse for disabled athletes (like wheelchair or sledge lacrosse) as well.”

The CLA has created two Atlantic Coordinator positions to create inlands into the Atlantic provinces where the game’s profile was almost extinct five years ago.

Bruce McCullogh is the Atlantic Coordinator for Nova Scotia and Newfoundland and Labrador, as well as the Regional Director, Tri-Country/South Shore for Lacrosse Nova Scotia. His job is to physically introduce lacrosse to students who might otherwise be unfamiliar with the sport. McCullogh’s biggest obstacle is the rural demographic of the island.

“We have small communities well spread out. It’s hard to create an association that can play within itself, so my goal is to have an interlocking regional schedule in the next two to three years,” says McCullogh.

With most of the lacrosse activity centred around Halifax, Dartmouth, and Truro, the CLA is trying to expand the game’s participation in rural areas, reinforced by Lacrosse Nova Scotia.

“We promote a day where we have children come to an arena or gymnasium and go through the basics of the game with them and generate the interest. Recently, a two-day clinic was held at Digby Elementary School where 17 physical educational classes of 350 to 400 students were introduced to the basics of the game. Those two days were followed by a trial lacrosse clinic at the Digby arena.”

Continually meeting with community recreational departments and school boards, McCullogh has introduced the sport to hundreds of school aged children this year. “We are trying to get the LacrosseFITS — a comprehensive training strategy program into the elementary schools in the province. LacrosseFITS is a program made up of a series of modules that anybody can take, whether you have lacrosse experience or not, to learn the game, and then go teach it to children in a school or in the community.”

This exposure to lacrosse at an early age will ensure Canada continues its legacy as a globally revered leader in the sport, and continue to be recognized as the breeding ground for the sport’s best players and global ambassadors. It is no coincidence that Canada’s players are being recognized for their skills and each year more and more are attending universities in the U.S. and Canada.

According to Harris, an evolving governance structure and understanding of the country’s demographics are key to improving future competitions and, at the same time, protecting the heritage of the sport. The CLA is preserving our country’s national sport by improving the image of lacrosse and raising the profile of its brand. The long-term objective of the CLA is to keep lacrosse at the forefront of the national sporting psyche and develop on its unparalleled history with this nation.