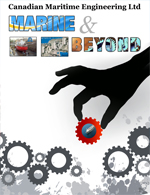 Although Canadian Maritime Engineering (CME) first started as a local Nova Scotian marine repair company, it has grown to become a nationwide, heavy industrial service and repair facility, with offerings for more industries than just marine.

If you ask Tony Kennedy, President of CME, he never imagined the company to become so diversified. He says they had a much smaller vision to begin with, but 28 years later, he’s very excited about how far they’ve come, and—more importantly—where they are going.

“CME has a number of employees across the country,” says Kennedy. “There are about 130 on the east coast, working out of two plant locations; 30 to 40 in the central area; and on the west coast; and it’s anywhere from 30 to 150 people depending on our projects. CME takes pride in its best asset, which is its staff, many of whom have worked with the company for well over 20 years.”

Along with its diverse locations come diverse industries, such as oil and gas, mining, military, power generation and process industries. Having said that, CME has not forgotten about the marine industry; it remains a solid part of the business. CME is still an industry leader in repair and maintenance of coastal and ocean going vessels. In fact, CME has earned the business of organizations like the Canadian Navy, Canadian Coast Guard, and various other marine clients with offshore supply vessels, container ships, passenger vessels, bulk carriers, self-unloading vessels and fishery vessels.

Globetrotting
Leading your industry often means being in high-demand around the world—CME is no different. They have had the opportunity to work in remote areas of the globe, packing up and sending teams to help clients with whatever they need. Fortunately for CME, they are mobile.

“We can work anywhere in the world,” beams Kennedy. “We have containerised equipment that we can take on ships or on airplanes, making it very easy to do our job wherever we’re called. We’ve worked in Venezuela, South Africa, Mexico, the United States and we’ve done remote jobs up north.”

Fully equipped workstations can be mobilized very quickly. These workstations can be powered from the customer’s site or by backup generator for remote work sites. With said services, CME can respond anywhere to get equipment back in service and reduce down time.

If you ask Kennedy, it’s the northern projects that he is especially fond of, particularly the one in the Northwest Territories.

“We sent a crew up there to re-power a ferry that operates on the Arctic Red River outside Inuvik,” he recalls. “The vessel can’t move out of the river system. In the winter, the community pulls it up on the bank because the river freezes and becomes a road way. In May, once the ice melts, they push it back in. We were there last year to put new engines in the ferry. The vessel has been operating successfully ever since, which was important because it’s a crucial part of their transportation system.”

“It was a unique project,” Kennedy continues, “and there are few companies that could have done it the way we did. We had to go in during the winter, bringing all of our equipment with us. We only had a certain window of opportunity to complete the project. It was difficult to work in those elements, with temperatures dipping to minus 72 Fahrenheit, with wind chill. When we cut the steel on the ferry we had to preheat it first, so we could weld it—otherwise it would have cracked due to the extreme cold. We had to use special welding procedures to make sure it passed the certification process. Many other obstacles had to be overcome to complete on time and make the project a success.”

Doing their part
One of the areas the CME has branched out into is renewable energy, that is, energy generated by resources that are naturally and quickly replenished. The company recognises the value of renewable energy in a few ways. Not only does it give CME an opportunity to do its part to help protect global resources, but the green power industry is becoming a larger and increasingly active market.

In today’s world, it’s good business to have an environmentally sustainable offering, and when it’s something as useful and challenging as renewable energy, there’s no reason why CME shouldn’t be jumping in with both feet.

“We are looking primarily at wind power and hydro power, as well as wave power opportunities,” explains Kennedy. “We’re aligning ourselves with the renewable energy industry in order to be considered an up and coming contractor. We have the heavy machining and manufacturing capabilities, as well as the R&D component.”

CME is getting into the wind power industry at the right time. While it still represents only 1.5 per cent of worldwide electricity use, the number is growing rapidly, having doubled in from 2005 to 2008. Just last year, the Canadian Wind Energy Association outlined a future strategy for wind energy to reach a capacity of 55,000 megawatts by 2025, fulfilling 20 per cent of Canada’s energy needs. The plan, Wind Vision 2025, could make the country a major player in the wind power, saving an estimated 17 mega-tonnes of greenhouse gas emissions annually.

Aside from the power generation side of sustainability, CME relies on its R&D division to keep an eye out for best environmental practices in all areas of the business. “CME is always looking for ways to help our clients leave a smaller carbon footprint,” says Kennedy, “whether it’s with new equipment or with improvements to existing machinery.”

What’s next?
In the future, Kennedy sees more product line expansion into the protective coatings market. These industrial coatings would be most commonly used for corrosion control of steel or concrete. One of the coatings that CME is interesting in exploring is Teflon, a substance with non-reactive properties. Teflon is ideal for pipe work that contains reactive and corrosive chemicals.

“We see a future market for special coatings to protect components, as opposed to using higher cost metals such as stainless steel,” says Kennedy. “These new coatings can extend the life of components and equipment, offering more value to the client. Right now, we’re getting involved in a lot of specialty high-end coatings for military and the power industry and working with our customers to provide value added solutions.”