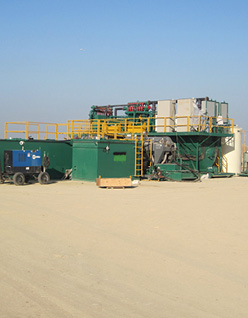 Canadian Oil Recovery & Remediation Enterprises Ltd. (“CORRE”) is already uniquely positioned ahead of the pack amid Kuwait’s emerging oil environmental services and recovery opportunities, and it won’t be long before the team takes its next step towards becoming a long-term fixture across the upstream and downstream MENA industries.

The global market for environmental services is estimated at US$640 billion, and it is poised to grow yearly at a rate of seven to 10 per cent. The MENA region is integral to these international totals and growth projections. This vast region is equipped with established hydrocarbon provinces, and while it represents a market worth an estimated $96 billion, it is also set to grow at a rate estimated at 10 per cent per annum. Opportunities in oil recovery, soil remediation and waste management continue to offer huge potential for the right experienced, commercially competitive and established groups (not to mention their investors) and Canadian Oil Recovery & Remediation Enterprises Ltd. (“CORRE”) (TSX.V: CVR) (OTCQX: CRVYF) is capable of delivering on all service fronts.

Headquartered in Toronto, CORRE is focused on the MENA upstream and downstream markets, and is the brains behind the Advanced Recovery Equipments Systems (“ARES”) platform of services and operating equipment facilities. These platforms are each based on proven technologies and innovative operating processes, enabling CORRE to become a leading total oil waste management service company.

CORRE’s strategic operating partnerships with multinational oil service groups have placed the company in a unique position. Through its SAR-CORRE MENA (“SCM”) partnership with Norwegian oil waste management operating company SAR AS (“SAR”), CORRE is one of a handful of firms that are pre-qualified with Kuwait Oil Company (“KOC”) for three distinct service lines (soil remediation, waste management, drill cuttings treatment) and was recently invited by KOC to bid on near-term soil remediation and oil recovery contracts (the “SEED Contracts”). These SEED Contracts are worth in excess of $210 million and KOC will announce the winner of the contracts by the end of the year. In addition to securing a leading bidding position in this charge, CORRE maintains a long-term commitment to offer its range of proven, fully-commercialised and highly desirable technology to the wider ambit of industry opportunities emerging in the region.

The SAR-CORRE MENA (“SCM”) operating partnership marks a sublime meeting of minds on both corporate and operational fronts. Through this pairing, CORRE is one of only 12 groups eligible and actively bidding on the three SEED Contracts which are based on soil remediation and oil recovery. CORRE’s ARES platform, which offers viable remediation techniques suitable for a range of projects and through the company’s strategic operating partnerships, is capable of providing solutions for the SEED contracts as well as future contracts for waste management and drill cuttings treatment.

“The value in having this position in Kuwait is important because we can leverage that standing into other countries, including Saudi Arabia,” CORRE’s chief financial officer, Alex Gress, told the Wall Street Reporter (WSR) in an October interview.

“Kuwait is increasing its oil production to over 4 million barrels per day over the next couple of years. This represents seven per cent of the world’s oil reserves. Secondly, Saudi Arabia has immense production, as the Kingdom holds 18 per cent of the world’s oil reserves. Each region represents growing markets and requires long-term solutions that have a need for total oil waste management providers,” he explained.

The first phase of the soil remediation SEED Contracts encompasses approximately 50-60 of the approximate 6,000 oil pits on KOC’s properties. As such, this round of bidding represents a first step to future long-term projects. CORRE’s first mover advantage, proven technology and well-established operational setting puts the company at the forefront to lead these projects. Moreover, given Kuwait’s plans to increase production from 2.49 million bbl/ day to 4 million bbl/ day after the fourth Kuwait National Petroleum Company refinery is established, there is no telling what level future opportunities may reach.

In detailing the SEED bidding process, Gress explains that a contractor can only win one of the three contracts. Each bidder is judged on price, technology, overall operating process and effectiveness of its rehabilitation program. CORRE’s completed full scale ARES I soil washing and oil recovery equipment pilot program in Kuwait looks likely to put the company in pole position.

“While other companies have placed bids with lower prices, the lowest price isn’t going to be the sole determining factor,” Gress explained to the WSR. “The lowest price doesn’t mean you have the capability to operate according to KOC specifications.”

“I would say that we believe we’re in a competitive position; it’s likely that KOC will want a contractor that offers what we offer in terms of soil washing and oil recovery, and that’s a differentiating factor between us and other bidders that are out there.”

Put simply, CORRE’s ARES platform produces higher quality results at a more competitive price. It offers a high operating capacity, low energy use, low carbon footprint, and a closed loop process for cleaning soil, recovering oil (including the removal of salt) and recycling water. The group’s operating partnerships are ready for action: Once results are in (for the soil remediation bidding, and soon-to-be delivered tenders for the treatment of drill cuttings) the hope is that the outcome will showcase the firm as a top performer, and turn heads in other projects.

Ultimately, the opportunities for other projects can be vast. “Speaking of Kuwait and outside of SEED, we still have the clean-up of the Kuwait oil lakes. That is significant,” Gress told the WSR.

“This is the largest environmental cleanup project in history due to the resulting damage from the 1991 Gulf War which still remains to this day. So here, there’s over $3 billion of funds fully funded by the United Nations that is available to pay for clean-ups.”

CORRE is also in talks with KOC as part of the oil lakes technology and bidding evaluation process. More than 64 million cubic metres of oil-contaminated soil oil lakes remain untreated in this region alone, which sheds light on the other opportunities further down the line.

The Middle East is estimated to contain 78 billion barrels of recoverable heavy oil, and the integral part that the Kingdom of Saudi Arabia (“KSA”) plays in future production is well-defined. KSA expects to increase oil production by 500,000 barrels per day (bpd). As plans for increased output take shape, there is an even greater need for commercialised technologies capable of large scale soil remediation, sludge treatment and oil recovery services. This is a root market for CORRE—the largest construction company in the Kingdom has a 40 percent stake in the company—and  Gress says that the group is currently working with this majority shareholder to form its Saudi Arabian business structure, covering a range of total oil waste management services.

“This will include, of course, treatment of drill cuttings, oil storage tank cleaning, waste management, and soil remediation and oil recovery,” he stated during the interview.  He also highlights that the tribulations faced by many foreign groups who seek to enter the KSA market provide significant barriers to entry, but those who are successful can partake in long-term, ample opportunities. From CORRE’s perspective, this is a strategic strength of their 40 per cent equity shareholder.

Considering the work that is currently underway and plans for unchartered markets, CORRE’s short-term future includes a contract announcement—whether it’s a KOC SEED bidding success or a first opportunity in Saudi Arabia. In defining these aims, Gress mentions that CORRE’s board has a “high degree of confidence and laser-like focus on winning our first set of contracts,” and whatever outcome is returned, the team’s commitment to its target markets will remain.

“Our view, internally as a management team and as the board of CORRE, is that it’s not a question whether we will win our first contract, but rather when we will win that contract,” he told the WSR.

In these parting words, Gress underlines CORRE’s great commitment to serving the region. The company’s partnerships reflect its efforts to build the right operating landscape for future project success, and its majority shareholder, in-country offices and proven project capabilities seal the deal. Experienced, commercially competitive and home to services in ever-mounting demand, CORRE presents an ideal investment for anyone with a long-term view to the opportunities in Kuwait, Saudi Arabia and beyond.