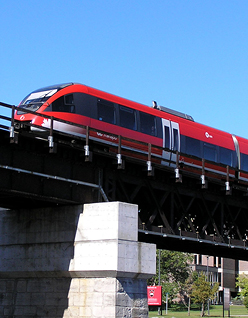 Moving in the right direction

Canadian Rail Collision & Refurbish (CRCR) was founded in 2009 by Winston Watson, President of CRCR, who set out to create the first-ever facilities dedicated to railcar repairs.

Less than three years later, the Toronto-headquartered CRCR has grown rapidly, with two U.S.-based railcar repair facilities (based in Chicago and San Diego), in addition to its Canadian presence, while the company is also eyeing worldwide expansion into both Russia and Brazil within the coming months.

Watson believes in the pursuit of this niche market, a gap in the Canadian marketplace where the railcar repair service was absent. CRCR offers services in painting trains, rather than a full-scale service offering of train refurbishment, painting both the inside and outside. CRCR focuses its expertise on painting train exteriors.

It’s no surprise that this business model ties in perfectly with Watson’s personal life motto, “talk less, listen more”. Watson told The Canadian Business Journal, “I am more of a customer-oriented individual. Everyone says that, but I truly believe that, and also preach it, because that’s how I got into the business.”

“It was brought to my attention that Bombardier had about 127 units where side panels weren’t fastened properly, with some rust and corrosion on the side of the panels,” Watson detailed.

CRCR proves beneficial to its customers in its ability to offer services at a lesser cost, repainting trains rather than refurbishing, which has proven valuable particularly for governmental contracts, when a budget simply doesn’t allow for a compete refurbishment. CRCR’s service makes trains look brand new for a fraction of the cost of a refurbishment.

Government work contracts are just a preview of the many big work projects that CRCR has received in its short history.

One of these big work contracts includes the need for CRCR’s services in Brazil, the host country of the 2014 FIFA World Cup, as well as the 2016 Summer Olympics, to be held in Rio de Janeiro.

CRCR has met with representatives in Brazil and plans to soon be functioning in Brazil with a facility in Sao Paulo, ready to paint units and add different services.

The company will also engage in a similar project in Russia. Watson commented, “[They] have a high demand for the service that we render, to paint Russian locomotives.”

The expansion into the Brazilian and Russian markets represents the massive growth that the CRCR has achieved since its initiation. In order to accommodate such demand, the recently established facilities in Chicago and its western operations in San Diego will prove beneficial to CRCR projects.

CRCR however is not restricting itself to only the Brazilian or Russian markets, or domestic operations, but rather is open to expansion wherever its services are needed. Though, CRCR modestly attributes much of its success in its young history as simply being in the right place at the right time.

Watson is also quick to attribute the success of the company to the employees of CRCR.

“It is not me that makes the success,” Watson said. “I am a strong believer that I work for [them], they don’t work for me. Without them, I wouldn’t be where I am. It’s about customer service. When a unit comes out without any issues, that brings CRCR up to the phenomenal work and everything goes hand-in-hand with that.”

The company has established a niche market in repainting trains in need of a touch up. While other businesses and facilities have grown into multi-faceted focuses on a variety of services, Watson believes CRCR has thrived in being a “bottom feeder”, establishing its place in a market where the company has no direct competition.

“Others are more concentrated on refurbishing locomotives inside and outside, but not just painting, because they do not think that there is enough money [in the market] for this service,” Watson said. “We’re here to render our service to whoever needs it.”

Looking toward the future, the goal for CRCR is to further its global expansion, becoming a global name. Among the many expansion markets currently under consideration by CRCR include Saudi Arabia and Syria. Watson commented, “Wherever the market allows us to grow, we will be there.”