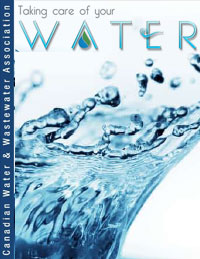 Taking care of your water

It used to be that average Canadians would only think about tap water when deciding how long to run it before it was sufficiently cold. Few people thought about potential chemicals or contaminants floating in the water. Now, the public is much more careful, dramatic even. We drink bottled water and have supplementary filter systems on our taps or in refrigerated containers. Of course, emergency situations like the Walkerton Tragedy have done little to put suspicion to rest.
Ideally, Canadians should strike a happy medium between not caring about water quality at all and being overly cautious, sitting comfortably at a level of educated awareness. At least, that’s what the Canadian Water and Wastewater Association (CWWA) would like to see.

Founded in 1986, the CWWA is a not-for-profit organization that represents the common interest of Canada’s municipal water and wastewater systems to federal and interprovincial bodies. Recognised as a national voice of this public service sector, the CWWA’s objectives are clear: to advocate sensible policies and relevant legislation; enhance partnerships, networking and information flows; encourage effective research; create better public awareness; and correct misconceptions.
While their priorities lie first and foremost with public safety, the CWWA has little interest in catering to alarmist perceptions of water quality. Duncan Ellison, Executive Director at the CWWA, deals with water issues every day sees no reason to mistrust tap water. “Our water quality standards are very high,” he assures. Ellison explains that over the past few decades, there have been significant increases in the number of water quality guidelines in each province. “In one province, for example, the drinking water used to have only four parameters with which it had to comply; now it has over one hundred.” Indeed, there has been an increase in the amount of contaminants municipalities check for. Along with more tests comes more treatment processes needed to ensure said contaminants can be removed.

Increased focus on wastewater
Higher quality standards are not limited to drinking water. The same care is beginning to occur on the wastewater side, as well.

In earlier years, the focus of wastewater treatment was to address the biological issues of chloroform and other pathogens. Now, it’s shifting more intensely to phosphorous and nitrates, which cause unhealthy vegetation in river systems and affect the aquatic system itself. There’s also an issue of heavy metals coming from industrial discharges that find their way into sewers.

“Our wastewater standards have even increased to detect pharmaceutical or personal care product residuals,” says Ellison. “If we take a pill and some of it leaves the body unconsumed, it ends up in the wastewater system, then the river system and finally it comes back to drinking water. We have the ability to identify those residuals and avoid potential risk.”

Although it’s great that we have the skill and technology to remove these contaminants, it does raise the question of its implication. “Our ability to detect these things is exceedingly precise, but what’s the significance?” he asks. “What is the effect of consuming water that has one millionth of an aspirin in it? Does it make a difference? We don’t know.”

“It seems our ability to find the presence of chemicals in a water system is moving much faster than our ability to assess the consequence of the detection,” Ellison continues. “It used to be that parts per million was an adequate level of water quality detection and now we’re down to parts per billion—in some cases, parts per trillion.”

Despite our uncertainty about the effects of residuals, the media can be relentless, publishing headlines that read “Pharmaceutical residuals found in drinking water”. The public reacts accordingly, panicking about the safety of their tap water. “The problem with these reports is they drive regulators and their political leaders,” says Ellison. “The Minister of Environment reads the headlines too. He knows the opposition will come to his office and ask what he’s going to do about it. Then time and money is spent on something we don’t fully understand.”

Assessing risk
After seven people died and 2,500 people became seriously ill from contamination in the Walkerton, Ontario water supply, it seems reasonable that the public started paying more attention to what they were drinking. For the CWWA, however, Walkerton was an example of incompetence that resulted in millions of dollars in added expense to utilities that never had the problem, as well as further misconceptions about drinking water safety.

Ellison uses the Walkerton case to elaborate on risk assessment and subsequent budget decisions. To him, the provincial governments reacted to panic and threw money at a problem that was situation-based and contained to one community.

“Risk management comes down to the most feared situation,” Ellison maintains. “Millions are spent to prevent uncommon events that are frightening, yet less money goes to preventing every-day incidents, such as car-related deaths. All of us jump into our vehicles confidently, even though we have no idea what’s coming ahead. Still, we spend more money on airline accidents and nuclear accidents. We just don’t seem to be able to do these comparative risk analyses, and that’s the same with water quality.”

Yes, there are situations that occur from time to time in which water quality is compromised—when there is a massive rain storm or flood, for example. But even then, most cities inhibit those risks by taking corrective action. Ellison points to a major city in Western Canada in which the municipal government told the public to reduce all consumption of water. “They were slowing down the treatment process to ensure all the water that survived the process was safe,” he says. “There are measures to do things like that, and cities will do everything necessary because they are public servants.”

Looking ahead
The CWWA is a public service that will continue to be a relevant and necessary as drinking water quality parameters are revised and treatment technology develops. “There is a continuous evolution in regulations and public expectations about the water quality delivered and wastewater discharged,” says Ellison.
In the works now is an initiative to form harmonious position policies and regulations on the use of wastewater residuals (popularly described as biosolids). “These organic materials that survive the treatment process, can be used beneficially in agricultural land supplements, if properly treated,” Ellison explains. “We can recover things like phosphates and nitrates from the wastewater as crystalline chemicals and use them to replace the ones being dug out of the ground in Saskatchewan and sold as fertilizer.”

“Interestingly, the world’s phosphate association predicts that there are 100 years of known phosphates in mine reserves,” Ellison adds. “The ability to recover these nutrients from wastewater and reuse them will be essential, if we’re going to meet agricultural production in the future.”

No matter what the future brings, the CWWA will continue to make water quality its number-one priority, ensuring water systems are closely monitored and regulated by provincial and territorial governments. As such, the organization hopes that people develop a higher level of confidence in their drinking water.
“The CWWA wants the public to understand that the people who work in this sector are professionals who are dedicated to delivering safe drinking water because they drink it themselves,” says Ellison. “Their families drink it. That’s something we want people to appreciate. We have their best interests in mind.”