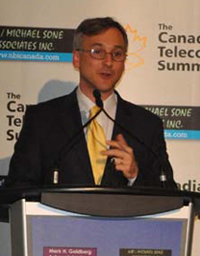 More than 500 senior executives from within the telecom, broadcast and information technology industries were among those gathered at the annual Canadian Telecom Summit held at the Toronto Congress Centre.  The primary goal was to share ideas and discuss trends and how the sector must work together with both government and the private sector to achieve new levels of innovation, which will have tremendous benefits to the national economy.

Former New Brunswick Premier Bernard Lord, who is now president and CEO of the Canadian Wireless Telecommunications Association, has the unique perspective of seeing things from both sides of the fence.  He focused much of his keynote address on the state of wireless communications.

“We all want to ensure that Canadians are able to enjoy their wireless devices across the country from coast to coast to coast,” Lord said.  “Carriers continue to build and expand their networks and respond this tremendous consumer demand for wireless phone and Internet services.”

As of now, more than 26 million mobile wireless devices are in circulation in Canada.  It’s a number that has continued to see significant growth each year.
“We expect to exceed over 100 per cent penetration in the next few years,” Lord noted.

Perhaps we have been spoiled, but through amazing advancements in technology, Canadians have now come to expect the advantages of high-speed and wireless services – and they want to have this capability everywhere, and at all times.

The wireless communications products and services used daily by police, EMS, firefighters and other first responders have become an integral part of Canada’s public safety infrastructure.

There are more than 13,000 wireless antenna sites throughout the country.  As a comparison: in the United Kingdom, where the geographic coverage area is less than one-fifth that of Canada’s, there are about 52,000 sites.  Displaying excellent levels of efficiency, Canadian carriers cover five times the communications area with one-quarter of the sites.  Carriers have also employed infrastructure sharing agreements to reduce the need for additional sites, although there has been a lot of ongoing debate between the bigger companies and the smaller ones in terms of how effective that shared initiative really has been.

However, there remain considerable challenges for the wireless carriers in delivering network capabilities to their customers.  It’s an issue the industry is well aware of and addressing.

“A large portion of the industry’s capital expenditures is devoted to improving network availability, both in terms of coverage and capacity,” Lord said.

As the industry begins to mature, Lord noted the noticeable change in trends regarding when and where many customers use their wireless devices.

“As much as 40 per cent of mobile data is consumed in the home,” he confirmed.  “In order to meet this demand, wireless facilities now need to be located closer to residential areas than ever before; and this is a significant shift in recent years.”

Without new networks and new sites, holes begin to appear and that creates dead zones, leaving a customer frustrated with either a dropped signal or no signal to begin with.  As our communications devices become more complex, so too do the requirements placed on the wireless industry to drive the signal from one location to another.

As a wider demographic of Canadians move over to the higher powered smartphones and tablets, the result is far more strain on the wireless backend to push the increased data through, advancing now at an exponential rate.

The rise of mobile data consumption is a global phenomenon.  Forecasts show the data traffic is set to increase.

“Some of our networks increase at a pace of 5 per cent every single week,” Lord emphasized.  “Most other sectors of the economy would be thrilled with 5 per cent growth for the year.”

Industry Canada recently released a study that estimates data traffic is projected to grow up to 30 times between 2010 and 2015.

The erection of antenna structures hasn’t been without controversy in some instances, particularly in cases where the plan is to construct near residential areas.

Some members of the public have openly expressed concerns about health and safety and aesthetics in their neighbourhoods, which they opine also has a direct effect on property values.

“Unfortunately, some small groups or residents can create unwarranted objections and delay bringing the best and fastest networks to their community,” Lord commented.  “Canada’s wireless providers have worked with many communities to address these concerns and develop protocols to clarify local expectations and preferences.”

“We don’t want more roadblocks – because Canadians want these services now,” Lord emphatically said.  “If we continue to face roadblocks the real losers are communities and wireless consumers.”

Canadians love their mobile devices and are consuming more data and bandwidth than ever before.  To be able to continue to meet the technical demands, having the proper infrastructure is vital, including: more spectrum, sites and practical regulation.