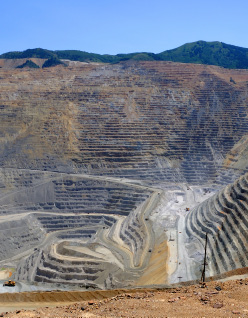 Through further resource definition and aggressive exploration drilling on two advanced projects, one in NE California and one in mining synonymous Nevada—complete with a solid base of historical copper oxide resources ripe for taking to NI-43 101 compliant standards, identified oxide mineralisation upside, sulphide porphyry copper mineralisation and a sulphide resource—Canyon Copper Corporation (“Canyon”) (TSX-V: CNC) (OTCBB: CNYC) is fast-tracking towards production and expanding its resource inventory with bulk tonnage copper sulphide upside along the way.

Combining copper’s outlook as demand continues to outstrip supply, with leaching oxide copper and making premium copper cathodes, takes advantage of favourable capital and operating costs, gives some insulation from concentrates pricing, smelter treatment and refining charges. This suggests that Canyon can be an explorer-developer with well sized projects and the corporate and technical management team is well-placed to drive it forward. The months ahead will see Canyon establish a new NI 43-101 compliant copper oxide resource estimate for the Moonlight property in Plumas County this summer, as well as improve on historical findings and drill test various copper oxide mineralisation identified at the wholly-owned circa 26,000 acre New York Canyon project in Mineral County, later this year.

Canyon president, Benjamin Ainsworth, admits that Canyon’s stellar know-how comes with “a few tree rings” of experience grown through time. But its proverbial roots extend decades down through the development history of these interesting copper properties and the substantial opportunities they present.

“I worked for Placer Development (now part of the American Barrick family) when Moonlight’s historical oxide and sulphide resources were being drilled. That put us in a strong position to recognize the potentials of that sleeper,” he says.

“As for New York Canyon, we’ll be doing the important metallurgical work and drilling up further oxide resources for the Longshot Ridge deposit and we have lots to work with there.”

When Canyon added the Moonlight copper porphyry property to its portfolio, announced in November last year, it not only kicked the company goal to pick up a large copper/silver/gold play and an opportunity for fast-tracking production; it returned Ainsworth to a project at which he has, by all accounts, been an insider for some time. When he left Placer Dome in 1986 and the project was subsequently dropped by Barrick as it was not perceived as being a major gold resource, it was picked up by one of his acquaintances.

“The claims sat there for a number of years, during which I went to visit them. I was already familiar with it, having known and worked alongside the people responsible for the initial ore reserve calculations done in the early 1970s,” he recalls.

“One of the team was an excellent mathematician and geophysicist, and I had good faith in the data he produced.  As you can see, there are a couple of twists in this story.”

These twists include Ainsworth’s company experience during Placer’s drilling which largely comprised of vertical holes. Later teaming up with David Jenkins—the man who would become president of Moonlight’s next owner, Sheffield Resources—Ainsworth put together what became the underlying deal for the project to change hands again.

“Sheffield noticed that there were one or two steeper structures running much higher grade than the overall mineralisation and began doing a bit of angle-hole drilling,” he says.

“That returned some numbers which were substantially bigger than those that Placer had received.”

At Moonlight, Canyon now benefits from both Placer and Sheffield’s efforts, the project’s large sulphide target and surrounds, including established logging infrastructure—but it is the historical indications of near-surface copper oxide that present the fast-trackable, comparatively cost-attractive production opportunity and that are the subject of a priority drill programme planned for this year.

“A lot of the holes in that programme will be less than around 60 metres deep, so we can easily conduct them with an RC rig,” Ainsworth says, elaborating on why Canyon can be quietly confident about maintaining low capital and operating costs thanks to copper oxide’s amenity to heap leaching, as it drives Moonlight into output mode.

At the New York Canyon project, situated some 30 miles east of Hawthorne, Canyon has more history to consider in the form of old workings. There’s also Conoco’s extensive 1970s efforts—“when ‘big oil’ decided to become ‘big minerals’,” Ainsworth says—which used a wide spaced drill grid and failed to identify the smaller but much higher grade skarn deposits that may be closely associated with the much larger copper porphyry targets that they sought. Conoco did identify some other interesting deposit features including the Longshot Ridge copper oxide deposit and an area with good potential for porphyry style mineralization lying on the north side of the Copper Queen skarn claims.

The additional potential of the Buffington Springs and Power Line showings was identified by current management and both were acquired by staking in order to access other oxide occurrences that could add more tons to the Longshot Ridge operation.

Assays from a 2006 drill programme on Longshot Ridge are now under compilation prior to further drill testing of the oxide mineralisation to the north and northeast of Longshot Ridge and the two aforementioned areas where reports indicate that high grade copper was hand-mined.

“We’ve re-assayed the 2006 drill samples last year and got a good number of drill intercepts above the cut-off grade used in the earlier resource estimate. We plan to get another independently run resource estimate done which should add something to the inferred and indicated resource estimates,” Ainsworth says.

Behind both Moonlight’s and New York’s histories, entwined with Canyon’s senior management, stands a solid exploration and development philosophy worth noting. This junior in possession of two sizable projects in a top tier mining jurisdiction has a superabundance of reliable and repeatedly tested drill data, old resources and project history; a valuable bank of knowledge enabling its technically and commercially seasoned team to spot the opportunity that fast-tracking copper oxide production presents, as well as the potential to continue with the development of the existing sulphide resources and prove up more of this bulk tonnage ore.

Plans are to establish an NI 43-101 compliant copper oxide resource at Moonlight and comprehensively assess copper oxide potential for Longshot Ridge and all the other New York oxide showings. These plans are founded on superior understanding of what is capital and operating cost effective, based on tried and tested technology and the underlying market fundamentals. Aggressive exploration is well justified. And “with good results prevailing, as Ainsworth says, when you have a well-engineered situation, you can begin to look at the various financing options to get into production.” The pieces, the math, the geology and the management team fit very well, and that should shorten the path to production.