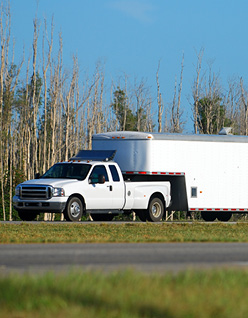 Founded in 1977 by the husband and wife team of Hank and Elaine Funk, Cap-It International was first known as Rover Recreation, a supplier of recreational products such as pool tables, trampolines, and hot tubs.

Expanding as a franchisee to Dufferin Pool Tables and Pool Mart, Rover Recreation owned multiple stores and gained valuable experience with a franchising model since duplicated into the modern success known as Cap-It International.

Rover Recreation’s third product segment, retail of truck canopies, became popular, as did other truck accessories, in the 1980s. With that, a new industry was born and it was not long after when Rover Recreation decided to pursue this new industry, divesting its recreational business and establishing a focus on truck accessories – rebranding itself in the process – in ultimately creating Cap-It International.

Today, there are 22 Cap-It franchises in Western Canada, a number that could potentially double in the next five years. Cap-It hopes to continue its expansion outside of Western Canada – all current stores are situated in British Columbia and Alberta – but with the need for local distribution centres, expansion has been a methodical process, and other opportunities still exist in the large and small markets of Western Canada.

“Our business model requires distribution support and delivery within a day or two at the most, so it isn’t just a simple matter of opening a store,” Robert Skinner, Vice-President of Franchise Development with Cap-It International, told The Canadian Business Journal. “The investment to enter a market is a lot more than just opening stores; it also means opening more warehouses.”

The company has gone through a growth spurt in the past two years, its initial growth contributing to its ability to diversify and offer an ever-growing selection of products. Growing to 20 stores has now allowed Cap-It to advertise through television as a means for even further growth in sales in the stores as well as in franchise interest in new markets. Additionally, the company projects that it will open “seven or eight” new stores in 2012 and into next year, more than the number of stores it has opened in the previous five years combined.

What’s different about Cap-It International from a typical automobile accessories store is its customer friendly look and feel – home to an upscale retail image plus a high level of customer service and attitude. Such a business and format has never existed in this sector.

“I liken it much like a Home Depot,” Skinner said. “In the past there was always the small hardware store, the lumber yard, and the gardening store, and then all these standalone smaller businesses were put under one roof. Cap-It International has done the same thing. It is a unique company because there isn’t any other franchise that is quite like this business model. We’ve taken a fractured industry, made it uncomplicated and put it all under one roof.”

What kinds of products are found at Cap-It International? From trailer hitches, to tool boxes, to roof racks, to tires and wheels, to its classic canopies, Cap-It offers “every imaginable thing that you can hang on the exterior of your truck” to make it more functional for work or play. As Skinner summarized, “The truck accessories industry is massive and growing.”

Still, as part of the automotive industry, it’s no surprise that Cap-It felt the effects of the recession that cut deep in the car and truck sector. Skinner detailed, “In Canada, the impact from the recession was on the auto dealers, one of our significant customers, as they were not able to get trucks to sell. The effect of the recession was dramatic in the marketplace but what we had done was that we had so much diversification that it saved us from major impact, with different lines that we had introduced for sale, plus we were growing so that lessened the impact for us. We were affected but primarily less than the market overall.”

Cap-It International was founded on a vision that understands the growing market for truck accessories. Cap-It retails with its customers in mind, displaying its variety of products in a retail showroom, rather than the automotive industry standard of a commercial parts counter sales environment. Cap-it also installs everything it sells.

“A big part of what we do that is different from everybody else is that we focus on franchisee development, both in their skills to service their customer and to operate their business successfully,” Skinner concluded. “It is a very unique franchise for businesspeople. It’s sort of like running a candy store for trucks, as most of the people who come into our stores aren’t there for repairs and maintenance. This is all about dressing up their vehicle for work or play and from that point of view we offer a unique franchise, business, and lifestyle opportunity.”