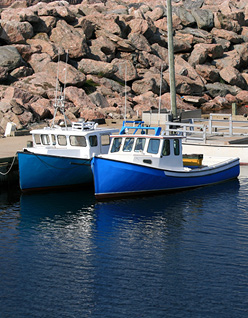 100 years of bringing business together

For over 100 year, the Sydney and area Chamber of Commerce’s vision of a strong and unified business community, prescient leadership and effective management has shaped the regional economy. Today, the Chamber continues to advocate on behalf of the business interests of the community, guiding the area through periods of resiliency and sustainability.

No greater testament to the work of the Chamber is the region’s growing global reputation for sustainability. Landmarks institutions of Sydney, including the Canso Causeway, the Fortress of Louisbourg, and the tourist association (now known as Destination Cape Breton) would not exist were it not for the Sydney and Area Chamber of Commerce.  And certainly business has benefitted from both small and large scale projects, such as the elimination of long-distance telephone calls between Cape Breton communities and the development of the Sydney Harbour.

The Chamber’s effectiveness is thanks to decades of citizen dedication whose passion and pride of the area has turned into tangible progress. Never was this more of a challenge than in the 1990s, and in the period between when a dramatic shift in the Cape Breton economy saw the closing of many of the area’s fabled coal mines, and the emergence of sunrise industries surrounding innovation, knowledge, tourism and renewable forms of energy.

The Chamber works diligently to promote the Nova Scotia Department of Energy’s vision to capitulate Nova Scotia Power into a leader in the renewable energy industry by 2013 and a national leader amongst the provinces.

Now 600-members strong, the Chamber continues to advocate for the region, participating with the local, provincial and federal governments to further the interest of local business development.

Chamber membership has key value adds like advertising, discounts, and a high profile within the business community and business interest groups. The Chamber acts as a high-profile advocate to the wants and needs for a healthy sustainable business, while recognizing the problems and difficulties businesses face day to day. “We kept business interest in the forefront of public sector organizations and city councils legislatures so they get that representation in addition to the participation of getting involved with a number of key activities, social activities and self-promotional events,” says Jim Paris, President of the Sydney and Area Chamber of Commerce.

Speaking with Paris on the emerging diversity of the region’s economy, he says “This is an interesting community that has been through great transition between steal plants and coal mines which are pretty much closed, were replaced slowly but surely by service and sunrise services. Things have been growing here ever since.”

High on the Chamber’s priority list is improving trade through scheduled updates to air transit, rail links and highway infrastructure, not to mention a mega project on the Sydney Harbour. Scheduled to be complete in early 2012, the ambitious project will see more than 4 million cubic metres of seabed removed from the access channel to allow access to some of the world’s largest vessels, further opening trade opportunities for local business.

The $38 million price tag will be paid for by the federal government ($19 million), with the Nova Scotia government paying $15.2 and the Cape Breton Regional Municipality committing $2 million to deepen the harbour channel. Prime Minister Stephen Harper estimated the additional ship traffic will create thousands of short and long-term jobs. “By dredging Sydney Harbour, we can unlock Cape Breton’s true economic potential,” Harper said in a news release. “This will allow bigger ships into the harbour and create jobs in Cape Breton for the long term.”

Premier Darrell Dexter agreed, saying the project is an “opportunity to create real and positive change for the economy of Cape Breton.”

The Sydney Harbour project has buoyed spirits, says Paris, who is giving a virtual tour of Cape Breton with his vivid descriptions of the harbour, the shops and restaurants. Paris tells me he is “from away”, having moved to Cape Breton from North Carolina and hasn’t looked back.

That evening, Paris attended a function hosted by the Cape Breton University’s Centre for Sustainability in Energy and the Environment, who is welcoming three Chinese government officials who are interested in the clean energy efforts of the centre.

“The university is slowly but surely becoming a centre of sustainable energy in which development and research is being done relative to clean energy,” he says. “The centre will play a large role in our future. You have to have an integrated economic plan to truly develop an area so it’s not one silver bullet, but a number of key activities that will sustain the area over time. Sustainable energy is clearly one of the key things which the world is demanding, and we have a world-class centre right here.”

Nova Scotia itself turns heavily toward clean energy research and development. We have a real opportunity here to become singularly expert at this critical science from a global perspective—it truly in an investment in tomorrow. If Cape Breton can lead the band with that then certainly the world will come to our doorstep.”